The Death Of Female Bodybuilding!

I do think female bodybuilders have a right to train, pose, and even take steroids if they wish, my problem is they think we should all approve and pay money to see them. Female bodybuilding has difficulty retaining and attracting sponsors. Learn why.

I'm looking at the inside cover of the book Winning Women's Bodybuilding by Laura Combes. As well as being a guide for bodybuilding training and nutrition, the autobiographical book describes how Laura won the Ms. Florida and first Ms. America titles in 1980.

Inscribed on the inside cover of my copy of her book is, "To Richard, whose friendship, knowledge, and encouragement made all this possible - Much love, Laura."

On page 10, Laura says, "Richard was one of the first major male bodybuilders to come out in favor of a muscular look for women. He took me under his wing and within a year had taught me everything about bodybuilding and training and diet that had taken him a lifetime to learn."

The fact is that I have always thought weight trained bodies were aesthetically superior to those that were not. Maybe it is the influence of Greek sculpture and painting that I have admired all my life, but I have always felt humans are most godlike when physically fit and shapely, and nothing shapes bodies like resistance training. 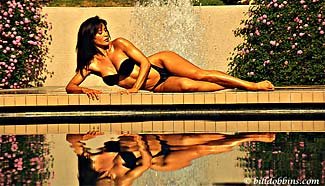 Rachel McLish in 1992 after leaving the sport.

The point I'm making is that I have always been a proponent of weight training for men and women, but let me clarify this support for female bodybuilding by saying loudly and clearly, I have NEVER advocated that women train to look like men. I have especially opposed women taking male hormones to do so.

In fact, female bodybuilding within its first couple of years took a direction with anabolic steroids that dismayed me to such a degree that I predicted that if female bodybuilding continued this trend, it would die out. With the use of male hormones, the women were no longer building a muscular female body, but rather masculine looking muscle on a female body.

In addition, along with the male muscles came the transformed face where female facial characteristics were erased and replaced with the distinct look of a testosterone face. Female bodybuilding when dominated by male looking bodies produced with male hormones would take on a freakish element supported by only a fringe element of society.

Ultimately, I really have no problem with female bodybuilders looking any way they please. I don't have to like everything everyone else does. In fact, I will defend female bodybuilders' right to go in any direction they want with their bodies. I loved Laura Combes like a sister and enjoyed helping her achieve a historic place in bodybuilding history.

Yet for me the ideal female body has always been one with firm athletic legs and a toned upper body. I've always disliked the fact that female bodybuilding mimicked men's bodies and men's posing routines. Is the most muscular pose truly the method to best display a trained female physique?

While I think female bodybuilders have a right to train and pose and even take steroids if they wish, my problem is that they think we should all approve of it and pay money to see them. Unfortunately, most of us find it too extreme. Female bodybuilding has difficulty retaining and attracting sponsors.

Top female pros such as Kim Chizevsky and Kathy LeFrancois Priest are leaving female bodybuilding behind and getting into fitness and figure. Local contests, the springboard for future female competitors continuing the sport, see few women entering the bodybuilding arena. Is there a future for female bodybuilding?

Female bodybuilders in their attempts to defend themselves, use two basic arguments:

Hello, you are taking MALE hormones! Are the guys taking female hormones? You are attempting to look like a man by taking male hormones!

Not so-highly trained women without taking male hormones-or without a natural high level of testosterone-do not have large traps, delts and pecs with no breasts. I admit that there are some women who have higher than normal levels of testosterone resulting in mustaches, big traps, big delts and big arms, but these numbers are limited.

I thought the fitness contests might save female bodybuilding, which was the original intent of the powers-that-be when they couldn't find sponsors for even the Ms. Olympia. Fitness was supposed to bring the sponsors back to the females and it did. The tragedy is that fitness lost its pure bodybuilding roots when it became more of a cheerleading and gymnastics competition.

It rather reminds me of the old days of the Mr. America contest when there was an interview and bodybuilders had to earn athletic points by participating in some sport.

Unfortunately, fitness did not provide an answer for hard training females without the dance and gymnastics background.

In contrast, with eight deep classes of figure competitors at the Southern USA, the stage is set for female competition in figure to expand and create exciting competition at state and national levels. For all of us who love weight training, figure could be the answer to provide the competitive arena for female lifters to propel the sport into the future by presenting a sport that is exciting, yet not extreme or freakish.

Critics of figure argue that naturally lean and young women can successfully step onto the competitive stage without engaging in resistance training. While this may be true in rare situations, most of the women will still have to diet and train rigorously. Contest judges can influence this particular criticism by awarding trophies only to women with some developed muscle.

Yes, figure may be the answer, but it still faces challenges with the narrowness of presenting physiques through simplistic quarter turns and in a standardization of the line between figure, fitness and female bodybuilding. Consistency of a clearly defined delineation between the three areas allows the females to choose an area that maximizes genetics, set goals and train accordingly.

With the three distinct areas, previous obscure parameters that were feeble attempts to redefine bodybuilding to attract sponsors and ticket holders can be eliminated.

Clearly defined boundaries for figure, fitness and bodybuilding will provide each area of female training the opportunity to utilize marketing strategies to create a niche, market to the target audience, increase revenues and insure the future of female physique contests.

Coming Soon! Are you a baby boomer that's taken your legendary physique to the contest stage? We are working on an article that features the legendary physiques and the secrets of success of fellow baby boomers that enter bodybuilding contests. Send us an email with your name and photo(s) for consideration.

Be sure to check out Diane and Richards site www.legendaryfitness.com.

All submitted photos become property of Legendary Fitness, LLC; submission shall constitute a grant to the use of your photos and information as we deem appropriate.

The advice given in this column should not be viewed as a substitute for professional medical services. Before undertaking any exercise or nutrition program, Legendary Fitness, LLC advises all to undergo a thorough medical examination and get permission from their personal physician.

From the babyboomers in your 40s and 50s and beyond, this new section of Bodybuilding.com will focus on improving your physique through nutrition, car