Atlas Stone Training: The World Is In Your Hands

Train with Atlas stones to get stronger, more explosive, and more powerful. Whether you're a fighter or just want a fit physique, you can train like a Titan.

Former Strikeforce and K-1 heavyweight champion Alistair Overeem recently accredited his gargantuan frame to training with Atlas stones. Atlas stone training is certainly a tried and tested workout used by MMA's strongest athletes, but can it work for you? The answer is a resounding yes!

Atlas stones are most commonly associated with the World's Strongest Man competition, though they need not remain in the exclusive domain of the strongman. Their awkward shape and unusual center of gravity when lifted allows them to promote the need for strong stabilization and dynamic re-centering of an athlete's balance throughout the range of motion of an Atlas stone load.

Want to break a triangle attempt and pick your opponent up and slam him like Rampage did Ricardo Arona? If Rampage wasn't as strong as a bull, there is no way he would have escaped the triangle, let alone executed such a devastating KO-inducing slam.

Today's MMA athlete requires a solid, constantly improving level of strength. Atlas stones, as with all strongman-style implements and exercises, will help you develop this. They are fantastic for developing hip extension, explosive starting strength (simply to get them off the ground), as well as developing tremendous crushing (isometric) strength. Lifting an Atlas stone engages your erectors, lats, rhomboids, shoulders, and pecs. 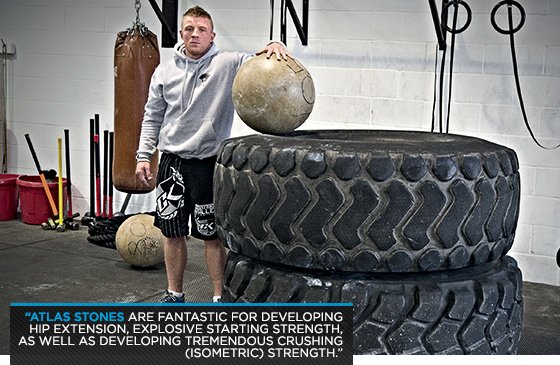 Isometric strength is of particular use to the MMA athlete. Overwhelming strength can wear out your opponent quickly. If two fighters clinch, but one fighter is two times stronger than the other, obviously the weaker fighter will tire first. When the weak fighter exerts 100 percent, his opponent can counter with 50 percent.

Despite the aforementioned benefits, Atlas stone training, like all training, should only be undertaken with professional coaching. Anyone can purchase Atlas stones, but not many people can teach you how to train safely and effectively. Mastering bodyweight drills and acquiring a solid foundation in traditional lifts such as the deadlift, squat and overhead press are essential before graduating to Atlas stones.

Atlas stones can be homemade or purchased at slatershardware.com. A quality stone is worth the investment. Protective sleeves for the forearms are recommended to keep the athlete safe, though you can certainly train without them. Competitive fighters do not need the added pain of raw, torn forearms, especially when considering the potential for infection that fighters have. Neoprene elbow sleeves or even rugby forearm protectors are cheap and work nicely.

Chalk is important for grip. It will certainly reduce the effect of sweat on your grip. If your gym does not allow chalk, you're in the wrong gym. Tacky (adhesive paste) is common among strongmen. It adds an extra dimension to your grip, but it is both awkward to apply and remove. It is better for fighters to perfect their grip using chalk; it will transfer to their handling of a sweaty opponent much more effectively.

Atlas stones lend themselves to a variety of exercises. These can include shouldering, carrying for distance, and squatting.

Use this step-by-step guide to loading an Atlas stone:

Barbell Zercher squats are used frequently within a standard MMA circuit. They require much greater hip flexion than the standard back squat, while maintaining a more upright torso. The result is increased glute and hamstring activity, as well as greater core activation because the bar is positioned in front of the body.

Performing the exercise with an Atlas stone adds even more challenge to the core and posterior chain—the lower back, glutes, and hamstrings—due to the dynamically changing center of gravity (COG) of the stone. 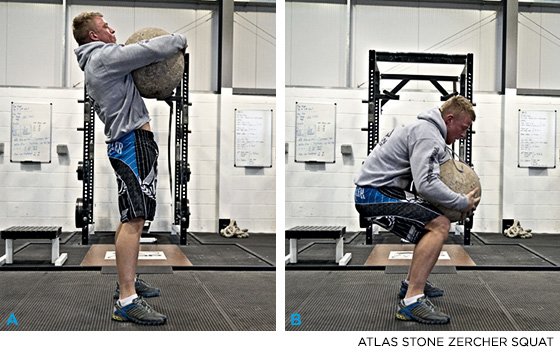 This is an advanced version of a Zercher squat employed only when the athlete is suitably developed and stands to gain something from the exercise. Follow the steps below to execute correctly:

Atlas stone loading can be used to develop maximal strength with heavier stones. It can be used to develop strength endurance by performing multiple reps of a lighter stone (or series of stones) for time. Both qualities will carry over to your fight strength. In choosing what weight of stone to use, it is important to take into account strength and competence with Atlas stones. Atlas stone training can play a great part of a fighter's strength program. You just need to be smart about when and how you implement them.