Amateur Bodybuilder Of The Week: Chris Gave A Kidney And Became A Bodybuilder!

Chris knew his father-in-law needed a new kidney and was shocked to find he was a match. After the surgery, Chris found motivation to take the stage, and won!

I never thought about competing in a bodybuilding show or any kind of sporting event. But that changed March 6, 2012. I decided to give my left kidney to my father-in-law who had his kidneys fail about three years prior. He was dying before my eyes and I had to help. After losing my father to a heart attack in 2007, I didn't want to lose another person I loved when there was something I could do about it. I was tested by the transplant center and I was a perfect match for my father-in-law. The doctors were dumbfounded that we matched so well.

While I recovered at home for eight weeks I lost 20 pounds and I looked sickly. I decided to do something with a new lease on life. I started doing some research on how to start eating right and finding a workout plan I could use. Then, June 20, 2013, I started working toward a goal to get a six-pack.

All I wanted out of the plan was a six-pack. One day I was approached by a bodybuilding show promoter about entering a competition. I told him I wasn't the kind of person to show off, and I was afraid of being judged by perfect strangers. When he asked me about competing in a show, though, he planted a seed. I was in the last phase of my program. When he asked again, I said "Yes!"

What was I in for? The show was in three weeks. I started posing like crazy, ordered my suit, and made all the last-minute prep needed for the show. Wow ... the show was a success. I came in at 169 pounds and 5.5% body fat. I had entered the Novice Middle Height class and Tall Open class and won the Middle Novice class (out of 5 competitors). I was overwhelmed by wining first place on my first try. I never thought I would win.

The judges called the Novice Short, Middle, and Tall first place winners up to the stage. I thought it was for a photo or something else. It was a pose-down! I had no idea what to do until the other guys started hitting some poses, so I started posing also.

I didn't win the overall, but I still had a chance to compete in the Tall Open class. After going through the posing again for the Tall Open class I felt good. I gave it my best and my father-in-law was in the audience cheering me on with his new kidney, my old one. I felt like a winner just making it to the stage. 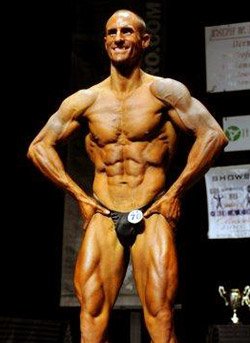 "I challenge myself every day. I push past what I think I can do and do more."

I have so much more self-respect. It taught me self-discipline. I challenge myself every day. I push past what I think I can do and do more. Research on training and nutrition is one of my hobbies. I don't compare myself to anyone; I just compete against myself and make sure I beat my personal best every time. I enjoy helping others and inspiring them after they hear my story.

I have self-motivation. That's what drives me. I'm my own worst critic. I have to outdo myself from the last workout. Each day is like an internal competition.

I want to take my body as far as I can. Bodybuilding isn't something you do as a fad, it's a lifestyle and I love it. I hate it, then I love it. I never stop pushing myself. 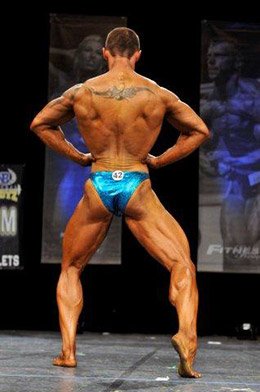 I'm the only one who can do it, who can make me a bodybuilder. I can't rely on someone else to do it for me. I like the challenge. It's hard at times, but I enjoy the challenge. Self-motivation is the key.

C.T. Fletcher is one of my biggest bodybuilding motivators. I look up to Phillip Ricardo Jr. because he's a natural bodybuilder and what he is trying to do for the sport. I get inspiration from Kiyoshi Moody, who overcame an injury to become one of the greats. In my case, I overcame a major surgery. I know with hard work and dedication I can make it to the top of natural bodybuilding.

I couldn't have got to this point in my bodybuilding career without Bodybuilding.com. I can find workouts to fit my ever-changing needs. I can't get enough of the recipes. I love trying all the different type of recipes. I find myself using what I learn from the articles in the gym and the light bulb goes off. Why haven't I been doing this all along!