Amateur Bodybuilder Of The Week: Taking The Big Leap

After 15 years under the iron, Tony was finally convinced that he had a winning physique. What he did next changed his life forever.

As a high school junior I was skinny, 5-foot-9, and a paltry 130 pounds. That year, I decided to begin my weightlifting journey. I had a lot of friends in school and I was intellectually gifted, but I lacked confidence in my physical appearance and overall strength. I tried for years to eat my way into gaining some weight, but regardless of how many calories I consumed, I could not add any size to my skeletal frame.

After doing a great deal of research, I decided weightlifting might be able to help me add the size I desired. I asked my parents for a simple bench and barbell set for my 16th birthday, and began lifting every day that summer. I didn't know much about what I was doing, concentrating primarily on upper-body exercises that targeted my chest and arms, but I went after it like my life depended on it. By the end of the summer I gained nearly 20 pounds of lean muscle mass, and when the new school year started my friends and family were astonished by my transformation.

I then stood 5-foot-10 and weighed approximately 155 pounds, sitting at an estimated 8 percent body fat. My confidence skyrocketed and I finally felt content with myself. From that point forward I was hooked. As my physique continued to evolve along with my training approach and knowledge, bodybuilding became part of my persona. The athleticism that resulted from my training allowed me to become a star player in several sports, and further stoked the fire I already had within. My athletic ability and muscular physique became part of who I was. It was the new me, and it continued to motivate my aspirations for additional development. 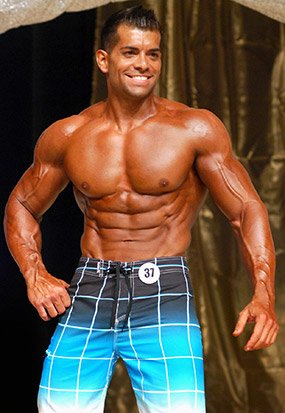 "My athletic ability and muscular physique became part of who I was.
It was the new me, and it continued to motivate my aspirations for
additional development."

I continued to train regularly 3-4 days per week. I slowly but surely added lean size to my frame for the next 15 years. At the age of 35, I ultimately reached the 200-pound goal I set for myself a few years before, while remaining under 10 percent body fat. At the beginning of 2014, I joined a new gym—Powerhouse in West Palm Beach, Florida. It was nice after training in solitude at home for several years.

I had a lot going on in my personal life and was getting bored, complacent with my existing training routine. I was looking for a fresh start and some new motivation. I wanted to be around and train with others who shared the same passion for the iron and fitness. After a few weeks of training at the gym, I befriended several bodybuilding athletes, and a recurring theme of conversation regarding the potential I had to compete in the fairly new men's physique bodybuilding division became an almost daily subject. I thought to myself, "No, not me." I'm a 35-year-old software designer with four young children—2 sets of twins, ages 2 and 6—and a full plate of daily professional and family obligations.

I thought there was no way I could compete with the typical athlete in this category. These guys are in their mid-20s and live and breathe this industry. They are personal trainers and fitness models. This is literally their career; they work in gyms, train clients, and have the time to properly execute their nutrition and get the necessary rest required when they aren't in the gym.

In March, a local bodybuilding competition—a national qualifier—was scheduled to take place a few miles from my home, and with several of my new gym friends competing, I decided to attend and offer my support. As I watched the men's physique classes take the stage, I began to see why my ability to compete in this division had been suggested by so many friends at the gym.

I remember sitting there thinking I was almost ready to step on stage right then with those guys and be competitive. The rigorous process of preparing for a show could be that new source of motivation I was looking for. Putting the work in to not only be competitive, but win a show, could be a new goal more radical than any other I had set for myself in the past, allowing me to take my physique to the next level I knew was there. That night as I left the convention center, I decided I would become a competitive bodybuilder. 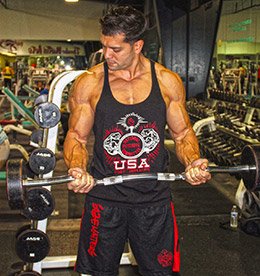 "Even though I physically exhaust myself, I feel like it is therapeutic mentally and a positive form of stress relief."

It's my free time. It's the only time of the day I have to myself. It's when I'm free to do what I want and it's how I unwind. Even though I physically exhaust myself, I feel like it is therapeutic mentally and a positive form of stress relief. It's a time I can put my headphones on and be "alone" with my own thoughts.

The individuality of the sport fascinates me. It's just you against yourself. You don't need anyone else to perform, and you don't depend on anyone else for your success or failure. It's an art form. I'm working to perfect my body and create a masterpiece that can be appreciated by myself and others. The weights are my chisel and brush, and my body is the sculpture and canvas. There is no limit to what you can accomplish and create when you apply yourself and put everything you have into it.

I always dreamed of becoming a professional athlete. I played many sports growing up, but wasn't good enough in any of them to take it to that next level. It took me 35 years to come to the realization that I was destined to become a bodybuilder and a professional in this sport. I believe every professional athlete is genetically gifted with certain traits and talents that, in conjunction with hard work, allow them to develop and perform at the level necessary to compete professionally. I believe I am gifted with the necessary genetics and drive to accomplish great things in this sport, and I didn't want to regret never having taken advantage of those gifts.

My inspiration comes from two primary sources. First, I want to simply prove something to myself, that I can set a goal and persevere regardless of the many obstacles that arise. Second, I want to teach my older children who are capable of understanding what I'm doing a valuable lesson. You can achieve anything you want in your life if you set a goal and put everything you have into realizing that dream. There are many reasons why I shouldn't have been able to accomplish this, but that made the achievement that much more meaningful and remarkable. I believe that everyone will have their "day," but if you quit, no day can ever be your day.

I plan to add some additional lean size in order to be competitive professionally in 2015. My new goal would be to accrue enough points to compete on the largest stage in the sport, the Olympia.

Don't allow yourself to take unnecessary/unplanned days off. Even if you don't feel 100 percent, just get to the gym and do what you can. It's always better than not doing anything at all. 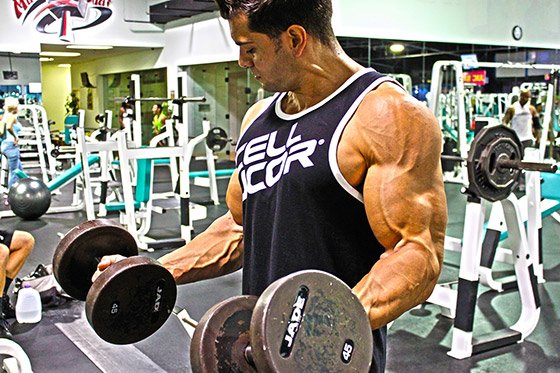 Franco Columbu. I'm amazed by the amount of muscle he was able to pack into his small frame. He had great symmetry and was very aesthetic. The goals he set for his physique were ahead of his time in the era he competed.

Bodybuilding.com has an incredible knowledgebase of supplement information. The many knowledgeable forum members provide excellent reviews and opinions regarding supplements, and many have a deep understanding of how and when they should be used. I felt like I was sharing my journey through the forums and BodySpace updates, and the feedback I received on a regular basis was very motivational. Most importantly, the information I was able to consume on the site ultimately led me to find the perfect single provider for my supplement stack, Cellucor.

DJ Snake and Lil John
"Turn Down For What"

Survivor
"Eye of the Tiger"

I started prep for my first show on May 1, 2014. I competed in four shows in three months with a total prep time of four months, ultimately earning my Pro Card at the 2014 IFBB North American Championships. I was told by several judges during post-show feedback sessions that I was "too much" and "too big" for local-level shows, and that my physique was better suited for National-level competitions. They were right!

Dave Melnicoff with Fit and Psyched Bodybuilding in West Palm Beach, Florida, orchestrated every aspect of my contest prep, including diet, training, and posing instruction. His attention to detail and desire to achieve perfection in every aspect of presentation played an instrumental role in my accomplishment.

Cory Magrys, Cellucor Digital Brand and Outreach Manager, responded to an early inquiry I made during my search for a trusted and reputable supplement provider, and has been in my corner since day one, providing motivation and helping to publicize my achievements.

My wife Barbara Candales—we did this together—her support and help in all aspects of my prep allowed me to accomplish my dream despite my hectic schedule and obligations as husband and father of four.

Mike Sansevero of NorthAmericanBodies.com, Mike Hawley of FloridaFitnessPhotography.com and John Hansen of FloridaPhysique.com each provided excellent contest coverage and some of the photography used in this article.