Against all odds, Manuel survived a childhood of sickness and overcame years of weight problems as a result. See how fitness lifted him from the depths of despair!

I was in and out of the hospital for the first three years of my life. I was diagnosed with severe asthma and was destined to fight it for the rest of my life. Through many treatments, injections, breathing apparatuses, the emerging technology and advances of the 1970s medical profession, parental love, and the shear will to live, I survived. 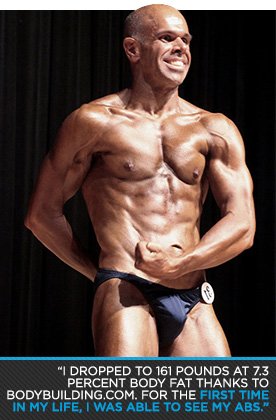 Asthma attacks were less persistent, but I was delivered detrimental news at age seven when I suffered a gastrointestinal emergency. After many tests, the pain passed, but I was told I had an oversized pancreas. Doctors advised my parents to watch my diet because I was destined to be overweight for the rest of my life. This led me to despair and I gave in to happiness through food.

Growing up, I was the chubby kid in class and my best friend was the big muscle dude. He inspired me to start lifting weights in high school. I saw progress. My muscles grew quick and fast, but I never trimmed out. After high school, I continued lifting, but without the proper knowledge, so I saw little gains.

I yo-yoed up and down in weight, but never fell below 200 pounds. In 2008, my wife and I relocated to Florida. I wanted to make a change and was tired of feeling sick and tired. I weighed 243 pounds and held 34 percent body fat. I decided to make changes and started jogging. I couldn't go more than a half mile, but kept at it and ran three times per week. I was erroneously living under the mantra "I exercise so I can eat."

In an effort to meet new people and obtain support, we joined a local Biggest Loser competition. That's when reality hit; I weighed 234 pounds. I had been running for a year and saw no difference. The competition helped me buckle down and gave me the fuel and motivation to change how I ate. I incorporated weights into my exercise regimen and was declared the challenge winner three months later at 198 pounds. 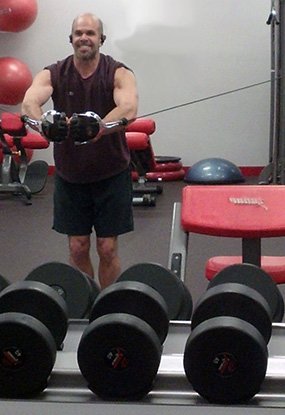 I found a new love for working out, but eventually lost motivation. I did my first organized 5k run on January 23, 2010. I completed the 5k in 30 minutes and 18 seconds and vomited a few feet from the finish line. Running gave me motivation and provided a way for me to find Zen with my new lifestyle.

I discovered Bodybuilding.com and came across the 100K Transformation Challenge. At that point, I maintained my weight between 198-195 pounds and joined the challenge on January 30, 2012. I sought a routine that could help me accomplish my goals and found Kris Gethin's 12-Week Daily Hardcore Trainer. Kris' videos provided the step-by-step instruction I needed to make a complete transformation. Three months later, on April 20, 2012, I posted my transformation photos. I dropped to 161 pounds at 7.3 percent body fat thanks to Bodybuilding.com. For the first time in my life, I was able to see my abs.

It's been more than a year since my transformation. Since then, I was selected as one of the winners of Infinite Labs I AM JUGGERNAUT challenge and as a result got to attend the 2013 Arnold Festival where I met many icons who I admire, including Kris Gethin. I competed in my first amateur bodybuilding show and placed third in the lightweight division.

I started lifting at age 16 to fit in and look cool with my friends. I continued to lift throughout college and on and off for 10 years after. Three years ago, I rekindled my passion for bodybuilding and committed.

Joining the 2012 100K Transformation Challenge motivated me to change the way I look and strive to be better. I made a complete lifestyle change and started following Kris Gethin and Jamie Eason. They changed the way I exercise and live my life.

I turned to the Bodybuilding.com Forum and BodySpace for inspiration. In April 2012, I was invited to participate in I AM JUGGERNAUT challenge from Infinite Labs. I didn't win, but I discovered a great group of people who share the same vision of health and fitness as I. I participated in the Arnold Festival challenge from August to November 2012 and won.

In 2012, I competed in the Ancient City Classic in the lightweight division. I placed third and received great feedback from the judges. They said I was too lean and needed to increase my muscle mass. I took that to heart and am currently working on it. My plan is to compete in the fall of 2013 in the NPC Middleweight class.

Life is way too short to spend another day at war with yourself. Most people have a constant struggle to get started, continue, or go back to a life of fitness and well-being. The moment they free themselves of their mind, they can open up to what their body knows it can achieve. If you want to do something, you'll find a way. Always find time for you because you only get one life. 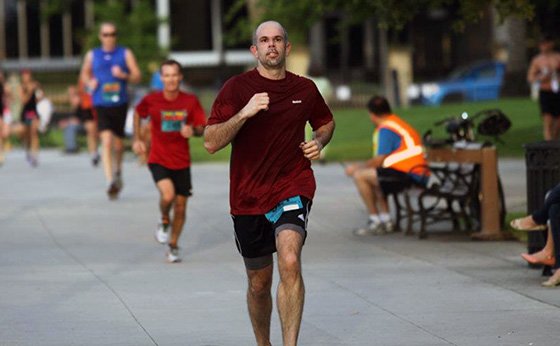 Larry Scott. When I first started lifting 20 years ago, I came across his picture. He had massive arms and forearms complemented with a well-rounded physique which I dreamed of having.

Without Bodybuilding.com, I would not be where I am today. It gave me free access to videos, articles, training tips, and the members of its community. Bodybuilding.com has the best prices for supplements and deliver in no time!