Amateur Bodybuilder Of The Week: Scott Is Encased In Muscle!

Scott chose bodybuilding over athletics to solely control the outcome of his success. See how his decision impacted more than his body!

I became interested in lifting during my sophomore year of high school. I was enrolled in a small Nebraska school that had a bullying problem. After I received a good beating, I decided to get in shape.

I was mentored by gym owner, Kevin Poppe, and fellow student, Mitch McCloskey. They taught me lots and I started focusing my efforts to become bigger and stronger. In a year, I went from 110 to 150 pounds. I also moved to a different state and became interested in powerlifting. I quickly became obsessed with building a stronger bench, squat, and deadlift. After competing in a few USAPL competitions and earning state records in the squat and deadlift, I set powerlifting aside to continue my bodybuilding journey. 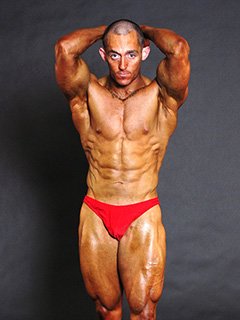 I spent the next few years doing bulk and cut diets. At one point, I became an unhealthy 250 pounds and added a significant amount of fat. I became an ISSA certified personal trainer, worked for a few local gyms for six years, and opened my own training studio.

I kept telling myself to compete but didn't because of my insecurity and uncertainty that I'd be too small, undefined, and wouldn't look the part.

In 2013, I hired a local prep team, 316fit, to help me compete. I started my diet in March at 197 pounds and competed at 165 pounds a few months later. I placed first in my weight division and second overall at the NPC Heartland Classic in Oklahoma City, Oklahoma. 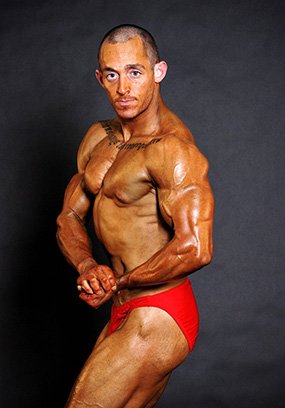 "Bodybuilding is appealing because you are never done and can always improve."

I'm not a fan of team sports and am not exceptionally athletic. I love that bodybuilding is an individual sport. Bodybuilding is appealing because you're never done and can always improve.

My biggest motivator is to think of the people who told me I'd never get anywhere lifting. When I first started exercising, I told a few people what I wanted to accomplish and they said it would never happen. I wanted to prove them wrong and show that I have tenacity and willpower to stick through trials and tribulations. Now that I've competed, I want to continually improve and show people that I'm unstoppable with a set a goal in mind.

On days when I felt dejected and exhausted from the lack of carbohydrates and nutrients, I watched bodybuilding DVDs for motivation. There are lots of videos on YouTube that I have on queue if I need a boost. I like to follow other lifters on the Bodybuilding.com forums for inspiration and motivation. I look back at my pictures from the beginning for motivation to keep pushing ahead. 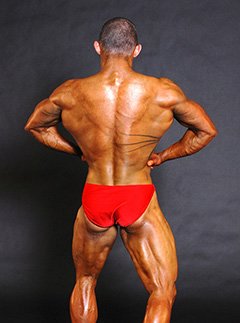 "I want to continually improve and show people that I'm unstoppable with a goal in mind."

My plans for the future are to take time off and build muscle before competing. I learned lots during competition preparation. Having a prep team look at my nutrition and tailor it to me was huge. After a hiatus, I plan to compete in a bigger show and see where it goes from there. I would enjoy my love for bodybuilding to eventually help me develop a fitness-based career.

Start with the basics. Compound movements build the most muscle in the shortest period of time. I don't believe there's a need for anything crazy or confusing.

My favorite bodybuilder is Dusty Hanshaw. I've followed Dusty for years and watched his career flourish into a full-blown enterprise. He makes staggering improvements and I cannot wait to see him earn a pro card. It's been amazing to watch someone start from the bottom and grind to the top. That type of tenacity is what a bodybuilder needs to get to the top.

I utilized Bodybuilding.com when I became interested in the sport and haven't stopped. The forums are the most resourceful place I found because of the interaction between like-minded individuals. The training videos on Bodybuilding.com are fantastic.