Kyle is so close to the pros he can taste it. The 28-year-old believes he has what it takes to compete against the best in men's physique. After one more show, he might get a chance to prove it!

I started five years ago with a goal to be fit. I didn't want to be skinny anymore. At the time, I had no desire to compete because I knew I was far from being a bodybuilder, but I always had a goal to step onstage. I heard about men's physique in 2011 and decided to hire a local contest prep coach to get started. 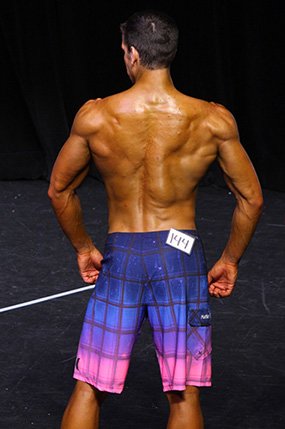 I was always interested in bodybuilding. When men's physique started, I knew I could compete. I live for this sport and the prep. It takes serious dedication and commitment. The desire to succeed each time I step onstage developed my passion.

It came from myself in the beginning. I believed I was able to take it to a high level and took the initial step. Since then, each show motivates me more and more.

At the start of my competition journey, I sought advice from the pioneers of men's physique like Alex Carneiro, Steve Cook, and Bobby Ashhurst. They gave me great advice. I also followed Mark Anthony and Colin Humphrey posing videos on YouTube. As a part of the division from the beginning, I made great friends who I go to for inspiration.

My goal is to earn an IFBB pro card in men's physique. I'm currently bulking cleanly and ready to cut for the Emerald Cup in Seattle, Washington, May 4. From there, I will travel to South Carolina for Jr. USAs to hopefully win my pro card. If I win, I intend to compete at a few pro shows and qualify for men's physique at the Olympia. If I don't earn my card there, I will head to Chicago for Jr. Nationals and hit most if not all of national shows until I earn it.

Study and research posing to get yourself started. Get motivated, stay dedicated and expand your knowledge. When it comes down to it, it's all a choice. Make a plan and stick to it. 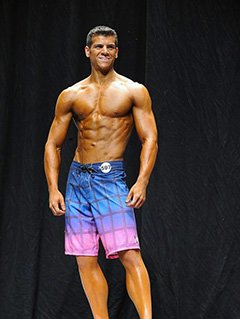 I have to go with Phil Heath and Kai Greene. They bring unbelievable packages to the stage. Old school guys like Arnold and Frank Zane are great. Steve Reeves has an awesome physique too.

For men's physique, Steve Cook has an awesome look. Mark Anthony is another guy I look up too and had the pleasure of meeting.

My coaches, Roger and Ally Baker, have amazing physiques. Watch for them to turn pro soon.

I joined BodySpace in 2007 to track my goals and progress. Steve Poynter was a big help in the beginning. I followed Kris Gethin's 12-Week Hardcore Trainer and was featured as a transformation and in the intro video.

I was also chosen as a Top 20 finalist for the 2013 BodySpace Spokesmodel Search.

Thank You: I want to give a huge thanks to my coaches, Roger and Ally Baker of RAB Fitness. Without them, I would have never reached my goals. They provide my nutrition plans and guide me through contest prep.

I also want to thank the many physique pros who gave me advice on posing.