Amateur Bodybuilder Of The Week: Daniel Trains Like A Pro

Daniel always had a muscular build, but when he started training with an IFBB pro, his results improves greatly!

I struggled with a body image disorder throughout much of my younger years. I seemed to hold myself in low regard, despite being lean and athletic. I was involved in mostly every sport, and eventually concentrated on basketball.

My self-esteem and awareness of my body often left me in low morale. I began searching for something athletic to become involved in at the conclusion of my high school basketball career. I wanted something I could benefit from physically, something I could become as passionate about as I was with basketball.

I began training regularly in 2008 at the beginning of my college career. I often trained seven times per week, trying to transform myself to be more muscular and fit. As I began to gain size over the years, my body began to come into its own and I developed a pleasing physique. Many people began encouraging me to step on stage and compete in bodybuilding. I had never given much thought to it before. 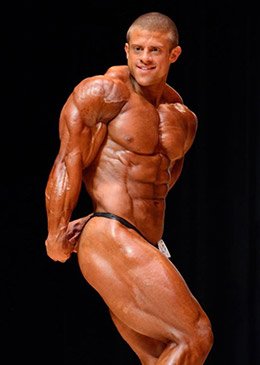 "Marc and his training group were able to recreate my physique and I was able to make monumental strides in developing my body."

I entered into the 2012 WBFF Fitness Atlantic, and won my weight class! Although that was a good way to get my feet wet in the industry, I sought something more. I began giving thought to competing in the NPC. I tried my hand at the 2013 Jay Cutler Classic, did my entire prep myself, and did many things wrong. I placed third in my weight class and got positive feedback from fans and other competitors. I needed someone on my side to show me how to do things properly if I wanted to have a serious impact in the industry.

I got in contact with NPC bodybuilding competitor Marc Antoine-Andrade, my current coach and training partner. Marc welcomed me into his training group with IFBB Pro Evan Centopani. They were able to recreate my physique and I was able to make monumental strides in developing my body.

Marc guided me into the 2014 Jay Cutler Classic where I won first place in the Super Heavyweight class! Recently I competed in the Connecticut Grand Prix and placed first overall and then I placed first for super heavyweights at the Atlantic States contest in June. 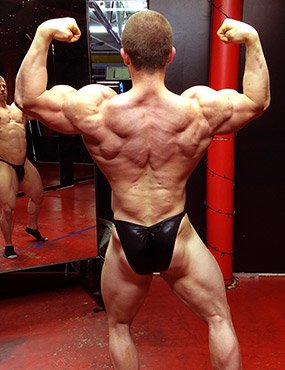 "The feeling I get when I hear I am someone's 'motivation' is something I cannot describe. It makes me want to work harder for these people."

Training with Marc and Evan is motivation enough every day to want to get better, achieve more and improve yourself. Both show such passion and dedication to the sport, that it easily spills onto me and increases my passion daily.

It is all addicting: being on stage, the support from the fans, and words from other competitors. The feeling I get when I hear I am someone's "motivation" or their "inspiration" is something I cannot describe. It only makes me want to work harder for these people, so they feed off my energy and continue to improve themselves. The feeling on stage is unparalleled; the lights, the cheers are intoxicating. Nothing else I have experienced in my life compares to it.

My father was a well-built individual and one of the biggest role models, coaches, and friends in my life. I aspired to be like him in every way possible. Knowing he was in great shape throughout his younger years made me more attracted to the idea of being a bodybuilder, getting in shape, and eventually competing. He supports me unconditionally, goes to all of my shows, and appreciates the hard work and dedication I put forth more so than anyone else.

I train at Montanari Brother's Powerhouse Gym in New Haven, Conn. It is one of the most inspirational places I have ever been to. Pictures of bodybuilders, physique, bikini, and figure competitors decorate the walls. The people there love the sport and show support to anyone chasing their dream. Being there is inspiration to continue working as hard as possible to achieve your dreams and crush all goals set forth before you. I competed again at the 2014 CT State Championships/CT Grand Prix June 14th, where I placed first overall, and the 2014 Atlantic States on June 21st, where I took the super heavyweights title! 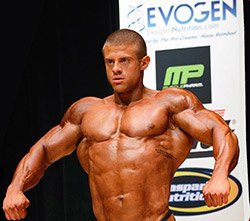 I plan to take a year off for a much needed offseason to make some serious gains and improvements in my body, and eventually try my hand at the national stage next year at Jr. USAs or Jr. Nationals.

The most important thing I could instill in anyone is to give 100 percent effort, all the time. I am aware of the struggles, the hardships, and the low times. Always remember there is light at the end of the tunnel, never give up hope and always push on!

Evan Centopani is my favorite, not only because I am able to train with him daily, but he is one of the most well-spoken and hardworking individuals in the sport.

Bodybuilding.com is one of my most dependable sources for any tanning products I use for my shows, as well as the only source I go to for my BCAA products. The lowest prices offered are a benefit to a bodybuilder's lifestyle, which can be costly at times.

Tiesto
"Out of Control"