Amateur Bodybuilder Of The Week: Brian Has A Powerhouse Physique!

Brian admires Steve Cook and harnesses motivation from fitness sources to lift bigger and better. See why Brian plans to compete with a sense of urgency going into 2014!

I've enjoyed working out since the end of college when I looked for activities in my spare time outside of school and work. I loved working out at the time but never paid much attention to my diet. I love cooking and trying new foods, so it was difficult to focus on.

I moved to a new city for work in 2013, traveled back and forth between two cities in preparation for the move, and completely slacked on my nutrition. I allowed my move to be an excuse to eat whatever I wanted. With summer around the corner, some friends were doing a bodybuilding and physique competition and motivated me to work with a trainer to get in shape. I began training and dieting on April 1, 2013, to get in the best shape of my life by summer.

I did cardio every morning at 5:30 a.m. before work and got amazing energy from it. I went without alcohol for 60 days and put my full effort into training and dieting. When Memorial Day rolled around, I made big progress and lost 10 pounds. AS of July 4, 2013, I had lost 18 pounds. I was in the best shape of my life but knew I could accomplish more. 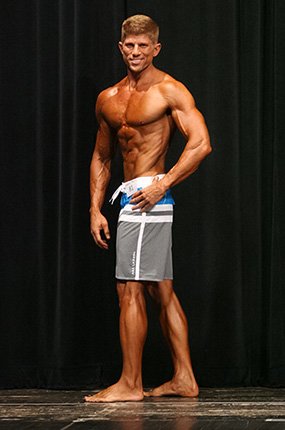 I started to discuss competing in a physique competition with a trainer and found a show near my previous home in Indianapolis at the beginning of September that was perfect. We created a training and diet plan for 12 weeks and it proved to be some of the most difficult and stressful times I ever went through.

During the 12 weeks, I was busy with several work projects and presentations that seemed to test my patience and I carb cycled every few days. There were several days that I was more productive working from home because I could focus. When peak week arrived, I felt like I succeeded no matter how I fared in the competition. I was nervous during the show but knew that I exceeded my goals. I weighed 152.3 pounds the day of the show, down from my original weight of 181.4 pounds in April. There were eight competitors in my class at the NPC Natural Circle City Classic in Beach Grove, Indiana. I placed second and was proud of my accomplishment.

A week later, I noticed the largest Midwest NPC competition was at the beginning of October. Even though I was traveling in September, I kept dieting to compete and experience a larger show. It was a new challenge to eat six meals per day and find a gym in different cities, but I did.

I competed in the NPC Natural Northern 2013 outside Cleveland, Ohio, October 5, 2013. I weighed 153.2 pounds with 4.7 percent body fat and placed 8 out of 16. I was discouraged to not place in the top five but understood that it was my second competition. I'm looking to compete again in 2014 and will spend the rest of 2013 to work on my weak areas. 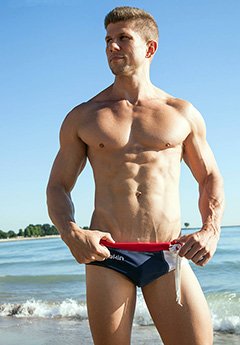 "I followed pros online to see their progress and training. They kept me motivated and pushed me to work harder."

I've always loved new challenges and opportunities to push myself. When I built confidence to train and diet, the passion and dedication grew. My first competition was a self-goal, so I didn't care who else was competing.

My friends from Indianapolis inspired me to lift. I saw them compete in April and was motivated by watching their hard work pay off. My friends in Chicago provided great encouragement on my progress and gave me confidence to go six months on a hardcore diet and training plan. I constantly searched the Internet to learn about competitors and posing.

I tried to stay motivated, but it was tough at times. I followed pros on Twitter and Instagram to see their progress and training. They kept me motivated and pushed me to work harder.

I took the rest of 2013 to build more muscle on my weak areas. I plan to compete in early 2014 and place in the top five at a NPC national qualifying show. It's a big goal since I've only been competing for a year, but I think it will provide the push I need to keep going. 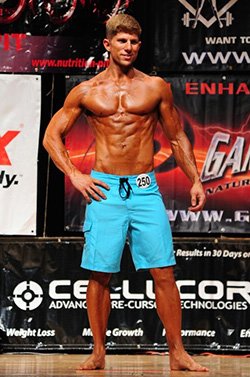 Set goals and stay motivated to reach them. Even if you keep the goal private, have something to work toward and keep going. Who is your favorite bodybuilder?

Growing up, I thought Arnold Schwarzenegger was a great inspiration. I got the chance to see him several years ago at the Arnold Classic in Columbus, Ohio, and it was a cool moment seeing the crowd he drew. His focus on fitness has been a great inspiration.

Now I look up to Steve Cook. Following his training and progress through social media has been a motivating tool. I use his training tools in my workouts.

I downloaded the Bodybuilding.com App the day I started training in April 2013. I checked out new workouts for muscle groups through the app and have it with me at the gym. I routinely order supplements and other items that are useful. I communicate with several people through BodySpace and manage my progress. People reached out and sent positive messages about my progress which inspired me to keep training hard.