Allanna Got Fit To Inspire Her Troops

Air Force officer Allanna Jones-Anstaett always struggled with her weight. Then she realized that, in order to be a role model, she needed to get fit for life! 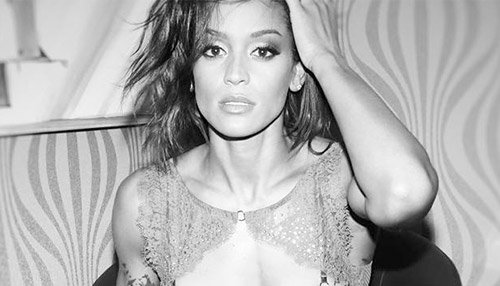 Growing up, Allanna Jones-Anstaett was extremely active, almost to a fault. "I played softball and soccer and was out all the time," she says. "Those activities, combined with band and homework, led to many late nights where, instead of cooking dinner, my family and I would just go grab something quick."

Lacking a foundation of healthy habits, Allanna's diet continued to suffer when she eventually attended the Air Force Academy. "We didn't have any choice but to eat whatever they were serving," she recalls. "The meals weren't always the healthiest. Every Monday was pasta night, and there was dessert every day."

Allanna struggled to fit workouts into her busy schedule, especially after she graduated and faced the busy schedule of an Air Force officer. But the demands of her job soon reminded Allanna that she needed to be the best she could be—which meant getting healthy and fit. That's when things changed.

What was your turning point or aha moment?

I was close to 200 pounds when I realized that I wasn't being a good role model for my troops. All through college, I had it drilled into me that, as an officer, if you didn't get an "excellent" score on the physical fitness test—90 points or higher—then you were setting a low standard for the enlisted troops.

I really couldn't expect my troops to be physically fit and pass their fitness tests. I knew I wasn't in good enough shape to place where I wanted and that I needed to be a better role model.

What was your goal once you decided to get fit?

Fitness competitions had just started getting really popular in the area I lived in. I had friends who were competing, and I followed their progress online. Eventually I thought, "Why not me?" 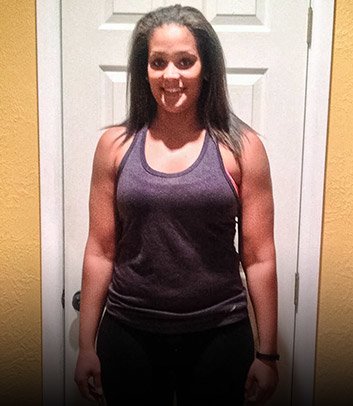 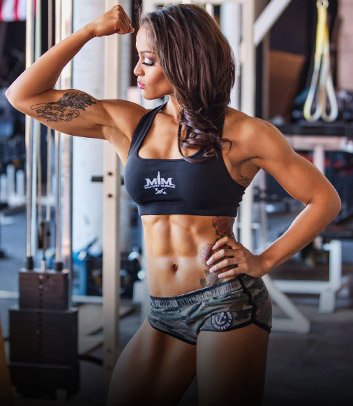 My Air Force base had a competitive fitness team, and the trainer who coached them encouraged me to try out. I made the decision to give competing a shot, and I gave myself five months to lose 50 pounds. I was beyond nervous. I'd never been one to show my body off, because I was overweight. Still, I stayed determined.

Throughout the five months I had to prepare, not competing never really crossed my mind. I have always been a goal-driven person, and once I set my mind to something, I go for it full force. It was an ambitious goal, but in the end, I pulled it off.

What was the first thing you changed about your lifestyle?

My diet. I didn't have a cheat meal for the five months before my competition. I cut out all added sugars. I realized that I'm good at taking regular recipes and cleaning them by reducing added sugar and replacing butter and oils with things like applesauce and avocados. So I started doing that, using Bodybuilding.com as my go-to resource. 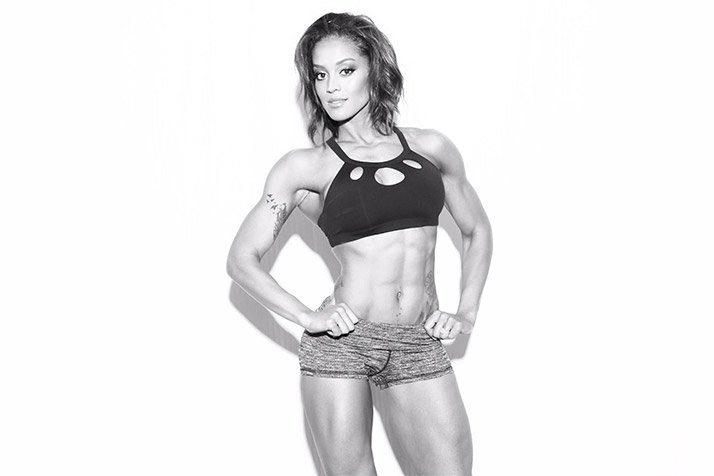 I have always been a goal-driven person, and once I set my mind to something, I go for it full force.

I used the site to research healthy recipe substitutions, like using avocado instead of butter. I tried different diet plans on the site to find out what worked best for someone with my body type.

How did you discover Bodybuilding.com?

I actually discovered the site before I decided to compete. Someone had posted something about it on Facebook, so even before I was working out consistently, I would go on there and look at training programs. I love all the different articles about workouts or recipes. I love to cook, so I spend a lot of time looking at recipes to add into my meal plan.

In five months without a cheat meal, how did you stay motivated and curb cravings?

I'm a chocolate-chip-cookie-dough-ice-cream fanatic. I actually found a lot of recipes on Bodybuilding.com to help me fight cravings. For example, when I was craving chocolate, I'd make a batch of protein avocado brownies instead of having ice cream.

Did you start working out right away?

Since I had so little time to prepare for my competition, I started doing two-a-days right away. I would get up and do an hour of cardio, and then at night, after work, I would go lift.

What was the most difficult thing about your new lifestyle?

The hardest part for me was definitely trying to balance training with work and still have time to plan and prep my meals. I had never gone through that planning process before, so I struggled with that.

How did you stay motivated to balance it all?

I think that, over time, I just got used to it. I forced myself in the beginning, especially when it came to getting up at 4 a.m. for cardio before work. Eventually, it all became a habit. I also had to learn to adjust my routine when things got in the way, like if work got busy and I couldn't get in a workout. There's only so much time in the day, so there wasn't much I could do about it other than make sure I upped my cardio the next day to compensate for the workout I had missed. 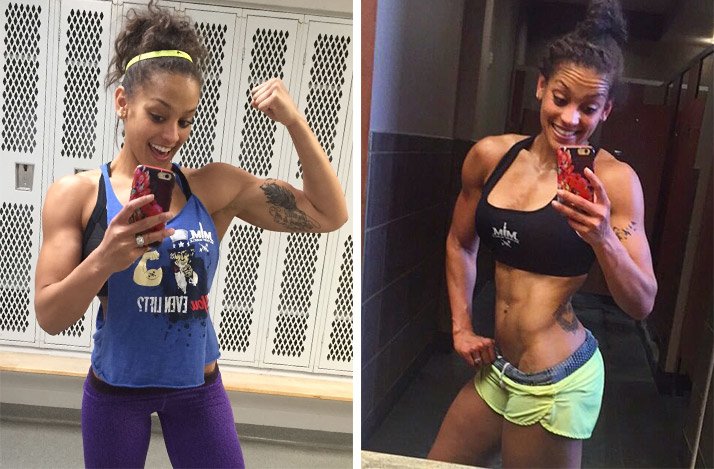 My husband was very supportive throughout the whole process. The fit lifestyle was new to both of us, and I kind of forced him to go along with it with me. He stuck to the same meal plan as me. He's definitely gotten more fit, even though he sometimes has cheat meals without me. We ended up moving away from the base where my trainer was, so now my husband has become my workout partner, too.

How did you design your workouts?

I usually go with one muscle group each day. I draw a lot of inspiration from Bodybuilding.com. I love trying workouts from the site and then tweaking them for my specific goals.

Did you encounter any hurdles or setbacks?

It was hard to stick to my meal plan at first because I was embarrassed to take food into meetings at work. I just wasn't used to eating five or six meals a day, and a lot of my coworkers weren't familiar with the regimented routine of someone who's preparing for a competition.

I felt like I was constantly being judged, but over time, I stopped caring. I realized that, at the end of the day, other people might be judging me, but I need to live a life that's going to make me happy.

As I was waiting offstage, I literally thought I would have a heart attack. But the second they said my name, there was no turning back. I felt as if I was shaking like a leaf the entire time, but my husband said I didn't even look nervous.

In my first competition, I was in the model, bikini, and figure categories and went on stage at total of seven times. Each time, I could feel more of the nervousness wash away. I ended up placing second in bikini and third in the figure and model divisions.

What do you love about competing?

I like meeting other fitness competitors who have the same mindset that I do. They understand how much work and dedication the sport takes. Competitions are full of supportive, like-minded people, and I meet new ones at every competition. 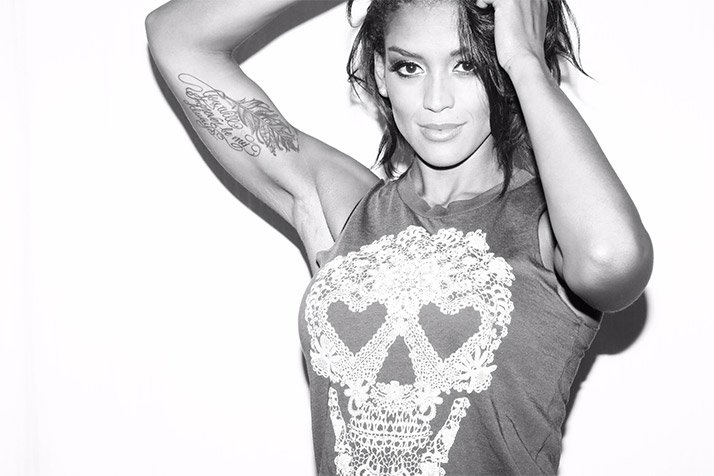 My transformation has affected my family and friends by making them want to change their lifestyle, as well.

I also fell in love with the feeling of competing—how it makes me feel to be onstage, knowing I've achieved a huge goal. That's what kept me going. I got addicted after my first show, and, I decided I wanted to get my pro card. I got that in May of this year—exactly a year after my first time on stage.

What are your plans for the future?

I plan on competing in my second pro show, Fitness Universe, in June 2016. I just found out this week that I'll be working with Paul Buceta, the owner of Strong magazine, to run a Strong Camp in Ohio in July. I'd entered in their trainer ambassador search, and they chose me to run a weekend training camp, kind of like a yoga retreat, but for fitness.

I'll plan workouts, seminars, and group activities. It's designed to get a bunch of women together to discuss having a healthy lifestyle and being strong. It had been a longtime goal of mine to run one of these camps, so I'm really excited.

Another one I'm doing is back at my old base. My former trainer asked me to run a training camp and a nutrition seminar for everyone, so I'll be doing that at the end of February.

Has your fitness affected any other areas of your life?

My transformation has affected my family and friends by making them want to change their lifestyle, as well. Recently, my parents decided that they wanted to clean up their diets, so they asked me to come up with a meal plan, and they started at the beginning of 2016. I'm pretty excited about that!

Selena Gomez
"Good for You"

Selena Gomez
"Good for You"