What Is The All-American Sport?

What is the All-American sport? Our forum members come together to share their opinion about how they believe football is now the All American Sport. Read on for more ...

TOPIC: What Is The All-American Sport?

It's always been said that baseball is America's pastime, but does it still remain the No. 1 All-American sport? More and more players from other countries are being brought into the game. Such a large percentage of basketball players have a criminal record. Soccer remains probably the biggest international sport. The majority of hockey players are not American. So what is the American sport?

What is the all-American sport? Why?

Do you seen any future changes in sports making them "more American" or "less American"?

By far, the new all-American sport is football. Not only is football the sport in the United States that's comprised of mainly U.S. players, but unlike essentially all other sports played here, football is the only sport that a team of United States all-stars could travel anywhere and win, with barely any competition whatsoever. 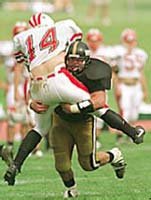 In fact, in all other countries throughout the world, if you ask if anyone wants to play football, you'll end up playing soccer- that's how little of a presence football has.

Also, out of all the championships of all the leagues, the Super Bowl is undoubtedly the biggest event. At least 100 million people will end up watching the game; no other sport has this kind of presence. Almost all athletes watch the game, most men watch, wives and grandmothers will watch and gab about the commercials, children enjoy the game and commercials, and toddlers will watch because they'll have nothing else to do - the Super Bowl becomes a family affair.

Also, I've been to both football and baseball games and the atmospheres are worlds apart. Sure baseball fans yell and cheer but football fans go totally nuts - they're at the game with hats and masks, bodies painted one color, faces painted the other, it's crazy. In the land of American sports, football reigns supreme. 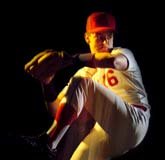 Baseball is clearly still popular but has become more widespread in the world compared to football. While this spread has, and still is, occurring, football has continued gaining prominence in the United States. In magazines and at schools there are now "touch football" organizations and competitions to help encourage kids to exercise and stay active.

In the future football will slowly take the path that baseball has taken and become played more widely throughout the world. There are already football organizations in Europe and Japan and they will start to spring up in other places as interest grows and equipment can be provided to those who want to play in poorer countries.

In particular, interest will shoot up when games start to be played between different countries on different continents (not just one part of Europe vs. another). As for sports becoming "more American?" I think lacrosse holds potential. As football slowly follows the path baseball has taken, lacrosse will assume the position football is in now.

As of now, lacrosse is mainly played in America and is only prominent in certain regions. Unlike other major sports, many people will have trouble telling you basic rules of lacrosse. With this said, lacrosse is certainly one of the nation's fastest growing sports, which in years to come, well may become America's new pastime.

Gallup poles have shown year after year that football is the favorite sport of a majority of Americans. In addition, it has a viewership that exceeds that of any other sport in the country.

The Super Bowl is even regarded as an unofficial national holiday by many Americans. It is a sport that is popular at the high school, college and national level. Although it is, like baseball, played in many countries around the world, the sport has never been very popular outside of the U.S.

Click Image To Enlarge.
The Favorite Sport Of A Majority Of Americans.

Baseball has long been considered the "National pastime" by many Americans. However, the sport has increasingly become more widespread around the world over the years. Japan, Australia, Taiwan and many countries in Latin America have made baseball a major sport that rivals the global sport of soccer.

Baseball even became a medal sport of the Olympics in 1992. Cuba has been the gold medal winner in three out of four of those Olympics with the United States winning the gold only once in 2000. With the popularity of the World Baseball Classic and the Little League World Series, baseball has been garnering worldwide exposure and a greater following throughout many nations of the world.

Even basketball is becoming a more global sport with many professional players coming from all over the world to play at the college and professional level. The internet and the broadcasting of games to all regions of the earth will likely enable this trend of globalizing American sports to continue unabated.

Football, the only all-American sport that has not been embraced around the world, will likely not become "less American" and the evidence seems to bear this out. NFL Europe, while initially having a small measure of success in some European countries, now has a very small following that appears to be declining year by year.

In places where football once actually did experience significant popularity, such as the Netherlands, it has waned considerably. All of the evidence points to football as the only sport that we can refer to as truly all-American.