You work hard to keep on top of your nutrition game, but sometimes you need that extra edge to get the most nutritional gains out of everyday foods.

If you take your health seriously—and you must since you're reading this—then you likely already know which foods to eat and which to avoid (hint: any processed foods). Even though you're armed with this knowledge, you might still be shortchanging yourself on some real health benefits hidden in the foods you eat.

To unlock the complete nutritional potential of your food, remember that vegetables, fruits, and the other whole foods we eat are also living organisms. As such, they have their own self-defense biomechanisms to protect them from predators—like us. Fortunately, it just so happens that the byproduct of these biological machineries—things like trace elements, carotenoids, polyphenols, flavonoids, and phytochemicals—can protect us from health problems, too.

It's time to think about maximizing the full nutritional potential of these same foods. While you think you've got something as simple as a potato all figured out, some lessons about spuds and these other staple foods may still surprise you.

There's no doubt the added garlic adds an incomparable depth of flavor, as well as tremendous health benefits. But many people shoot themselves in the foot by preparing it the wrong way. If you chop garlic and immediately toss it into a heated pan, stop now! 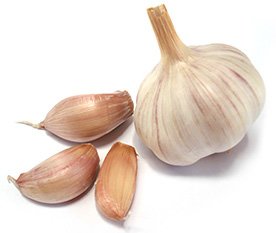 Once you chop the garlic, keep it away from heat and let it sit for 8-10 minutes before you cook with it.

Garlic contains a protein element called alliin and a heat-sensitive enzyme called alliinase. Only when you slice or puncture garlic's thin membrane do alliin and alliinase synthesize into the antimicrobial and cancer-fighting compound allicin, which may have the ability to fight cancer and heart-related conditions.

Garlic sounds amazing so far, but here's the rub: A group of clever food chemists pointed out that applying heat immediately after cutting garlic destroys the alliinase—that same enzyme required for forming the most valuable component of garlic. By that point, a majority of its healing properties go up in flames.

The good news is that you can still cook garlic and reap its rewards—and tastiness—simply by letting the cut-up garlic rest a bit. That's it. Once you chop the garlic, keep it away from heat and let it sit for 8-10 minutes before you cook with it. This brief waiting period allows the allicin to fully come together. It'll stay intact even through later cooking.

Alternatively, you could eat your garlic raw—but then you'd be repelling more than just vampires. Your mate, friends, and coworkers might steer clear, too.

Hack No. 2: Eat the skin of organic produce

The skin is its biggest nutritional asset of many fruits and vegetables. Far too often, people discard the top layer, thinking it's dirty and gross, but they end up throwing away many helpful nutrients in the process. 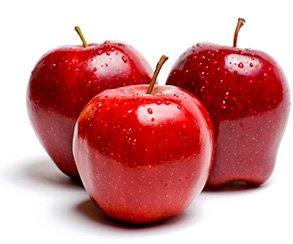 The solution to getting around excess amounts of pesticides and still being able to enjoy produce in its entirety is to buy organic versions.

The outer layer functions as a defense against hazardous elements like mold, grazing predators, insects, fungi, and ultraviolet rays. This protective effect builds a higher concentration of nutrients—like antioxidants—within the skin and the tissue below it.

Think of how your calluses form in response to repeated chafing. By eating the produce skins, you take in all the nutrients a vegetable or fruit has to offer.

"But, won't I ingest a bunch of pesticides?" you ask. Current agricultural practices make this a legit concern, but it just means you have to be extra careful.

Despite your rigorous scrubbing and washing, nasty chemicals can still penetrate deep into the produce's inner tissue and then enter your body.

The solution to getting around excess amounts of pesticides and still being able to enjoy produce in its entirety is to buy organic versions of produce listed under the "dirty dozen," which tend to be the most contaminated.

Hack No. 3: Chill potatoes to lower their glycemic index

The fast-digesting starches in a typical modern-day spud actually spike your blood sugar about as high and as quickly as eating sugar with a spoon. This is especially true of the standard supermarket varietals like the white-fleshed Russet or Idaho potato.

Although our bodies are designed to manage the rapid rise of blood glucose from high glycemic foods with a hormone called insulin, consuming copious amounts of sugary foods on a regular basis can lead to a condition called insulin resistance.

At that point, blood glucose can no longer be properly controlled without meds. The unfolding of this process can lead to type 2 diabetes, which can lead to heart problems, kidney failure, and amputations if left untreated.

What is a tater-loving person to do? 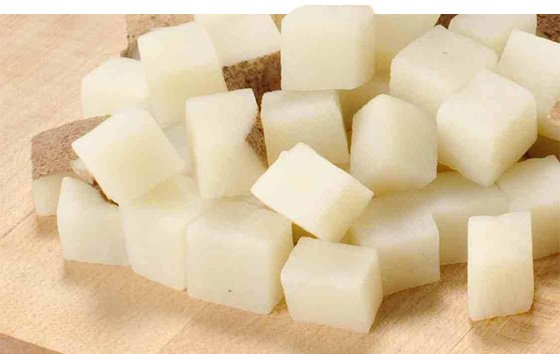 Simply cook the potato and then chill it in the refrigerator for approximately 24 hours.

Simply cook the potato and then chill it in the refrigerator for approximately 24 hours. The cooler temperature lowers the glycemic index of the starches, which makes for 25 percent or so reduction in the resulting rise in blood glucose. Your pancreas will thank you, since it's responsible for releasing that ever-so-important-glucose-corralling insulin. Excess demands placed on the pancreas by repeated glucose spikes are thought to damage the organ over time.

From that point on, the chilled tater will keep its low glycemic rating for you to enjoy, free from worry. You could also slow down starch digestion by adding dietary fats to your potato (and really any other starch). So ignore those judgmental head shakes; a pat of grass-fed butter or even some bacon bits won't necessarily turn that baked potato into a nutritional trainwreck.

Adding fats to otherwise low-calorie vegetables may sound counterintuitive, since in some cases the act of eating vegetables is a way to avoid consuming excess fats. But you're not doing yourself any favors by skipping out on them.

Dark leafy greens—kale, swiss chard, and spinach—as well carrots and tomatoes, which have beta carotene (the precursor to vitamin A) and lycopene, respectively, are chock full of fat-soluble vitamins like A, E, and K. They need to partner up with dietary fats in order for our digestive systems to adequately absorb and utilize them. Not including these fats is like bringing a hot date to the prom, but ditching him at the punch bowl for the rest of the night. 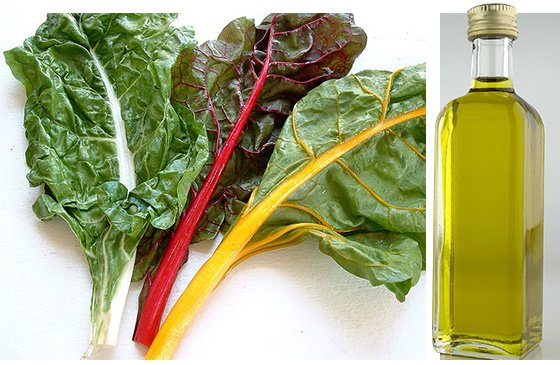 Dark leafy greens need to partner up with dietary fats in order for our digestive systems to adequately absorb and utilize them for our body's benefit.

This doesn't mean you should drown your vegetables in a vat of full-fat dressing or wads of butter to ensure nutritional benefits. A study in the "American Journal of Clinical Nutrition" concluded that a minimum of 6 grams is needed for optimal absorption. That's about the equivalent of a small handful of nuts or a couple of tablespoons of olive oil.

If you're already eating said vegetables with other fat sources like a 6-ounce steak, you're already well on your way to fat-soluble vitamin paradise. If you have any doubt, though, your best bet might be to toss in slices of avocado, a tasty, fatty superfood.

Hack No. 5: Don't boil your vegetables

Boiled vegetables remain a staple among people on low-fat and bodybuilder diets. Boiled chicken and vegetables, anyone? Certainly, it's fast, convenient, and easy to clean up. But have you ever wondered why the cooking water turns green after the broccoli floats around for a while? Perhaps even sadder is that the water gets promptly dumped out without so much as a shrug, leaving nothing but a fibrous clump of less-nutritious green matter that can barely be called broccoli. 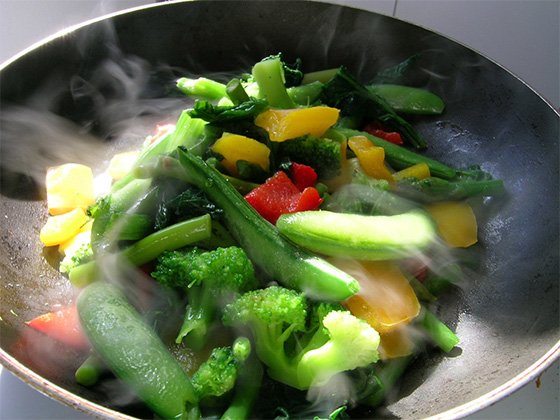 If you want to take advantage of eating vegetables in the first place, consider sauteeing your vegetables with some grass-fed butter, or even steaming them.

If you want to take advantage of eating vegetables in the first place, consider sauteeing your vegetables with some grass-fed butter, or even steaming them. That way you avoid losing nutrients to the water bath and increase the nutrient bioavailability from the added fats.

Hack No. 6: Eat carrots that are cooked, not when raw

For some, this can be a disappointing realization, since raw carrots are some of the most portable and convenient vegetables to snack on.

Surprisingly, cooking the carrot whole and then chopping it up works both as a nutritional and a flavor enhancement. Cooked carrots tend to taste more sweet, but more important, you retain approximately 25 percent more of a cancer-fighting compound called falcarinol, which protects the carrot from fungal diseases in nature.

Since carrots also contain beta carotene—the healthy stuff that makes them orange—you'll need to remember to eat them with some fats to absorb the nutrient.

Nuts of all kinds are packed with protein, omega-6 and omega-3 fatty acids, and trace minerals, and are a fantastically filling and convenient snack to boot. Unfortunately, nuts in their unaltered form also contain high amounts of "antinutrients," more specifically phytic acid, lectins, enzyme inhibitors, and in some cases, even mold.

Phytic acid and these antinutrients are not digestible in humans and wreak havoc in the body because they hungrily cling to minerals like calcium, iron, zinc, and others. Consuming a large quantity of these nuts without first putting them through a process called sprouting could lead to serious mineral deficiencies and bone density loss. 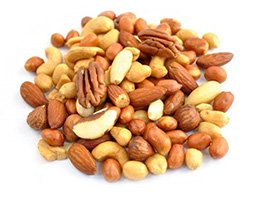 Sprouting a nut essentially involves soaking it in water (salt water, or sometimes an acidic solution works, too) for a preset length of time. The exposure to wetness mimics something that occurs in nature when the nut releases enzymes to break down the antinutrients. What this ultimately means is that properly sprouted nuts have increased nutritional value for your body and make them more digestible.

The soak time depends on the type and quantity, and can range from a few hours to a full day.

There's certainly no shortage of information on which foods enhance vitality, fight disease, and help to preserve quality of life. Yet I am willing to bet that you didn't know about one or more of the "nutritional hacks" I just mentioned. And there's no shame in that.

Centuries if not millennia of passed-down wisdom on how to cultivate, store, and prepare these foods set the foundation; it's up to you and me to help educate others on how they, too, can reap greater health benefits from their food.

Do you have any kitchen secret or nutritional hacks to share? Log in to BodySpace and join me in the comments below!