Ditch the treadmill and ready your body for action with these simple, adaptable drills. Some will be new, others you'll remember from your youth, and others you were glad to forget!

Does your idea of a warm-up find you on a stationary bike, cruising at a comfortable speed while catching up on the latest gossip in Us Weekly for exactly 10 minutes—no more or less—before heading off to the iron pit to start your ramping sets? Sure, that counts as a warm-up, but making some changes could lead to drastically improved performance in your training and your athletic arena of choice.

Some trainers would hit you with their epic prehab-rehab-mobility-stability routine, guaranteed to humiliate you and take up only 75 percent of your allotted workout time. Not me. We're going to keep things loose, because this is your general warm-up.

In case you don't know the term, a general warm-up is, well, general. It's just to get your body warm, limber, and ready to perform work. But when done properly, it can also make you stronger, more mobile, and more resilient to injury. Hell, it may even save your sanity.

I think of warm-ups as a chance to play before the serious work of training. Variety belongs here. Fun belongs here. Try replacing your current warm-up with one of the suggestions below, and you won't regret it.

I got this idea from Max Shank, a man so strong and limber, I often suspect that he has entered the dark world of medical tourism to have his DNA spliced with a tiger's. He's created a solid explanation video to give you a place to start, but his Instagram account is also loaded with sped-up versions to poach ideas from.

The idea is to set a timer for 5 minutes and just...move. Try not get too structured. Just seek out areas of restriction within the body and move through them, trying to expand your capabilities. You can perform joint circles, light calisthenics or stretching, whatever moves you liked best from a past yoga class—really, anything that feels good.

I'll often have a theme to my flows. For instance, I might concentrate on making circles with my joints, usually starting with shoulder circles. Do circles to the front and rear, fast and slow, then try finding new ways to perform the circles, like using bent elbows or from the bottom of a lunge or toe touch. You could follow this up with neck rotations and nods, again changing tempo or position to make them more effective.

The first time you do this, yes, it'll feel weird and awkward, but it gets easier with repetition. Over time, you'll learn to spot areas of your body that don't move as well and spend time getting to know all about them. This is a conversation that you have with your body, so don't try to bully anything into becoming more pliable. That will always come back to you as pain.

Get Down, Get Up

I work with a lot of elderly clients. Over time, years of sitting at desks and on couches and even sleeping on an elevated platform have left them unable to comfortably get on the ground or even tie their shoes. You can avoid this fate by purposefully interacting with the ground on a regular basis—no matter your age or strength level. Along the way, you'll also help ensure that the strength you're developing with your squat, deadlift, and lunge is applicable to the real world.

Wondering where to start? The great strength coach Dan John offers up a simple reintroduction to the ground that could be scaled for just about any level of ability.

Get back up Wrestling Techniques
Watch the video - 5:26

You can freestyle this as well. From a standing position, get down on the ground and lie down on your belly. Stand back up. Repeat on both sides as well as your back. That is one round. For the next round, add one challenge to the movement, such as placing one hand behind your back, interlacing both hands behind your head, "gluing" one hand to the opposite knee, keeping your legs crossed, or only using one leg.

For other fun variations, add light tumbling or calisthenics to the mix. Get down on your belly, perform a forward roll, and stand back up. Next, get down on your back and perform a backward roll before standing up. Perform 4-6 rounds, and you should be ready to start your workout.

This was a favorite of my wrestling coaches back when I was in school. In fact, it worked so well at raising my heart rate and loosening up my hips and back that I was happy to forget all about it when I left school. Over/unders were reintroduced to me when I was attending a workshop with Erwan LeCorr, the founder of MovNat, years later, and I've been a fan ever since.

Coaches like these because they're incredibly simple and can work with just about any equipment. Just set a bar or resistance band at midthigh height, or put that Smith Machine you like to make fun of to good use.

Then, well, just step over the bar, and return by stepping under it. When you're ready, start adding movements that you are comfortable with, such as jumping over the bar, crawling both over and under, or using the duck walk (remember that awful movement?) or wrestler shoots to return under the bar. No bar? Just use your workout partner.

Remember to change the direction you face periodically; moving forward, backward, and to the sides all have their own unique benefits. You can also just focus on going under in your own free-form limbo warm-up.

Limbo drills with a stick
Watch the video - 3:14

There are a lot of contradictory scientific and anecdotal reports on foam rolling these days. Some people claiming that SMR (the fancy acronym for "self-myofascial release" we trainers use to save time and sound smart) will increase range of motion. Others aren't so sure.

I'll let someone else argue about the benefits or lack thereof. I still use the foam roller for two reasons, and both of them are in the general warm-up. First: if I have you foam roll for 10 minutes, I guarantee you'll be warm and ready to move on. It's another way to interact with the ground and move through all kinds of positions you don't encounter in life, some more painful than others. 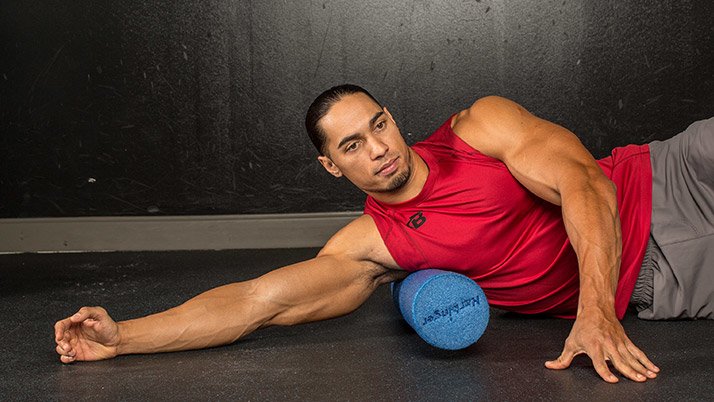 Rolling your triceps, lats, and upper back before overhead pressing might just help you feel that mind/muscle connection a little better.

Secondly, in my experience, I find that I have a better connection to a muscle after rolling it. For instance, rolling your triceps, lats, and upper back before overhead pressing might just help you feel that mind/muscle connection a little better—which is never a bad thing.

Remember how, before practice or gym class in middle school, the coach would have everybody line up and move from one end of the room to the other while kicking your butt, skipping, or somersaulting? It's still a good option for warm-ups.

Mix stretches with light skipping drills and animal walks, and you're good to go. Stretches can be standing on one leg and touching the ground with both hands or taking big lunge steps and adding rotations. Then, return with butt kicking or skipping drills before moving into an animal crawl.

This can look a lot of different ways, as Ido Portal demonstrates.

Crawling is gaining a lot of popularity these days, but why should you care? Well, it's really hard and will challenge your strength and mobility at the same time. If you've never done it before, try doing a lizard crawl across a good-sized room forward and backward.

There's no limit to the number of things you can cook up here to challenge your balance, coordination, and timing—in other words, your athleticism. Some suggestions:

Come on, do I really have to explain this? Just make sure you do it somewhere that won't have you diving through the squat rack or otherwise annoying the other members of the gym.

You know this game too, but to make it interesting, stand in the middle of the room. Whoever loses must sprint to one wall—any wall—before being tagged. If they get tagged, they have to do five push-ups (or whatever you agree on) as punishment. Don't make the punishment too severe. The idea isn't to wear yourselves out, but to start sweating while being engaged in the activity.

Get into a bear-crawl position facing your opponent. You can move in any direction, but your knees cannot touch the ground. Try to slap your opponent's hand while it is on the ground. Every time one of you gets your hand slapped or touch a knee to the ground, pause the game while that person does a few punishment push-ups. Once the debt has been paid, begin again.

Note: I've seen people stand in a "bear crawl" position with a wide stance, keeping their hands close to the ground but not really on it. If you aren't keeping weight on your hands, you're cheating. Knock that shit off.

This is another classic, recently repopularized in the now-famous video of fighters Conor McGregor and Gunnar Nelson training with Ido Portal.

You can create rules like catching the stick as close to the ground as possible and only on the top 1/3 of the stick. Then, you can add layers of complexity by only allowing the stick to be caught with the left or right hand and only in a squat or lunge position. Play with it and make up your own rules.

A variation also featured in the Ido Portal video is the stick-avoidance game. The purpose isn't to hit your opponent with the stick—that would be easy. The real purpose is to move at a steady speed on a steady course and challenge your opponent to move out of the way. This is a variation of a drill called "zen archery."

Play it with a medicine ball. You can make it more interesting by throwing the ball over a net or some other barrier (called "Hoover Ball" in honor of the president that used to play this game every morning for 10 minutes on the White House lawn).

Another great variation is to throw the ball and have your partner run to it, scoop it up and toss it again in any direction. Then it's your turn to run it down. You'll quickly learn to start anticipating body language and reacting to movement. It's also been known to make people speak profanely to a higher power after about three minutes.

The Sky's the Limit

Admit it: At least one of these sounded like fun—and that's exactly the point. There is no need to waste your time in the dreaded cardio room of shame and self-loathing. All you need is a little bit of space, some creativity, and a willingness to look silly, and you'll be a better athlete for it.

Recommended Products For You

Matt Griffith has been training clients since 2008 and lives in Boise, Idaho.