5 Essential Ways To Balance Your Strong Side With Your Lagging Side!

Let's face it: everyone has at least one weakness when it comes to physique fitness. But everyone can do something about it! Find out the 5 essential ways you can balance your physique when you're pumping iron!

Let's face it, we all have weak points on our physiques. If you don't think that you do, then you either A—are a delusional, narcissistic, egomaniac, like Mike the Situation from the TV show Jersey Shore, or B—you happen to be 1 out of a billion people who were blessed with the phenomenal, but rare genetics of Flex Wheeler.

I know myself for example, early on in my bodybuilding career, I had lagging biceps, quadriceps, hamstrings, abdominals, rear deltoids, and lower back muscles. I know I still have weak points but I have been able to minimize them over the years by making the right adjustments to my training. 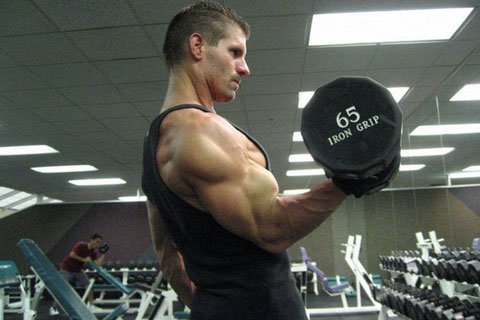 Click To Enlarge.
I Thought The Best Way To Balance Out My Weak Points Was To Double The Volume I Trained My Lagging Muscles

Unfortunately, destroying muscles and stimulating muscle growth are 2 completely different things. I didn't understand this at the time.

I thought theoretically, if you wanted to be able to go from running 2 miles to running 5 miles, you would keep increasing the volume and frequency of how much you ran until you built up the endurance to hit that 5 mile mark. So more training would produce more results. It seemed to me weight lifting would work the same way.

I thought if you wanted to force a muscle to grow then just pound the hell out of it with as many exercises and sets as you could endure. What I didn't know at the time is that the body responds to aerobic training the opposite way that it does to anaerobic training. In exercise science, aerobic activity is defined as low intensity, but long duration. Opposite of that, anaerobic activity is defined as high intensity but short duration.

The lagging muscle group I obsessed over the most was definitely my biceps. I would literally kill myself in the gym multiple times each week trying to get my flat biceps to grow. I hit them with everything, barbell curls, hammer curls, reverse curls, EZ-bar curls, concentration curls, machine curls, cable curls, you name it!

This strategy led to absolutely zero muscle growth! The only thing I accomplished with this approach to training my biceps was hours of wasted time and severe tendonitis in both wrists and forearms which put me out of the gym all together for about 5 months.

Decrease The Volume To Grow

After months worth of physical therapy and healing took place, I jumped back into my workout routine with a new approach. I had read a few articles by former Mr. Universe Mike Mentzer during my time off in regards to over training, and how recovery was the most vital, but also the most over looked element in bodybuilding. The articles explained that excessive training on a muscle group would only deplete the body's resources necessary to produce muscle growth. The information made sense to me the way it was written so I restructured my training regimen based on tips I picked up in the articles.

Instead of doing 6 sets of 6 different bicep exercises, I switched to doing just 1 set of barbell curls to failure and just 1 set of concentration curls to failure. Instead of hitting biceps 3 times per week, I only hit them once per week! As hesitant as I was to cut back the volume of my training so drastically, it really paid off for me! Within 4 months I had added 1.5 inches to my biceps, which was also accompanied by a huge increase in strength!

Each workout I was doing more weight for more repetitions, as where before, my strength would stay the same or even regress. I was so impressed with the positive impact the lower volume training had on my biceps that I decided to try that strategy on my other body parts as well. Doing so produced very impressive size and strength increases within a relatively short time frame. My legs, my back, and rear deltoids showed great progress as my physique became much better balanced compared to before.

What should you do to try and balance out your strong muscle groups with your weaker ones?

1. Take A Look At Your Training Volume

Remember that when it comes to increasing muscle size, more doesn't equal better. Consider your lagging muscle groups and look at how many total exercises and sets on each exercise that you are doing. Keep an emphasis on compound, multi-joint exercises. Sometimes adding single joint and isolation exercises to your multi-joint exercises can actually push you into overtraining territory and prevent progress.

For example, I noticed the greatest increase in the muscle mass of my chest when I stopped doing machine flyes, cable cross-overs, and dumbbell flyes, and just strictly used bench press and inclined bench press in my chest routine. Not including warm up sets, I only performed 1 very intense set on each exercise.

2. Take A Look At Training Frequency

Just as doing too many sets on a muscle group can lead to overtraining and prevent gains, so can working that muscle too frequently. One of my golden rules I preach when I'm talking bodybuilding is that as you become progressively stronger and lift progressively heavier weight, there is an increase in stress to the body which further depletes biochemical resources necessary to grow muscle. Therefore, you need to compensate for that by an increase in recovery time between all weight lifting sessions from that point forward!

As a rule of thumb, I suggest that when you reach a sticking point on a muscle group in which your strength has ceased to increase within 2 cycles of workouts, then go ahead and add an additional 2 days of recovery time between all weight lifting sessions from that point forward. This may sound drastic but doing so will allow your progress to pick back up again, just try it! 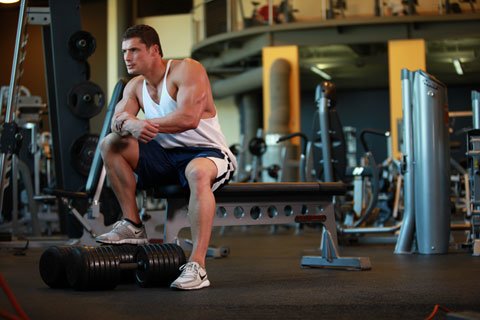 Click To Enlarge.
You Need To Compensate For Increased Stress On The Body By Increasing Recovery Time.

3. Take A Look At Your Training Intensity

Your muscles will not respond by subjecting them to the exact same stress level every time you train them. Your body will produce an adaptive response (adding more muscle) when it senses that its physiology has been threatened by a new level of stress that it isn't used to. There is however, a very delicate balance between higher intensity and overtraining that you must be aware of.

In other words you should increase the intensity but not by increasing the volume. In fact, the more intense your sets are, the shorter your workouts need to be to prevent over training.

There are a number of ways you can increase the intensity of your workouts.

To prevent overtraining, it's important to be aware of the stress our muscles are under as secondary muscle groups when we train them. People are so surprised when I tell them I only do 2 exercises for my biceps and 2 exercises for my triceps and make great progress doing so.

They tend to forget about the degree of the biceps involvement during back workouts, performing rowing movements, and also the degree of the triceps involvement that takes place in pushing exercises when training the chest. Even though they aren't the primary muscle being trained, they do end up taking on a lot of the workload during those exercises.

The same can be said for the front deltoids. They are also easy to overtrain because of their involvement during chest exercises and some triceps exercises. So much in fact, some people make better progress by not doing any front deltoid exercises at all in their shoulder workouts. 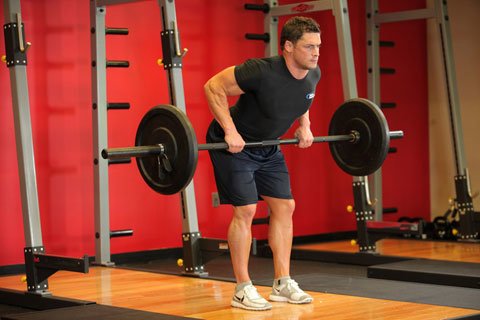 Click To Enlarge.
Many Forget About The Degree Of The Biceps Involvement
During Back Workouts, Performing Rowing Movements.

For the sake of maximizing your training intensity on your lagging muscle groups, always train your weaker muscles at the beginning of your workout when you are fresh and your energy levels are at their peak. Also do your most challenging exercises first. This way you will be able to train heavier and harder to produce better results on those genetically challenged muscle groups.

My goal is to take every opportunity to get my knowledge out there for people to use in order for them to best meet their goals.