Training with sandbags is catching on among a wide range of athletes. If you want strength and explosive power to help you rise to any challenge, step up to the bag!

Sandbag training is quickly becoming a favorite training style among pro athletes, fighters, first responders, soldiers, and everyone else who needs to be able to access strength in unpredictable settings and postures. If you want muscle control and athleticism that won't quit, along with a midsection every bit as strong as it looks, this might be just what you're looking for.

But unlike, say, barbells, sandbags have different rules when it comes to ideal loading, programming, and progression. Here are three principles you need to keep in mind to help you get the most out of sandbag training, plus we provide some movements and a workout to help you get to know the benefits of the bag!

Progressive overload is about
more than just load

In order to continually stimulate positive adaptations with training, we all know we need to apply the principle of progressive overload. Basically, this principle states that if you don't provide a new training stimulus to your body, it will cease to adapt and remain idle with its progress.

What's the most common method of enacting this principle? Throw more weight on the bar, of course! However, just because the word "load" is in the word "overload" doesn't mean this is the only method to progress an exercise. I would add that it's not the only variable you need to change if you're looking to become a capable athlete or build a well-rounded physique. You can also change variables such as the implement used, the complexity of the exercise, or take the movement into a different plane of motion.


A sandbag with multiple handles, like the Ultimate Sandbag, achieves all of those changes, and it will teach you quickly that load isn't everything. Depending on the exercise and loading position of the sandbag, you can easily amplify the difficulty of an exercise while using the same or perhaps far less weight.

Let's take the lunge as an example. A reverse lunge is performed in the sagittal plane, but also requires frontal plane stability (think balance side-to-side). This exercise can be loaded in several ways to increase the difficulty. The simplest is to hold a weight in the front-loaded position. In this stance, you still have to maintain frontal plane stability, but you also have to brace to not lean forward.

A sandbag with multiple handles will teach you quickly that load isn't everything.

Now, take an exercise unique to sandbag training: the weighted rotational lunge. The loads used in the front-loaded reverse lunge and the rotation lunge can both be equal, but the effects are drastically different. To take the rotation lunge up a notch, increase the speed of execution so the bag swings from one side to the other.

If you're looking for core and hip strength that will transfer over to any physical challenge, you couldn't do much better than this!

Perform the most complex exercise first

It's common to perform squats, deadlifts, and the barbell bench press first in a workout. Why? Well, they're multi-joint exercises and they typically use the most load. If you're training with a sandbag, however, you focus on far more than just load, so which exercises should come first? The answer is the most complex exercise.

Say you're an athlete who needs to improve your power production and hip and core stability. Sandbag training is a great way to address all three with movement patterns that are almost impossible with traditional implements like dumbbells and barbells.

I might prescribe something like a rotational sandbag-clean-to-crossover-lunge combination. Here, you have to create force with an internally rotated hip while cleaning the sandbag upward. Once the bag is received in the front-racked position, you would perform a crossover lunge. This lunge variation places a unique stretch on the outside hip and also challenges hip and core stability.

It looks challenging because it is! But you'd better believe it's also effective, if you're up to it. Good luck being up to it if you're already sapped from a half-hour of other training! An exercise this demanding needs to be tackled first. 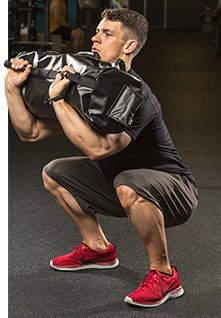 "So how do we take advantage of instability while keeping the base stable? Easy: change the loading pattern or the stability of the implement itself, as with sandbag training."

During the 1990s and early 2000s, unstable surface training—think wobble boards and BOSU balls—took the leap from the physical therapist's office to the gym. This type of training has been shown to be valuable post-rehab, but when it was applied to healthy individuals, it wasn't nearly as effective—unless, of course, the end goal was to be the butt of countless jokes from weightlifters.

What went wrong? Behm et al summed up the limitations in an oft-cited 2010 study1 when they wrote, "Since the addition of unstable bases to resistance exercises can decrease force, power, velocity, and range of motion, they are not recommended as the primary training mode for athletic conditioning." They recommended "ground-based" weighted exercises instead, while nevertheless acknowledging that "core and limb muscle activation are reported to be higher under unstable conditions than under stable conditions."

The stability of the implement can also be adjusted to create a less-stable exercise. You could foolishly leave a few barbell plates rattling unsecured on your Olympic bar, or you could try training with a sandbag that's only partially filled. Still too stable? You could even fill a sandbag with smaller bags of water rather than sand. In either case, since the contents shift inside the bag during the exercise, you will continually have to react to maintain balance and the correct body position.

This form of instability training increases the difficult of the exercise and can keep you progressing to more and more advanced challenges for months or years. Trust me, the following complex is a different animal with a sandbag, a partially filled sandbag, and a water-filled sandbag.


Sandbag Leg Complex
Perform all movements without resting. Rest 60 seconds, and then perform another round. Perform 5 rounds total.

Why suffer through another boring, painful ab routine? Work your core by making it stabilize unbalanced loads. That's what it's there to do!

Find Your Strength: Strongman Training In Your Average Gym

Strongman competitors are the stuff of legend, but you don't have to move to Iceland or Poland to become one. Here's your guide to building strongman-caliber strength in any gym.

Do More With Less: The 3 Home Gym Essentials

A stacked gym with every fitness tool known to man looks cool, but how much of it are you really going to use? Keep these three fundamentals at home, and rest easy knowing you can get strong no matter what!

Jon has coached and helped numerous clients reach and surpass their fitness goals, including high-level athletes, emergency personnel and more.