The upcoming USA did not slow anything down at the Veterans Auditorium in City on Saturday for the Los Angeles Bodybuilding, Fitness & Figure Championships. Approximately 150 athletes showed up with a very heavy showing among the men. At the end of the evening the big wins went to David Hughes for the overall, Kimm Winn (overall women's bodybuilder), Patty Farrow for figure, and overall novice went to heavyweight Larry Brown.

Taking in the scenery around the show you could find Melvin Anthony, Erik Bui (with his son as always), and Chris Cook. Rising figure star Halcyon Duarte was there supporting her mom in her first competition. Daughter and mom both trained by Kim Oddo who of course was also there watching over his many "Oddo's Angels."

New Pro card owner Mary Jo Cooke-Eliott handed out trophies and top figure competitor Jen Thaler opened the show, not in a two piece, but in a long slinky dress singing the national anthem. Bodybuilding.com man about the country and world champion, Bob Cicherillo emceed the show with figure pro Gina Alliotti, who proved to be up to the job staying with Bob's one liners when necessary.

A really fun part of the evening was an impromptu pose-down by USA competitors in the audience getting ready for this coming week. Dropping their street clothes, it was likely that many of them were ready for it already. No color and oil made for a different view but it was still great. 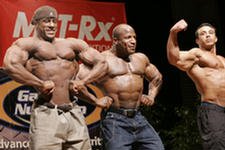 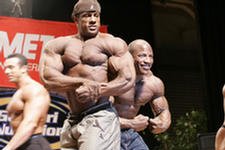 If this group was an indication of the quality of the competitors going to the USA, it is going to be one great show in Las Vegas. And you could tell who was going by just watching who was eating out of the plastic containers in the audience.

There were some real standouts on the stage this time. And at the top was the winner David Hughes. When this guy hit the stage it was a fight for second place, he was ready. If he was not perfect for this level of competition I do not know who is. The guy is big, cut, personable and has a great presence. I expect we will hear a lot more about him.

But the tear the house down support came for Larry Brown and Kimm Winn. Their individual posing routines brought more yelling and screaming than an audience of 10 times as many people could have done. And when "Chick" asked who the favorites were before the standings were announced for each, the name chanting for them was deafening.

I think everyone was amazed. A little behind the scenes info is that this was only the second show for Kimm and she has only been training for about two years. Before stepping into the gym for the first time, she had never picked up anything unless it was absolutely necessary let alone lifted weights. And who trained her? Trainer Larry Brown, the novice overall winner. 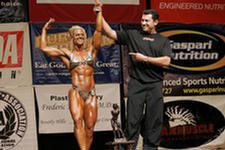 Now Larry has done a few competitions and has placed, but this time he went all out looking for nothing but a win. And this guy obviously taught Kimm well. More behind the scenes about these two; you can find them at a little known gym in Santa Ana, California called Iron Bodies.

No air conditioning, a single floor industrial space that lends itself well to pushing big weight and building big bodies. Don't go looking for a lot of shine, chrome and valet parking at Iron Bodies. This place is a real throw back to hard core lifting, check it out.

Another standout at the show was Bantamweight Steve Zenicanin. Parking in a handicapped space and walking awkwardly, Steve made his way to the stage, a journey that took him not a few minutes but 15 years. Suffering severe physical disabilities and challenges, this guy has been working to get to his first show for a full 15 years. Makes you think about that next time you might have the sniffles and don't want to work out. Steve was honored with an award for "Most Inspirational" and it was well deserved.

It was time well spent in L.A., either on stage, in the audience and for me, photographing the competition. The show went pretty smooth and everyone had a lot fun. John Lindsay did another good one. Now on to Las Vegas for the USA. And as always come on back to Bodybuilding.com for show coverage.