Ronnie Coleman becomes Mr. Olympia, Dorian Yates announces retirement, and Paul Dillett Collapses. What else can happen? Get the details and the top 15 from this review of the 1998 Olympia.

I'm not sure about you, but when I hear of an event being held at Madison Square Garden, New York City, I think of a huge boxing match, basketball match or rock concert.

In 1998 the IFBB brought the Mr. Olympia to one of the best sporting arenas in the world. With a sell-out crowd of 5600 punters waiting to see a guaranteed, new Mr. Olympia champion. Makes you wonder why they moved it to Vegas, if it isn't broke then don't fix it!

The raining champ, Dorian Yates was rumored to have thrown in his trunks (hopefully washed before hand) and leaving way for a new champion. I was just as excited as the next man to see something new happen in the sport, as watching Dorian run the roost for the last six years was quite honestly becoming a little boring. Sorry Dorian, but I ended up feeling the same way about Ronnie, six years down the track. 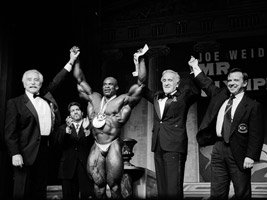 I traveled to the Big Apple from rainy England with two of my mates and decided to share a one-bed room in the hotel Pennsylvania (Not sharing the same bed, I would like to add), due to the astronomical prices of the rooms in NYC and also taking in to consideration that we had short arms with deep pockets. We must of saved about $20 each.

I remember the weather being pretty bloody hot that trip and a not so fond memory of getting stuck in a broken hotel lift with 10 bodybuilders for about 30 mins.

Not that I have anything against being stuck in a small confined place with ten huge men, but the air conditioner had stopped working and things where getting far too hot and sweaty in there for my liking. As if I would not get enough big sweaty men that weekend (watching the competition that is).

On With The Show

The show was hosted by the American comedian Sinbad, who started the evening off by taking the piss out of bodybuilders and training. Very Funny! Well I thought so.

Back to business, I distinctly remember, six time Mr. Olympia, Dorian Yates being called up to the microphone by Wayne Demillia. He announced that it was all over and he was officially retiring from professional bodybuilding, due to a triceps injury a few months before his last Olympia victory, followed by surgery to repair the tear, he decided that it would be impossible to come back and be better than he was in previous years.

With the runner up for the last 2 year, Nasser El Sonbaty and Flex Wheeler returning to the stage after dropping of last years show, Levrone with 19 Pro titles under his trunks and Shawn Ray entering his 10th Mr. Olympia it was going to be one of the toughest battles to be seen on the Olympia stage. Not! 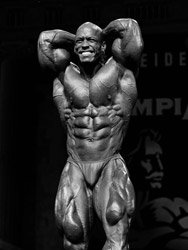 Click Image To Enlarge.
Shawn Ray At The 1998 Olympia.

Most spectators presumed it was just a matter of Yates appointing his natural successor (Flex Wheeler), but fate had a surprise for everyone, the dark horse, Ronnie Coleman stole the Sandow trophy with the ease of a cop arresting a Granny for shoplifting candy in Macy's.

I remember being in shock when Ronnie entered the stage for the first time and I don't think I was the only one. What an improvement he had made in a year. I bet Dorian was thinking, "It's a good thing I retired before this year's competition." Huge and ripped, he was by far the sharpest he had ever been. He blew all of his opponents away for muscularity and having the most striated glutes I've seen. It must have been fricking painful just sitting on that arse. 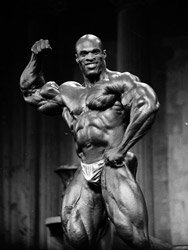 Click Image To Enlarge.
Ronnie Coleman At The 1998 Olympia.

Obviously very proud of his buns, he kept lifting his trunks up to reveal his best muscle group. He may have out muscled Flex but did not have the classic lines or have the posing ability of Wheeler.

In the best shape of his life, he looked fuller and tighter than he did at the Arnold in March when he defeated Nasser for the title. So it made sense to all bodybuilding fans that he would take the Olympia as Nasser was the runner up for the last two years. It was not to be, with the judges going once again for mass over perfection. Flex did not take this lying down and pushed Ronnie to the max for this new position. 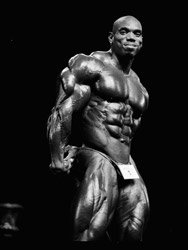 Click Image To Enlarge.
Flex Wheeler At The 1998 Olympia.

Big Nasty Nasser must have been rubbing his hands together after Dorian announced his retirement, thinking all I have to do is come in as big and hard as possible and I will be victorious. This must have been the peak of Nasser's career and would've have been very unhappy when Ronnie came in looking the way he did.

Nasser looked very hard from the front but looked like a different bodybuilder from the rear (Don't we all?), smooth with no real separation. And to top it all he posed to Dorians old music. Shame.

The Maryland Muscle Machine (Now Mr. Hollywood, I can think of a few more appropriate to that name, lol) came to the show looking huge and full but lacked the separation that we had seen in the past. He seemed to have made no improvement from last years show.

He did improve as the day went on it but it was too late by the time the evening show had arrived. If only he could regain his 1995 Olympia condition he could've taken 2nd place again. 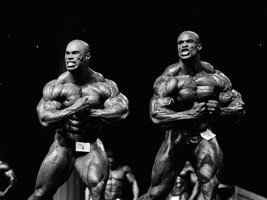 With an excellent record placing in the top five for the last 8 consecutive years no one was writing him off as a threat to take this years Sandow. He showed up looking bigger and at his usual great condition.

I can't remember the last time Shawn competed and got his timing wrong with his diet - A true Professional! I would of placed Ronnie and Flex above him but that would have been it. He must have been disappointed with his lower than last years placing, but like a true Pro he kept a smile on his face throughout the awards. 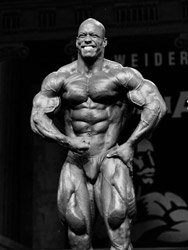 Click Image To Enlarge.
Shawn Ray At The 1998 Olympia.

Not making the top six in the Olympia since 1994, no one was expecting Chris to take the title of the new Mr. Olympia. He entered the stage in fine form and very symmetrical, but without the beautiful shape of Flex Wheeler and not the mass of Ronnie Coleman he probably deserved this sixth position. Not sure if his pierced eyebrow went down well with the judges. I'm sure that jewelry is still not allowed by the IFBB. 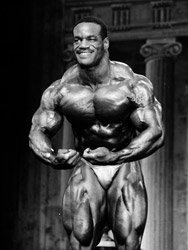 Click Image To Enlarge.
Chris Cormier At The 1998 Olympia.

From a land down under, the monster with a flattop looked as good as last year, muscular and ripped, but didn't get many callouts in the comparison round and was defiantly overlooked. 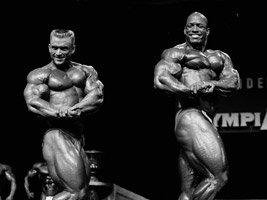 The next best thing to come out of England and from the same town as Dorian, in fact from Dorian's gym was Ernie Taylor. This being his Olympia debut, he seemed very excited to be there. Shame he didn't get chance to compete against his mentor.

He was in top shape and made sure the judges got an eye full of those phenomenal triceps. I've known ET for a long time and got so excited to see him on stage that I forgot to reload my camera when it was his turn to do his routine. I was firing away thinking "God, I've got some great shots here," and then it dawned on me that I'd taken about 200 shots on the one roll of 36 exposure film - Bollocks! 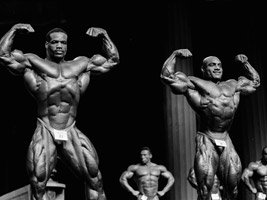 Not really getting a look in with only one callout in each round, he'd either won or placed really low. Guest what! Not in the best shape of this life he looked a little soft and flat. 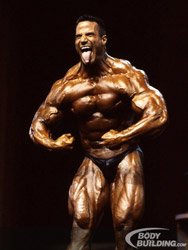 Click Image To Enlarge.
Mike Matarazzo Fux At The 1998 Olympia.

Lighter than last year and not because he'd lost more fat. He had lost a bit off his distended tummy though, thanks Fux. Another routine to Dorian's old music, holy Fux, ok that enough I know. Lucky to make the top 10 in my eyes. 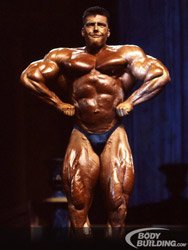 Click Image To Enlarge.
John Pierre Fux At The 1998 Olympia.

Highly overlooked. No way should have been beaten by Fux, or Matarazzo. In great condition and very balanced he deserved to get a callout with the top 6 guys in all rounds. 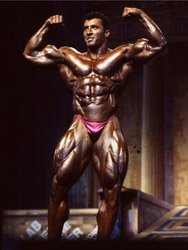 Click Image To Enlarge.
Milos Sarcev At The 1998 Olympia.

In his first Olympia, local boy looked like a ninety's version of Rich Gaspari. Vascular, ripped and a little blocky he looked impressive but not Olympia material, well not yet. 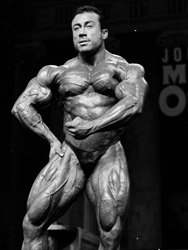 Click Image To Enlarge.
Johnny Moya At The 1998 Olympia.

With a very pleasing shape and ripped he just looked a little small up against the likes of Ronnie. What a very entertaining posing routine he preformed and the best washboard abs in the business. I would've put him above the likes of Fux, Moya and Mattarazzo. 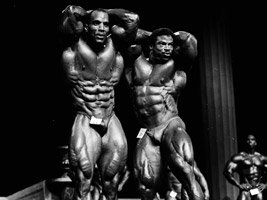 Another overlooked physique. Nicknamed the Batman from the WWF days, he never really got a look after returning to the IFBB. Shame! He probably has the best calves seen on any bodybuilder. 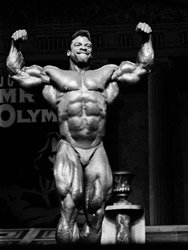 Click Image To Enlarge.
Aaron Baker At The 1998 Olympia.

The tallest competitor on stage and probably weighing the most, he looked a little off and did not look as good as his Night of Champions appearance. With loads of mass he just looks a little blocky and messy. If he gets his symmetry sorted out he could be a threat to the likes of Ronnie. (He became the only man to beat Ronnie up till his defeat to Jay Cutler) 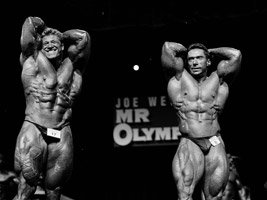 Dropping out of the competition due to passing out back stage after only 10 minutes of the pre-judging was Paul Dillet. He looked like placing in the top ten. 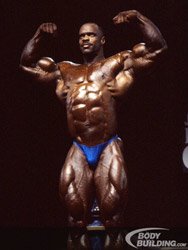 Click Image To Enlarge.
Paul Dillett At The 1998 Olympia.

Nobody at the show knew that they were witnessing the start of an 8-year reign and domination by Ronnie Coleman. Neither did we know that the Olympia would move to its new home, Las Vegas the very next year and stay there for the next ten years or so.

If you look at the 1998 line up there are only a handful of the athletes still in the game a decade later. 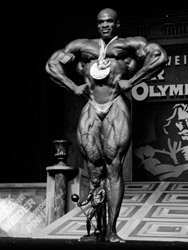 I wonder who will be around in another ten years and what competitors from today's line up will still be working their arses off for the ultimate title in Bodybuilding, the Mr. OLYMPIA.