If you're not seeing the fat-loss results from your diet and workouts, think of sleeping! Find out how more quality sleep can help you succeed.

As you begin scrambling for the latest and most scientific information relating to stripping off those last few layers of body fat that seem to cling to you for dear life, you're likely coming across a wide range of content concerning the best foods for belly-fat loss.

Maybe you're also finding the best exercises to help boost the metabolism, the best workout designs that promise to add more muscle definition, and the best times to be eating if you hope to maximize the amount of fat you burn throughout the day.

There's no question about it, what you eat and how you exercise are two significant contributors to the overall success rate you see. But after that, it's important to not overlook some of the other contributing factors that can sway the type of progress you experience.

"There's no question about it, what you eat and how you exercise are two significant contributors to the overall success rate you see. But after that, it's important to not overlook some of the other contributing factors."

Make no mistake, achieving maximum fat loss and getting that "ripped" look that you see on the cover of your favorite health and fitness magazine is a 24/7 endeavour. If you aren't on top of the game at all times, there is a large chance you'll falter.

One specific component that very often gets overlooked is that of sleep. No one ever thinks of sleep being a factor in success since, after all, you are barely conscious while you sleep. How much damage could you really do to your progress while you are sleeping?

The answer is that it's not what you do while you're sleeping per se, it's the quality and quantity of sleep you get. Let's dig a bit further so you can see the profound connection sleep has with your weight loss.

One of the first major problems that is associated with a lack of sleep is an increased daytime cortisol level. As you may have already known, cortisol is a hormone that is released within the body that works to break down body tissues. In times of stress, you will find cortisol levels very high since the body is getting ready for the fight or flight response mechanism.

Dieting itself puts the body in a stressed state since it is taking in fewer calories than it would ideally like to function, therefore you're already at risk for such problems as muscle mass loss (which occurs when high cortisol levels begin breaking down the body's tissues).

In one study put on by the Laboratory of Physiology in Belgium, researchers noted that those who were shorting themselves of sleep noticed higher afternoon and early evening cortisol levels than those who were not.

Have you ever found that after a late night out or a night of simply tossing and turning where sleep was hard to come by, the next day you were craving carbohydrates like a pregnant woman a few days before delivery?

One study conducted in Chicago noted that ongoing sleep deprivation is responsible for a number of changes in the hormonal release and metabolism of humans, especially increased hunger and appetite.

Often in very fatigued states the body senses this fatigue and perceives a low supply of energy as a result, kick-starting internal drives to eat (hunger).

In addition to this, the researchers also pointed out that sleep restriction can decrease glucose and insulin sensitivity, two of the most critical factors that are involved in the development or prevention of diabetes as well as regulating the satiety you feel after a meal is eaten.

While you may think staying up for that extra hour to catch your favorite TV isn't really all that detrimental, if the truth is told it could be dramatically increasing the chances that you develop diabetes.

For most people on a fat loss diet, the visceral fat is the fat that's most important to lose because it's the type that will set you up for the greatest overall health threats.

While you may see subcutaneous fat gains easier (as this is the fat directly under the skin), a high level of fat surrounding the organs is really going to be problematic and could eventually be life threatening.

Researchers from the John Carroll University used a continuous dark versus continuous light exposure test to assess the impacts on a group of animals. They wanted to measure melatonin levels, the metabolic parameters, the circadian rhythm activity patterns, as well as any behavior changes that took place when animals were either placed in a standard condition with 12 hours of light and 12 hours of darkness, 24 hours of darkness, or 24 hours of continuous light. 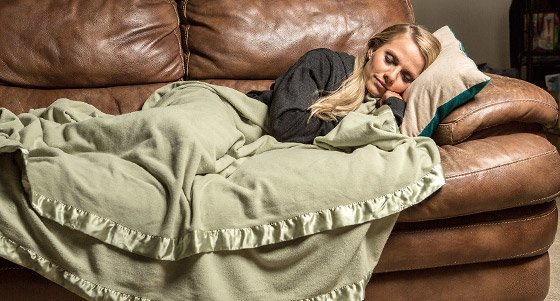 "For most adults living a regular lifestyle with added training, 7-8 hours of sleep is optimal."

After the study was completed the researchers noticed that the 24 hour light animals demonstrated a significantly greater visceral adipose tissue than the other two groups who did have darkness hours as well as those who were always exposed to light noted a lower level of overall activity and started to become extremely irritable and easily excited.

The body naturally wants to maintain its normal circadian rhythm with proper light and dark periods for wakefulness and sleep, and when these are altered, negative events take place with regards to body fatness and overall health.

In another study performed in the Czech Republic and published in Physiological Research, researchers found that optimal body weight was strongly associated with test subjects who maintained seven hours of sleep each night, making that the guideline that you should try and shoot for.

While some rare individuals may find they feel fine on much lower levels of sleep (5-6 hours) and others may find they need a great deal more (9+ hours per night), for most adults living a regular lifestyle with added training, 7-8 hours of sleep is optimal.

Generally the more intense and frequent your training sessions are, the more sleep you may require in order to recover properly. In these situations if 8-9 hours is not manageable, short afternoon naps can sometimes do the trick.

Finally, you must not overlook the connection between the amount of sleep you get and your overall exercise performance. When you are short on sleep, it's quite typical to find yourself struggling to maintain the usual level of exercise that you normally would tolerate quite well.

In addition to this, since sleep is the primary time the body recovers from exercise, it's also when you will be rebuilding your torn muscle tissues. Without this recovery time, you're going to go into your next exercise session at a disadvantage.

One of the key recommendations for combating over training syndrome, which will quickly take you away from your workouts and limit further fat loss, is getting quality sleep. Failing to do so could mean you having to take time away from your program, which will without question of a doubt, slow you down.

So make sure you're getting your 7-8 hours of sleep each night. Not only are you going to feel better, think clearer, and be much stronger when it comes to battling those food cravings that are so common with fat loss diets, but you'll also really be helping promote better long-term health as well.

Cold weather often brings a serious craving for comfort food. Here are 4 savory recipes that will provide the taste of home, without the extra calories!

Everyone gets tired of shakes once in a while. When it happens, eat your whey with these fitness-pro-approved snack recipes!

The world's greatest bodybuilder didn't always have the incredible symmetry you see in photos today. Here's his 4-step approach to overcoming a lagging muscle group.