Having previously touched upon several dietary supplements purported to enhance fat loss, let's touch on just a few more popular fat loss products that are available, and review the science behind them.

Conjugated linoleic acid is a supplement that has been proposed to increase metabolic rate, increase fat utilization, and thus, with these combined, result in weight loss.

Conjugated linoleic acid, also known as "CLA" is a particular type of fatty acid (I could bore you with gruesome details, but if you're that interested, email me). CLA is found primarily in dairy products (not in skimmed dairy products) and meat, specifically, beef and lamb. The typical dietary intake is around 212 mg/day for men and 151 mg/day for women.

CLA is an umbrella term for what are known as geometric isomers (fancy name for different chemical structures). It has been studied for various effects on health including: effects on the immune system, cancer prevention, blood lipid and glucose levels, and, of course, body composition / weight loss.

The research on CLA and body composition in animals has been extremely positive. For example, it has resulted in leaner pigs, mice, rats, and cows. So while your significant other may think you are a pig, it doesn't necessarily mean you are. These positive results have not been so consistent with humans.

Most researchers have reported no change in body composition with CLA supplementation in humans. Furthermore, CLA may potentially have negative effects on blood lipid levels and glucose levels though these results have been mixed as well. 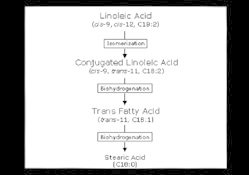 A recent review study published in the American Journal of Clinical Nutrition reviewed the few human studies available on CLA. This review noted that the dosages in the studies reviewed ranged from as low as 1.4 g/day (approximately 6 times that of "normal" dietary intake for men) up to 6.8 g/day (approximately 30 times that of the normal dietary intake for men).

This is important, because one of the most common reasons for the lack of positive findings with most studies is that subjects may not have been taking the proper dose. Does that give you the liberty to load on my CLA; well, we are unsure if even a higher dose would be effective.

In this review study, none found a significant reduction in body weight and only 2 showed a significant, but small decrease in body fat. The authors drew the conclusion that

"the results of the studies in humans indicate that the effect of CLA on body fat is considerably less than that anticipated from mice studies..."

In addition to the concern I mentioned earlier about the low-doses recommended and used in most studies, there is the potential that various chemical structures yield different results.

One research group followed up to this last question and measured two different isomers against one another. Again, the authors noted there were no significant differences among any of the groups for fat loss, body weight loss or dietary intake.

It is interesting that CLA has been shown to be very effective at lowering body fat in mice; however, looking closely at the data across studies reveals that the dosages consumed by the mice are nearly 20 times more than that which has been used in studies. Whether or not such a high dose is effective is one question; whether or not it is safe is another.

What I do know is that taking over 50 g CLA each day would clearly be way too expensive. There is also come concern that too much CLA would result in pro-oxidants, which aren't a good thing.

Chitosan is supposed to decrease the amount of fat absorbed and digested. Chitosan is extracted from the shells of crustaceans. The goal with use of this product is that it will bind to the negatively charged fat in the intestine and excrete it. However, while in theory this sounds promising, the results of the published studies are not.

A recent study suggested that treatment with chitosan did not result in a clinically significant change in body weight compared to placebo. This 24-week, double-blind, placebo-controlled, randomized trial was completed on 164 male and female subjects.

Furthermore, at baseline, 12- and 24-weeks, blood samples were taken to gather information on serum lipids; it seems logical that if chitosan does in fact decrease fat absorption, there would be a positive effect on lipid levels too.

At the end of 24-weeks, the researchers found no significant changes among any of the outcome variables measured. Those in the chitosan group lost just over 1 lb more than the 24-week study period; however, this is not statistically or clinically significant.

This study also combined lifestyle and dietary advice throughout the program to all subjects and concluded that:

"it therefore seems appropriate to focus public attention on the proven effective means of weight loss such as improved nutrition and increased physical activity."

There are some safety concerns with chitosan as well. Although supplementing with chitosan does not appear to be effective at enhancing weight loss, research has suggested that use of this supplement does in fact enhance fat absorption and elimination.

Because of this, one common side effect is diarrhea. There is also concern that some minerals and fat-soluble vitamins would be excreted as well.

Chromium is an essential trace mineral widely used in fat loss supplements. In fact, according to a report in 1999, approximately 10 million Americans took chromium supplements and spent about $150 million per year on the ingredient, making chromium the second largest selling mineral after calcium. This is despite the fact that many well-conducted studies using chromium have not supported its claims as a weight loss agent.

Researchers have pretty much labeled chromium as the "do everything mineral." It has been suggested that it's effective for diabetes, high cholesterol, weight loss, and lean body mass gains or preservation.

One 12-week, double-blind, placebo controlled study tested the effects of 400 µg/day of chromium picolinate supplementation on body composition, resting metabolic rate, and strength along with several other biochemical parameters. Thirty-seven subjects completed the study, in which each participated in a supervised exercise program, to increase compliance among subjects.

All subjects also completed diet records to reduce the confounding factor of energy changes or difference throughout the 12-week protocol. The results at the end of the study showed that supplementing with 400 µg/day chromium picolinate for 12-weeks had no significant effects on any of the outcome parameters measured: body composition, resting metabolic rate or strength.

Today we learned indirectly that the best way to lose weight and "burn fat" is through a sound diet and exercise regimen; few dietary supplements can do much in the way of helping speed up this process.