Make The Most Of Your Pre- And Post-Workout Nutrition

Make the most of your training sessions by perfecting your on- and off-season workout nutrition with these tips from some of BodySpace's best athletes!

Having good pre- and post-workout nutrition is vital for fitness success. Of all the meals you consume during the day, these two might be the most important. What you eat prior to hitting the weights influences your performance in the gym, and what you eat afterward influences how well you recover. Together, these are essential components to determining your overall progress.

If you aren't quite sure what foods you should (or shouldn't) eat to fuel your goals, it helps to take a look at how the experts do it. Instead of compartmentalizing foods into "good" and "bad" categories, you need to build a strong nutritional foundation that supports your current fitness goals.

To help shed light on this issue, check out how some of the best athletes on BodySpace structure their workout nutrition and transition between their on- and off-season diets.

When it comes to his on-season diet, James Joseph Pulido is fortunate that, unlike many competitors, he's never had to drastically cut carbs to be photo-shoot ready.

"Carbs are the body's first and easiest form of energy to be broken down, so having them around workouts—regardless of the time of day—is important for an effective training session," he says.

"I am a flexible dieter myself, and I don't think anyone should have to cut certain foods out of a diet—unless they're doing so for health or allergy-related reasons." Pulido adds. His favorite carbohydrate go-tos include oatmeal, bread, rice, and cereal. He even eats the occasional muffin to fuel his hard-earned gains. 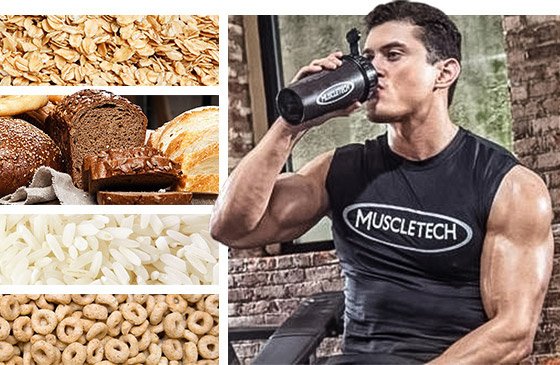 James Joseph Pulido: "Carbs are the body's first and easiest form of energy to be broken down, so having them around workouts—regardless of the time of day—is important for an effective training session."

Pulido regularly maintains an intake of 300-350 grams of carbohydrates per day on-season, bumping them up to 450-550 grams per day off-season. This allows him to keep his carbohydrates higher during a cutting phase.

"I haven't dropped my carbs under 300 grams in over a year, and I attribute this to my off-season 'break periods,'" he explains. On a rare occasion, when he does have to drop carbs to get cut quickly, Pulido makes sure he keeps higher-carbohydrate foods centered on his workout.

As Pulido transitions into his off-season phase, he slowly adds carbohydrates into his day, allowing his body to adjust and adapt. "I like to maintain a low body fat, so slowly adding in calories after a long cutting phase is important to me," he says. "I'm not looking to add any more size."

For those who are looking to gain size in the off-season, James recommends following a slower approach: taking away calories more slowly during a cut, and adding them back in slowly to keep fat gains at bay.

For fitness model and MuscleTech athlete Jimmy Everett, there's no real transition between the on- and off-season. It's all about year-round leanness. "Modeling requires me to stay roughly the same year round," he explains. "I don't really have a bulk season anymore."

Nevertheless, Jimmy takes his pre- and post-workout nutrition seriously. He's proof that staying cut doesn't mean being hungry. "For my pre-workout meal, I love to have six egg whites with two whole eggs, along with a cup of old-fashioned oatmeal," he says.

This basic, clean combination of quality protein and complex carbs has always worked well for him. On occasion, Jimmy throws in a Diet Coke along with his favorite pre-workout product, Neurocore. 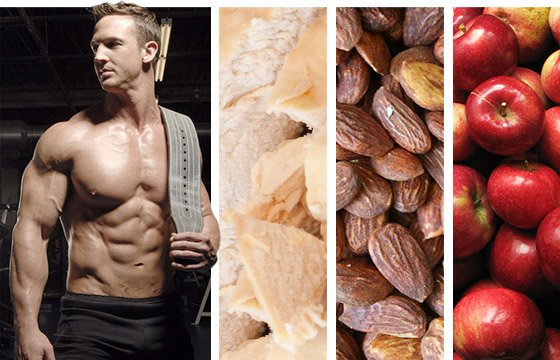 Jimmy Everett: "For my pre-workout meal, I love to have six egg whites with two whole eggs, along with a cup of old-fashioned oatmeal."

As he moves into the post-workout period, Jimmy makes sure to chug a shake immediately, fueling his body with at least 30 grams of protein, Amino Build for added BCAAs, and Creacore to saturate his creatine stores and increase muscle growth and strength.

Since staying as lean as possible is a priority throughout his year, Jimmy's carbohydrate intake stays at a moderate level. After his shake, Jimmy eats 8 ounces of chicken breast or lean red meat along with 12-15 almonds and a piece of fruit—typically a banana or an apple.

As competitor and physical therapist Elissa Martis transitions between her on- and off-season, the primary changes made to her pre- and post-workout nutrition revolve around one thing: carbs. "During my prep/on-season training, I stick to a higher protein, moderate carb, and low fat intake," she says. "During the off-season, or post-competition time, I'll move over to a lower protein, moderate carb, and moderate fat intake."

In general, Elissa tries to consume between 90-150 grams of protein split between her pre- and post-workout meals. The exact number varies depending on what lifts she plans on doing during the workout itself. The protein source varies, too. "During my on-season, I consume more lean red meat to hold muscle fullness because I tend to lean out easily," she explains. "Off-season, I'll vary my protein sources more between chicken, turkey, fish, and steak." 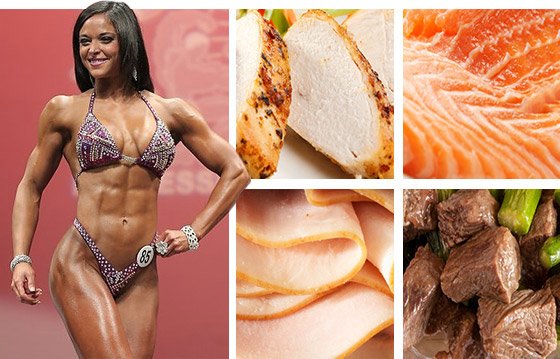 Elissa Martis: "During my on-season, I consume more lean red meat to hold muscle fullness because I tend to lean out easily. Off-season, I'll vary my protein sources more between chicken, turkey, fish, and steak."

Elissa's carbohydrate choices tend to stay the same regardless of what season she is in, with only the quantity changing. "I respond well to a carbohydrate-based diet, so I choose to consume carbohydrates in five of my six meals each day."

Before her workout, Elissa prefers sticking to lower-glycemic-index carbohydrates like sweet potatoes or oats because they provide sustained energy that can be used to fuel her long workouts. After she's crushed it in the gym, she'll eat higher GI carbs such as white rice or red potatoes because they digest faster and quickly replenish glycogen.

Some of the best advice fitness model Dave Dreas has received from the fitness industry: Your post-workout meal is the most critical meal of the day. There are a few reasons for this. "Post-workout, your muscular supply of glycogen is drained, making your muscles hungry for nutrients," he explains. "This is the time you want to decrease protein breakdown and increase protein synthesis, so it's vital to get enough protein and carbohydrates after you finish each workout."

Dave's post-workout meals are quite consistent, whether he's on- or off-season. "I might change my food sources to align with a cleaner diet when I'm in the on-season but, for the most part, my macros remain the same." 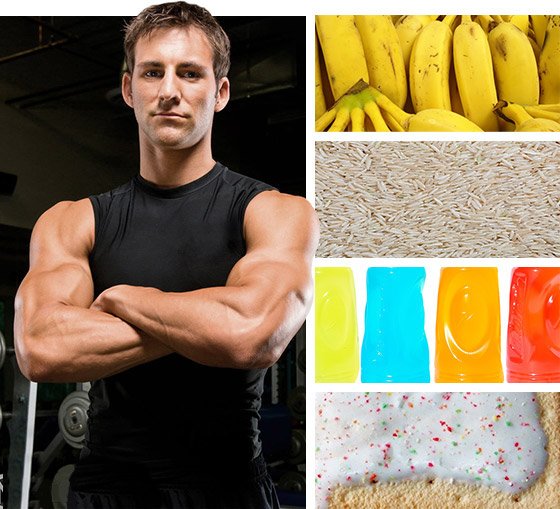 Dave Dreas: "I like to take a pre-workout drink with caffeine, usually alternating between a double shot of espresso or Nano Vapor."

When dieting, Dave would rather alter his body composition by cutting back on other meals while leaving his post-workout meal alone. After a hard workout, he takes in about 50 grams of protein and 60-80 grams of carbohydrates, which varies depending on his current goals. Some of his favorite carb sources include bananas, brown rice, Gatorade, and Pop Tarts—all eaten within 30 minutes to an hour after training.

While Dave credits post-workout nutrition as essential to his success, pre-workout nutrition's no slouch, either. For Dave, this is where timing plays a huge role. "I won't eat much of anything about 1-2 hours before the workout," he says." If I do, it's just a simple sugar such as a banana or Pop Tart."

Dave does, however, make an exception for a pre-workout kick. "I like to take a pre-workout drink with caffeine, usually alternating between a double shot of espresso or Nano Vapor," he reports.

Tricia Ashley Gutierrez is another athlete who understands the basics of smart pre- and post-workout nutrition. Because she has Hashimoto's disease, a condition in which the immune system attacks the thyroid and leads to hypothyroidism, Tricia needs to keeps her meals clean all year. For her, this means very similar pre and post-workout meals, no matter the season. 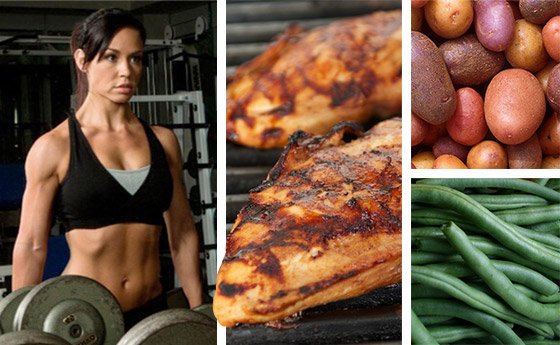 Tricia Ashley Gutierrez: "Before every workout, I like to make sure that I eat enough carbs to help fuel me and keep my strength up."

"Before every workout, I like to make sure that I eat enough carbs to help fuel me and keep my strength up," she explains. Off-season, Tricia eats something 30 minutes before she lifts—typically 4 oz of a lean protein source like chicken or turkey along with half a cup of red potatoes and a cup of green beans for carbs. After her workout, she'll take a heaping scoop of chocolate protein along with one cup of water and half a banana or whole apple.

As she moves into her on-season period, the only thing that changes with Tricia's pre- and post-workout nutrition is that she swaps out her protein powder for whole food. Her on-season post-workout meal consists of 4 ounces of chicken and an apple.