Is Chocolate A Fit Or Fat Food?

We all know a diet of Butterfinger and Baby Ruth bars will make you pack on pounds, but is there a way to make chocolate work for you rather than against you? Science has the surprising answer.

Halloween pumpkins, Santa Claus, Valentine's Day hearts, and the Easter Bunny: These festive symbols all have a common thread, or more accurately a common taste—chocolate! I can't think of any other food that is associated with as many special events and celebrations as chocolate. It comes in every shape, is served world-round, and also targets some of the most fundamental human cravings. Fat? Check. Sugary carbs? Check. Energy? Bonus!

As children, the rule of thumb when it came to chocolate was elation before hesitation. As adults the inverse is more often the case. That's because chocolate's hefty levels of calories, sugar, and fat have secured its position toward the top of the "foods to avoid" and "special occasions only" lists. This notion has been reinforced by countless dietary schemes that are more or less built around the old saying, "If it tastes good, it must be bad for you. And if it tastes amazing, it must be even worse." 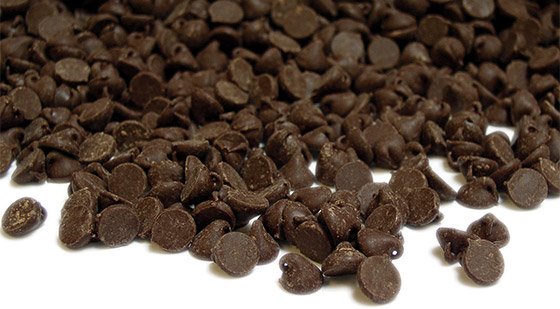 In recent years some amazing research has revealed that chocolate—or at least its base ingredient, cacao—might work for you, not against, when it comes to achieving a fitter, healthier body.

However, in recent years some amazing research has revealed that chocolate—or at least its base ingredient, cacao—might work for you, not against, when it comes to achieving a fitter, healthier body. The powerful nutrients in this simple bean can help limit fat storage in the body, in addition to providing mood, circulatory, and cell protection benefits. And those are only the benefits we know about.

The time has come for us to reclaim chocolate! Let's rethink its reputed sinfulness and explore the ways you can enjoy it without guilt.

The Food of the Gods

Long before jolly old Saint Nick and his reindeer, the Mayans and the Aztecs1 ruled the Americas. The reverence these civilizations had for chocolate went to a level that may seem extreme even to today's ardent chocoholics.

The Aztecs used what they called "the food of the gods" as currency, and it was also the basis of what their leader Montezuma called "the divine drink." Only the upper crust was allowed to sample this heady concoction, which included roasted cacao beans, vanilla, and chili peppers.

Despite the drink's bitter taste and cold, sludgy consistency, it was powerful stuff. The Spanish conquistador Hernan Cortes noted that "a cup of this precious drink permits a man to walk for a whole day without food."2

The Aztecs called it xocolatl, but since it could be the first sports drink, I like to call it "Montezumade." No matter what we call it, its spirit lives on in cacao's scientific name, Theobroma cacao, from the Greek words theo (god) and broma (drink).

Cacao was brought back across the Atlantic in the 16th century, where it was sweetened and refined to match European tastes. The intercontinental fascination—and the refining and sweetening—continued escalating throughout the centuries into today's multibillion-dollar chocolate industry.

Xocolatl, the "Divine Drink" of the Aztecs 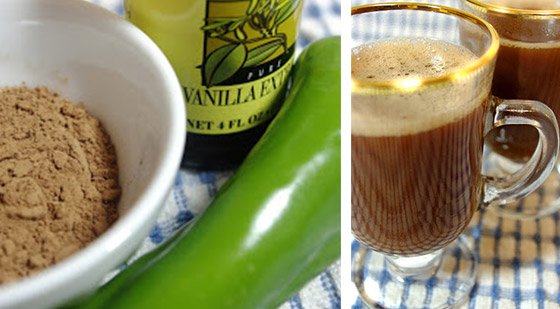 Most people laugh when I tell them that chocolate is a fruit that grows on trees, but it's true! The cacao tree grows in tropical regions in Central and South Americas such as the Amazon and Orinoco river basins. 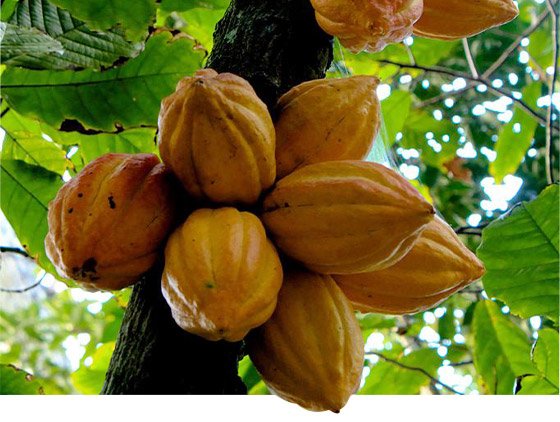 The cacao fruit's pods contain seeds or "beans" that are rich in nutrients and fat. The seeds, when removed, can be ground into cocoa paste. It becomes cocoa powder once varying levels of the fatty cocoa butter are removed.

Cocoa powder on its own is pretty acrid stuff, as are the raw cacao nibs that have begun showing up in health food stores in recent years. But it's still packed with remarkable nutrients—including a few you can feel working.

One is theobromine, a type of kinder, gentler caffeine responsible for mild mental stimulatory properties, and which is also present to a lesser extent in some teas and in yerba mate.

On the other side, cacao also contains the essential amino acid tryptophan, which is a precursor to the calming neurotransmitter serotonin; and anandamide, which is also known as the "bliss molecule" for its ability to promote relaxation.

The counterbalancing outcome of these of nutrients is a relaxed energy sometimes referred to as the cacao "buzz." Researchers have been able to show a clear mood improvement in research studies wherein participants consumed a chocolate product.3-5

However, many of those same study participants expressed feelings of guilt due the association between chocolate and unhealthiness. This buzz kill is unfortunate because cacao starts doing a lot of good once it's in your body.

A Cardiovascular and Cellular Champion!

A lot of the positive press about chocolate in recent years has revolved around a class of nutrients called flavonoids, which it contains in spades. These fascinating plant products are renowned for the positive effects they can have on circulation and cardiovascular health.

In a few prominent studies over the last decade, flavonoids from cacao have been shown to support the mechanics of optimal blood flow as well as desirable blood pressure and cholesterol levels.2,6-9 One study showed that just two weeks of including dark chocolate in the diet increased the potential for additional blood flow that could be accessed when necessary.9 And as anyone who has heard of "blood doping" knows, having more blood to deliver to muscle during and after exercise can translate to optimized performance and recovery.

How does this work? Well, for one, cacao is rich in arginine, the amino acid that is the immediate precursor to nitric oxide. And nitric oxide, you may have heard, is a key regulator of blood flow that works by increasing the diameter of blood vessels supplying body tissue—including muscle.8 Chocolate also seems to have a say in how much nitric oxide is made and how long it lasts in tissue. And, let's not forget that regular dark chocolate consumption also has been clearly linked to lowering total and LDL cholesterol levels, despite the saturated fat it contains.15-16

Cacao is also packed with antioxidants, including but not limited to the famous flavonoids. Antioxidants are critical for hard-training people who burn more calories, and thus produce more free radicals in their bodies.

Unfortunately, it's not clear at present to what extent we can expand these conclusions to muscle damage and recovery after resistance training. This is certainly an important area waiting for exploration. But the overall health benefits from cacao are increasingly clear.

Chocolate for a Leaner, Healthier Body?

As the dots pile up in the "pro-choco" column, you may be tempted to think purely in terms of math: "Do the overall benefits of eating chocolate outweigh the caloric cost?" Unfortunately, there's no simple way to answer that question, because those fantastic flavonoids do more than help your heart. They might also help to keep you lean!12

One study, for instance, concluded that cacao components can reduce the efficiency of carbohydrate- and fat-digesting enzymes, which could benefit body weight management.13 Other research suggests that cacao nutrients might also work at the genetic level, reducing the activity of genes that produce proteins which increase fat storage.14

Interestingly, in the cycling study mentioned above, the researchers also noted that the levels of fatty acids in the blood increased during cycling, which suggests greater release from fat tissue.10 This is promising, but cocoa and fat-loss connections are another area that could use further research and will no doubt get it.

Get Your Square A Day!

In case you haven't figured it out already, I firmly believe that chocolate and fitness can coexist … with a caveat: The health benefits from chocolate come from the cacao part, not from the additives that the Willy Wonkas of the world use to make it sweeter, creamier, and subsequently lighter product known as cocoa. So think in terms of "cacao," not "chocolate." 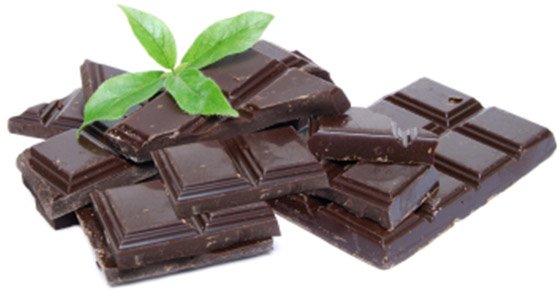 In general, choose products greater than 70 percent cacao, which is dark but still sweet enough to be appetizing for most people.

When choosing chocolate, read labels. Look for darker, lower-fat, and lower-sugar varieties, and in particular, the products that clearly call out the percentage of cacao. In general, choose products greater than 70 percent cacao, which is dark but still sweet enough to be appetizing for most people. Shoot for 1.5-2.0 oz. of dark chocolate, which will deliver the level of flavonoids determined in several studies to support cardiovascular benefits.

Most people find they can't eat dark chocolate in the same quantities as milk chocolate, but it's nevertheless important to keep in mind that even at that high of level of cacao, you will still get calories from fats and carbohydrates. The amount is roughly 200 calories per 1.5 oz., depending on the manufacturer.

However, much of this will occur naturally, coming from the cacao itself. A milk chocolate product containing about the same calorie level may have double the sugar (24g versus 12g) of dark chocolate, and only one quarter of the fiber content.

So be selective and be restrained. But don't beware, because chocolate is good for you.