When you commit to a fat loss diet, you may think you have to cut bread out completely! Time to rethink your options! These bread recipes are tasty and super-healthy, and they won't ruin your diet! Check 'em out!

After making the decision to go on a fat loss diet to strip off those last few pounds that just won't seem to budge, the painful realization may set in that you're now going to have to say so-long to many of your favored higher-carb foods in the diet.

Bread, pasta, cereal—all could be banished from the plan depending on the specific requirements that your selected diet calls for. For many people, it's not cutting out fast food or that bag of chips they kept in their pantry for when the late-night munchies set in that's the problem. They can actually do that reasonably well and don't seem to have any serious cravings once they get past the initial hurdle.

But cutting out bread? That's a whole other ball game. A ball game many go in knowing they have a low chance of survival.

Fortunately though, if you're willing to get just a little bit creative, you can have that bread and still get to your target lean body fat level. 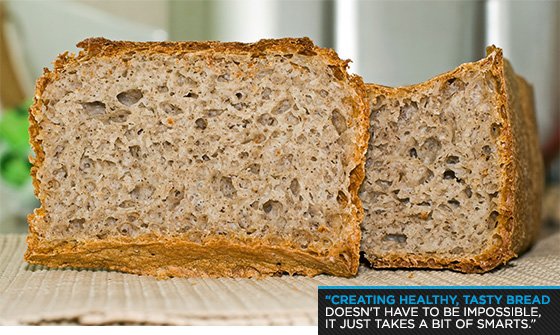 Creating healthy, tasty bread doesn't have to be impossible, it just takes a bit of smarts, a bit of time, and a bit of trial and error until you find the perfect combination of ingredients that will fit your diet and suit your taste buds at the same time.

Let's have a brief look at how to make healthy tasty bread so you can add this food back into your fat loss diet program.

One way to cut some of the fat out of any bread recipe you may be preparing is to cut out one or more of the whole eggs the recipe calls for and use some egg whites instead. This will boost the protein content of the bread, while reducing the overall calories you consume as well.

2. Use Gluten Flour Rather Than Regular

For some people, one of the primary reasons they can't have bread in their diet is because they have severe gluten insensitivities. If this happens to describe you, you may want to consider swapping in some gluten flour instead. This will still bake up very much like regular flour would, but will not cause nearly the same digestive upset and pain as a typical loaf of bread.

Gliadin and glutenin comprise about 80% of the protein contained in wheat seed. Insoluble in water, the proteins can be purified by washing away the associated starch. Gluten is an important source of nutritional protein, both in foods prepared directly from sources containing it, and as an additive to foods otherwise low in protein.

3. Grind Up Some Oats

Another option that you can use to reduce the total amount of flour that you have to use in your bread recipe and really boost up the overall nutritional content is to grind up some oats to add in. Since oatmeal is extremely high in dietary fiber, low in sugar, and provides an extremely slow-releasing source of carbohydrates, this really is an ideal option for creating bread with.

On a low-carb diet? If you are, you'd definitely think bread would be scratched off your list permanently—regardless of what you do.

Wrong again. If you plan properly, bread can be a part of a very low-carb diet again. The key thing that you'll want to do in this instance is replace all the regular flour called for in the recipe with ground flaxseed meal instead. This will also really boost up the overall fiber and healthy fat content of the bread recipe, so you'll improve the overall nutrition at the same time. 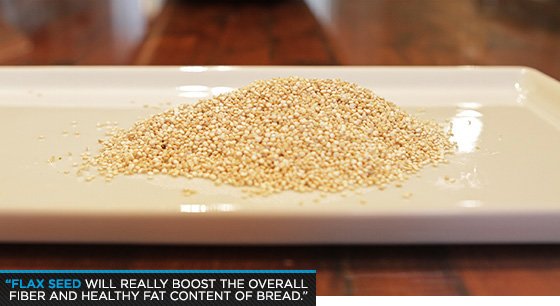 Just remember that since this bread will be a bit higher in healthy fats, this also means it's going to contain more calories as well. Be sure that you plan for this in your diet accordingly.

5. Use Stevia Rather Than Sugar

If you're preparing a bread recipe that call for some sugar, or it's a sweeter bread that you're making in the first place such as banana bread, consider replacing some of the sugar called for in the recipe with Stevia instead. This is a more natural form of sweetener than the others out there and will not contain all the calories that regular sugar would.

Just plan out how much you use accordingly as this tends to be an extremely concentrated source of sweetener.

Looking for a way to cut back on the overall fat content? Apart from swapping whole eggs with egg whites as we discussed above, another way you can reduce the fat is to remove some of the oil and use fruit purees instead.

Applesauce is by far the most common choice, however you can go with others as well. As an added bonus it will also provide you with a sweeter tasting bread, so if you're having it as your morning meal with oatmeal or fruit, it will fit right in.

Below are a couple of recipes for healthier versions of bread that you can consider. The first one is a low-carb variety for those following these variations of diets while the second is a more wholesome recipe that boosts the overall nutritional content.

So don't think that bread has to leave your diet forever if you want to stay healthy. With these quick tricks you can dramatically boost the overall nutrition it provides you and incorporate it back into your plan.