Annemarie suffered the loss of failed training, but when her diet and exercise finally matched up, she achieved the results of her dreams. See how she took the stage! 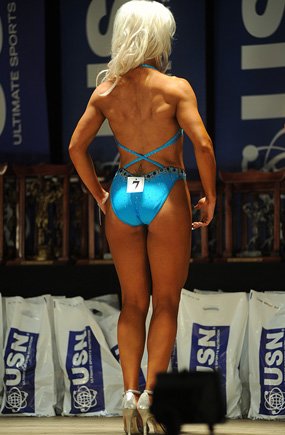 I used to be overweight as a child. I never competed in any sport, and I was always made fun of. Nine years ago I saw a Muscle Mania show on ESPN and got hooked.

I decided that one day, I also would like to stand on a stage and accomplish my dream of being a figure athlete. That thought never left my mind.

Immediately I joined the gym and lost 20 kilograms (44 pounds) within my first 3 months, using articles I found in magazines and on websites to guide and motivate me.

I trained for a few years after that, never being satisfied with my body and even lost interest at times, but luckily got back on track after a week or two.

I always bought magazines to inspire me and keep me motivated. That was still not enough, it did not satisfy my need. Then I met my fiancé, a bodybuilder, 6 years ago.

I used to go to shows with him, seeing all the girls made me envy their bodies, what they have and what they achieved.

In 2009 I tried to compete in my first show. I was so eager, but had a lack of knowledge and guidance because my fiancé felt that I was not ready yet. I set out to prove him wrong and end up with a weight loss of 10 kilograms (22 pounds), but only lost 3% body fat because I overtrained and my diet was incorrect. Disappointed, I set off trying again.

I enrolled in ISSA in order to learn more and follow my dream career. 2010 was a busy year with a new job at a local gym and long working hours. I also became sick and picked up 7 kilograms (15 pounds). I felt awful. I started off the beginning of 2011 and never looked back.

January 2011 I reached a turning point. I decided that this would be my year. I gained 7 kilograms (15 pounds) last year while being on medication and not being able to train. I am a personal trainer by profession, but my looks did not reflect that. I set out to get ready for a show in August, giving myself 8 months to shape up, add more muscle to my frame and loose those dreaded kilos of extra fat I've been carrying around.

I read so many articles online as well as in magazines and wasn't quite sure what to do. I bought a well-known publisher's e-book, but felt the foods were improper. 5 weeks before my show I realized I needed help or else I would fail again. My body fat was at 14% but my body still needed a lot of work. I felt like giving up, but reminded myself that by then I lost more than 10kg already, added muscle and dropped nearly 9% body fat. I wasn't going to give up now, no matter what. 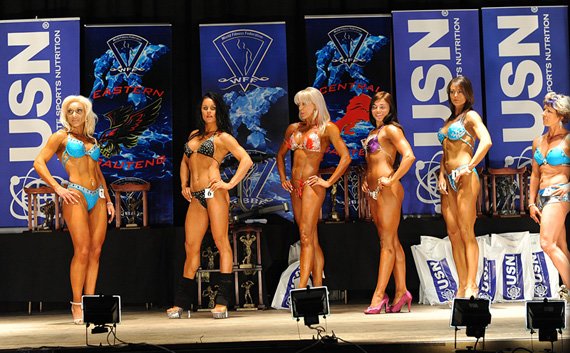 I contacted a friend who knows a coach that had a very good reputation among figure girls. He immediately put me on a Keto diet and I dropped weight faster than ever before in my life. My abs became rock hard, I've never seen that before in my life. I felt so proud of myself, the food was little and tasteless but I would stick to it because seeing myself daily in the mirror gave me the strength to carry on.

I worked hard, my driving force being to show others as well as myself that I can do it. The cardio killed me, i.e. 2 hours daily split into two sessions as well as 1-hour weight training session, but in the end it was all worthwhile.

While on the journey, one goes through times where one wants to give up. I even made lots of mistakes along the way, but I educated myself as much possible while learning along the way. It was a learning curve, but I'll never regret making mistakes. It taught me true value of life.

Never give up, you are worth it. If you put your mind to it, you can achieve anything your heart desires. Work hard, be committed. Patience is key, and if you fail, stand up and try again. Do not give up.

I motivate myself daily with these words from a very inspirational lady, Pauline Nordin:

"There's nothing more important for reaching your goals than your mental approach. Sometimes it's difficult to stay motivated, sometimes it's like you don't really want to keep going. For those times I use this reminder/prayer to help myself remember why and for what I commit to my rigorous exercise routine and diet plan.

I know it's tough to focus on making the right choices and not to fool myself that I'm just going to eat that crap only one last time. I need to let the desire for it go away in order to reach my goal. The only way for me to do that is to have the will, patience and perseverance. Eating the crap will never make me happy in the long run. Feeling like a million dollars is what will make me satisfied forever.

The temptations are temporary, but my physique lasts eternally. Every failure drives my goal further away from me. When I make the right choices, the road to success shortens. I choose, I decide.

I win when I turn down the devastating desire. Desire shall not control me. I'm the one in charge of myself. The more times I succeed to stay focused on the right things, I become stronger and the more easier it gets to keep going. I want a ripped, muscular body. I need to be determined for that to happen.

I will not let all the hard work so far be in vain by fall victim for the temptation. Everything will be easier eventually. I just need to live through this all. Remember who I want to be, who I need to be to feel the very best. I will succeed because I decide what takes place."