Jen was fooled by misleading food packaging and steadily added weight for several years. At age 31, she made a stand, lost 11 percent body fat, and competed. You can too!

I've been lifting weights and playing sports since age 15. After years of eating what I thought was healthy food, I was several pounds overweight and determined to get in the best shape of my life.

To combat my weight, I signed up for a bikini competition. I had no idea that it would be the hardest yet most rewarding weeks of my life.

Before my transformation, I ate foods that I thought were healthy, but was actually junk food in disguise. I have many food allergies, so I often turned to pre-packaged, gluten-free products to snack on. I thought they were healthy because I purchased them at the local health food store.

I wanted to learn how to use food as fuel to rev my metabolism. Ultimately, I wanted to use what I learned during competition prep to balance my life and maintain the weight I lost.

After summer was over at age 31, I started what I thought would be a solo competition prep, but when no weight or body fat came off, I enlisted the help of coach and NPC competitor, Shaunna Marie Fitness. At that point, I was eight weeks out and terrified to step on stage. By incorporating a combination of weights, cardio, Gracie Barra Brazilian Jiu Jitsu, and balanced meals, I started to lose weight quickly.

I won't lie and say it was easy. There were days when I didn't feel like going to the gym and wondered why I was doing it. I had an amazing support system, which really helped, but I also used transformation stories as motivation. It was more mentally challenging than anything, but I had to remember how far I came.

My transformation began on September 6, 2013, and lasted until November 2, 2013, the day of my competition. It's now several weeks after my comp and I'm still maintaining at 118 pounds. Most competitors train for 12 weeks before a competition, but I only had 8 weeks. In that short time, I changed my body and mind.

I plan all of my meals through the week and occasionally have a treat. If I could give one piece of advice, it would be to prep your meals. 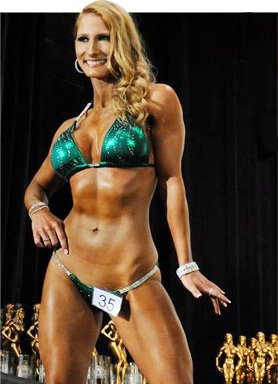 "Trust the process. Your mind plays tricks on you, but you can't listen."

I loved the training aspect of competition prep and thought the diet would be a breeze since I have many allergies already, but I was wrong. It's a mental challenge and I can see how people have an issue sticking to a plan.

I began craving foods that I would otherwise never touch. I had to tell myself repeatedly that I can't eat foods that aren't conducive to my goals.

As my body changed, I didn't mind not having treats. It was worth it.

Since earning my SNBF pro card in November, I've taken a few months to make improvements.

I'll step on stage to compete in my first pro show in June 2014.

Trust the process. Your mind plays tricks on you, but you can't listen. Remember why you're doing this and push yourself. Stay strong and be around likeminded people.

I purchased a majority of my supplements from Bodybuilding.com. I was shocked when I realized that Bodybuilding.com carries vegan protein and I stocked up immediately. The shipping is insanely quick.