Simple yet effective, Alicia Harrisâ?? meal plan helps her crush tough workouts and lean out for competitions. Learn more about her clean eats and occasional treats!

Alicia Harris believes in clean nutrition and consistent meal timing. She doesn't like to count calories, so she keeps her nutrition simple. Everyone has different nutritional needs, but Alicia's diet is a great foundation for your own regimen. Follow her plan!

Alicia's approach to nutrition is more straightforward than you might expect, and can easily be summarized: "I just make sure I get a good amount of protein and carbs in each meal. Usually, my plate has more protein on it than carbs."

As for meal timing, Alicia eats about five times per day: "Everybody's schedule is different, and nobody eats the exact same amount of food. Just make sure you have something to chew every two or three hours," she advises.

Simplicity is usually the best policy, and Alicia's meal plan is pretty simple. "I eat a lot of chicken and lean fish like tilapia, halibut, and tuna for my protein. My fats come from almonds, peanut butter, and avocados, and I get my carbs from sweet potatoes, rice, oatmeal, and of course, vegetables."

Like everybody, Alicia likes eating out and enjoying treats. "I like M&Ms," says Alicia. "I eat cake, cupcakes, and cookies. I just make sure to minimize the amount that I eat." So, instead of chomping three bags of M&Ms, she'll eat just a few. Alicia also tries to eat her treats earlier in the day so she can work them off during her afternoon workouts. "I just try to watch what I eat and I don't eat snacks every day. But, if I want one, I'll have one," she admits.

She has a similar attitude toward eating and restaurants. "If you're going to a restaurant, you're paying for your food; you can order whatever you want," she says. "There's no reason to feel embarrassed about asking for some adjustments."

Sometimes, it takes a long time for Alicia to order because she has many special requests, but she doesn't let it bother her. "Restaurants always have chicken and they always have vegetables and salad. If you don't want something cooked in vegetable oil, then ask for it to be prepared another way." 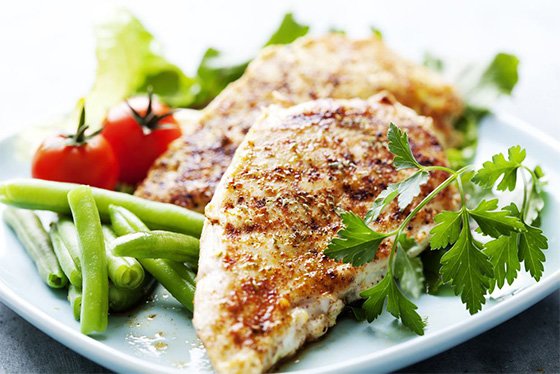 "If you're going to a restaurant, you're paying for your food; you can order whatever you want."

If she's not in the last couple of weeks before a show, Alicia enjoys eating out. "They don't put that much crap in the food," she says. "It's not going to kill you." If you're a competitive physique athlete, your meals have to support your goals, but balance is always important.

"I hope this doesn't get me in trouble, but I do drink alcohol," Alicia says. She might love sugary daiquiris and margaritas, but she only has them every so often because she knows she can make better choices. "If I do need something, I like to do a shot because it has fewer calories. I'm not a drunkard, so I don't drink a lot, but a shot or two is a better choice than a margarita or daiquiri."

In her refreshingly candid way, Alicia recognizes that most of life occurs outside the gym and off the stage. "You can order what you want. You have to enjoy life; you can't just live in a box."