Antoine Vaillant's physique is earning fans worldwide, but how he built it is no secret: Beef, rice, tuna, and lots of it! Eat like him and grow like this Canadian beast for just dollars a day.

Pro bodybuilders are pros because they're competitive. It shows in how they train, eat, pose, and even how they shop. After seeing Animal's popular and pragmatic shopping series "Big on a Budget," where Evan Centopani and Frank McGrath showed the wonders that could be wrought with $50 and $100, Universal athlete Antoine Vaillant wanted in on the fun.

Drawing upon his experiences as a young, aspiring lifter in his native Montreal, this up-and-coming IFBB pro entered an old-school New Jersey grocery store with $70 (U.S.) dollars and one objective: design an effective diet plan for muscle growth that would last an entire week.

As he showed in the premiere episode of "Size for Seventy," it was almost too easy. Watch and learn.

IT ALL BEGINS WITH BEEF

On a budget this tight, it's important to start with the highest priority—the food that you know will give you results, and that you actually like eating enough to make it the centerpiece of your day.

For Antoine, that is ground beef. It's easy to measure and prepare, doesn't leave any food wasted, and can always be had for a steal. Three family packs ate up over half of his budget, but Antoine didn't blink. Over the decade he has spent building his world-class physique, he has learned how to run the numbers. 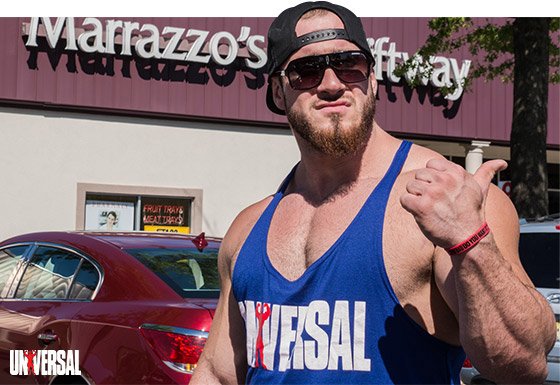 Over the decade Antoine Vaillant has spent building his world-class physique, he has learned how to run the numbers.

If you imagine Antoine choking down his beef unseasoned like some kind of immense muscular monk, think again. Just like Frank McGrath insisted on including his "tasty-taste" chocolate cookies in "Huge for A Hundred," Antoine needs his spicey-spice. "Who's going to eat bland beef? Maybe Roman [Fritz, another Animal athlete]. I won't," insists Antoine.

"Well, I would if I really had to, but when you have the choice, the answer is crystal clear: Use Crystal hot sauce for your beef."

Put a lid on it. We've all had a dish of ground beef at some point that had the texture of gravel. The answer to this dilemma is simplicity itself: "Put a pan over it too keep the moisture in," Antoine says. Don't fret the extra fat that stays in. This diet is lean enough to allow space for some saturated fats.

Man can't live on beef alone—unfortunately—so Antoine diversifies his protein lineup with two bodybuilding staples: chunk light tuna and eggs. "Tuna is a great add-on to any diet, because it's very lean, very simple," he explains. "Just open up the can and eat it. You can put it in your lunch box if you're a student. Put it in a gym bag, and it's made of metal, so it won't spill. Very useful and practical in all kinds of situations." 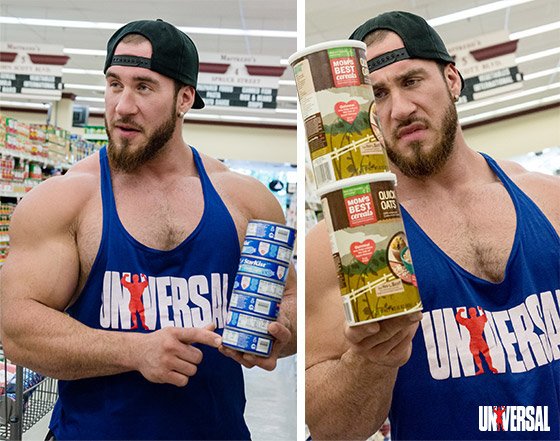 "Tuna is a great add-on to any diet, because it's very lean, very simple," Vaillant explains. "Just open up the can and eat it."

Be a soy boy. The same hot sauce that went on the beef can make two cans of tuna go down easily. But Antoine favors a different flavor for his eggs: soy sauce. He adds it while they're cooking, a trick he says he learned from an old video starring IFBB Pro Chris "The Hawaiian Hurricane" Faildo.

Every elite bodybuilder has a clean meal that is near and dear to their heart, and that has helped them make the long transition from rank amateur to pro contender. For Antoine, that meal is ground beef and rice. Long-grain rice is his carb of choice, and there was never a doubt that it would be a major part of his shopping trip.

"Rice is my favorite carb ever for digestion, building mass, and cutting," he says. "And I really like the beef and rice mix. I've been using that for a long time."

Oil up. We all know that olive oil is a healthy fat, but we waste it by adding it prior to cooking, where it gets burned off or poured down the drain. Antoine adds a teaspoon of olive oil to his rice after cooking, allowing him to receive its full nutritional benefits and a fantastic flavor boost. "I use it so much, it's not a virgin anymore," he says. 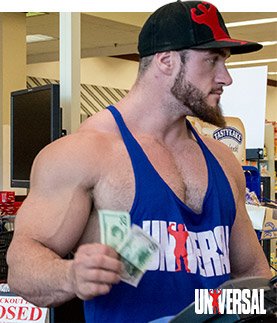 "I want my oats in the morning, and I want them quick," Antoine says. The answer is obvious: quick oats. Two tubs lasted the week and then some for just a couple of bucks. But he doesn't want just oats—nobody in their right mind does.

So Antoine saved room in his budget for cinnamon and bananas, two ingredients that can singlehandedly transform oats from awful to decadent. "It's almost like a dessert," he says. "And you can put as much cinnamon as you want in anything."

Go old-school. When it comes to oatmeal, texture matters. That's why Antoine avoids the microwave and boils his water in a tea kettle. "It's very hit and miss," he says of the microwave. "Sometimes it ends up too chunky or too dry. But with [the tea kettle], I just add it to the quick oats, and it's just the perfect amount every time. Mix it up, and it's like hot cereal. Actually, it is hot cereal."

Antoine breezed through the checkout line with money to spare—enough to buy a "knee dance" in Montreal's finest gentleman's clubs. But all posing and joking aside, his message is both serious and useful.

You can live the lifestyle of an elite physique craftsman at any price. It's not that hard, and the most important steps to make it work are simple ones. Do the math, get the spices you like, and make small additions that make a huge difference in taste and texture. 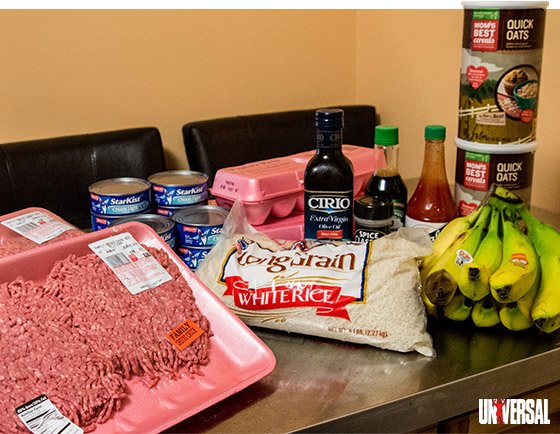 Follow Antoine's lead, and your nutrition will be so quick and easy, you'll have time left over for a pose-down in aisle five. Stringer tanks are optional. 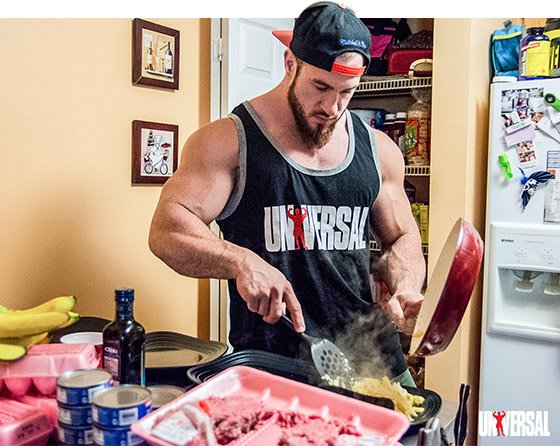