The offseason diet of your dreams is just $100 away. Ride along with Frank ''Wrath'' McGrath and eat like him if you dare!

Marrazzo's Thriftway in Trenton, New Jersey, shudders when Frank ''Wrath'' McGrath pushes his empty cart through the automated doors. And not just because he's huge—although those 260-odd pounds of action hero vascularity definitely cast an imposing shadow. No, this store fears Wrath because of his ability to utterly humiliate their profit margin, wringing every last cent's worth of muscle-building value out of a greenback.

Last year, McGrath showed us the wonders that could be wrought with a $50 bill in Animal's "Big on a Budget Challenge" video. Chicken and broccoli? Fuhgettaboutit. This offseason extravaganza was beef-heavy and even had room for dessert.

Now Wrath is back to see what he can do with double the dough, and he doesn't disappoint. This is enough calories to turn even the hardest training into rock-hard gains. Uncinch those sweat pants and ride along if you dare!

Wrath is made of meat. OK, we all are, but he's made of more of it. And you know why? Because he eats more of it. That's why, after a momentary stop for a bag of apples, he devoted around three-quarters of his remaining Benjamin to protein sources, including:

What, you were expecting filet mignon? Wrath built his IFBB pro physique by buying cuts that give the most beef for the buck, and a roast definitely fits the bill. 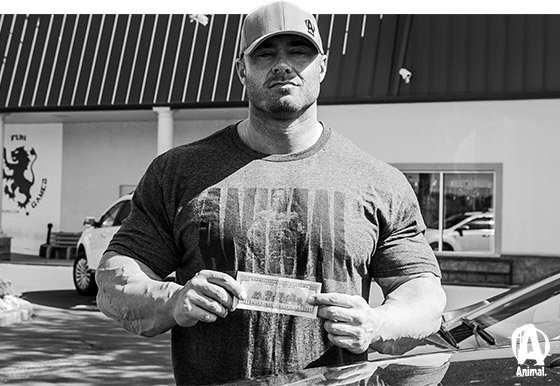 "Just stick it into the oven and cut it up into individual meals," he says. It's pretty tender, and something a little different." A roast is easy to prepare to taste—Wrath's preference is bloody—and it needs nothing more than salt, pepper, and garlic to be ready to go. If you've got a couple extra bucks, toss some onions in the pan alongside it.

Surprised to see the old-school bodybuilding staple of milk on that list? Don't be. You might think that the elite mass monsters have all evolved to the point where they only eat dairy in powdered form, but Wrath is still a fan. It's no mystery why. In terms of taste, protein content, and overall nutrition—but especially in taste—a post-workout shake with milk defeats a post-workout shake with water every time. It's that simple.

To take it to the next level, add some peanut butter to that shake and a banana on the side. Worried about those calories? Train harder. 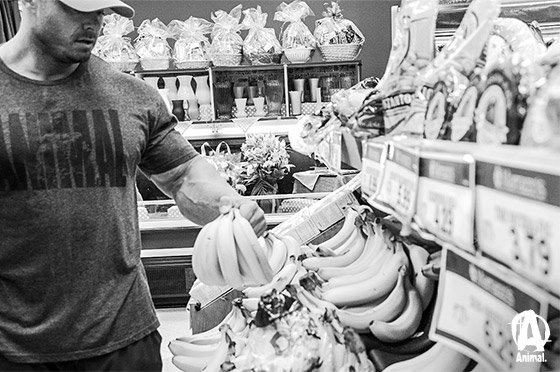 A vet like Wrath knows that it's actually more important to shop for value when you've got money.

Load up the Pantry

When you're feeling flush, it can be tempting to steer right past what's on sale and go for smaller amounts of big-ticket, name-brand grub. Not so fast, young pup. A vet like Wrath knows that it's actually more important to shop for value when you've got money. This is your opportunity to stock up and get ahead of the curve, rather than just getting by.

"You need to load up every time you see a good deal," Wrath commands, and he practices what he preaches. Almost every time he stopped the cart in Marrazzo's, he bought more than he needed. He chose a bag of apples rather than count out and pay for individuals. Ditto for bread, peanut butter, oatmeal, and potatoes. Seeing that high-quality omega-3 eggs were on sale, he rounded up to the nearest dozen and added an extra whole egg to his nightly 16 egg-white snack.

The lesson for you: food quality matters, but quantity builds mass. Get your calories.

You say you're overtrained? Wrath says you're just undernourished. And not just in the physical sense. For your diet to truly sustain you, it's necessary for you to love at least some of what you eat. That's the secret to cramming in the macros you need to grow.

This is why, once in his $100 week, Wrath swapped out his 16 egg whites for "Newfie style" baked beans and (gasp!) buttered toast. "Old school beans—it's one of my secrets," he says. "It's still protein, it's still carbs, and it tastes awesome. It's something I've been doing since I was a kid, and I still do it."

This is also why, rather than insult his perfectly cooked roast beef by pairing it with bland, unseasoned potatoes, he made mashers with milk and butter. "It's the offseason. Make that shit taste good," he says.

Smell something else cooking in Wrath's kitchen? That's right, it's cookies. He'll have six of them with a glass of milk one night during the week, and he doesn't care what you think about it. "I'm human," he says. "We made sure we got everything else out of the way first. Bake those cookies. Gotta live." 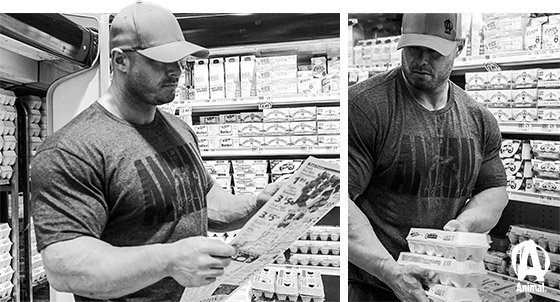 Food quality matters, but quantity builds mass. Get your calories.

Can you eat this much?

The assignment for "Huge on a Hundred" was simple: Use the "Big on a Budget" $50 meal plan as a starting point, and add better food, more meals, and more variety. Wrath scored big on all three counts, with a couple of bucks to spare.

"We used everything we had, and got everything and more," Wrath says. "It's a hell of a lot of food. This is an offseason diet. It's pretty clean meals, but you've also got your tasty-taste."

If you're like most lifters, you're eager to answer the question of whether you can train like the pros. But a more appropriate challenge is: Can you eat like the pros? Here's your chance. Get out that big bill and start chewing.

One night a week, swap out with

What's better than an elite bodybuilder explaining his chest routine? How about two IFBB pros training together and discussing their pec-growth secrets!

Jesse Norris is breaking world records at an age when other young men are just struggling to find their way. This 19-year-old is almost too strong.