To understand the complexities and effectiveness of the supplement products in today’s pre-workout category, you need to understand where it all started: NO Boosters

Nitric oxide may be a gas, but its popularity as a supplement has remained solid. Just 10 years ago, the term nitric oxide was relatively unknown in gyms and supplement stores alike. The first NO boosters contained a single amino acid. Today they are often made up of stacks of very advanced ingredients and technical delivery systems. Nearly overnight, this supplement has gone from unknown to muscle-building star. No other supplement has undergone such an expansive evolution over such a short period of time. How did that happen? Here's our account of the efforts that turned NO boosters into the most cutting-edge supplements on the market today.

Born in the Lab

Like most supplements, NO boosters got their start in the lab. Yet unlike most supplements, the actual nitric oxide molecule garnered a Nobel Prize in 1998 for the scientists who discovered it and its function in 1986. After its discovery, word quickly spread of NO's ability to relax blood vessels and therefore increase blood flow. This not only prompted an avalanche of medical research on NO, but it also caught the attention of supplement scientists. One company stands out in this regard: Medical Research Institute (MRI) immediately understood the impact NO could have on muscle growth. Increasing blood flow to muscles during workouts creates a bigger muscle pump and allows for delivery of more nutrients and oxygen to the muscles for greater energy during contractions.

In 1997, MRI created the first-ever NO booster called NO2. Back then, NO2 was essentially a bottle of the amino acid arginine. But as simple as it sounds, it was very effective because arginine is readily converted to NO in the body. However, since regular L-arginine tends to be poorly absorbed by the body, MRI used a form of arginine known as L-arginine alpha-ketoglutarate (arginine AKG), which is basically arginine with an alpha-ketoglutarate molecule attached to it. The AKG enhances the absorption of arginine so the body gets more arginine with each dose. And the more arginine the body absorbs, the more NO the body can produce-to a degree. 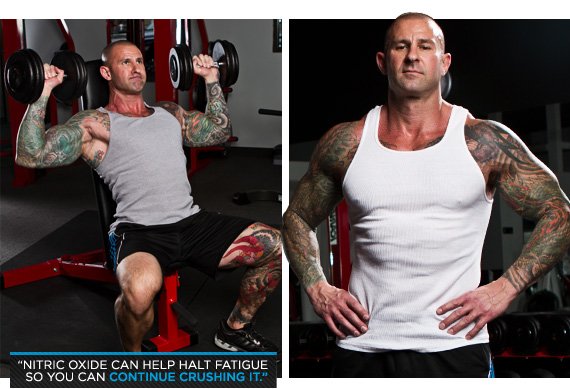 Arginine AKG became a huge hit. Guys loved the bigger pump they got in the gym and the ability to train with more intensity. According to Vince Andrich, president of Vandrich Performance Nutrition Inc. and author (Sports Supplement Review, Mile High Publishing), "NO boosting was an idea that went viral, and this caused every major sports nutrition brand, and even most small up-and-comers, to send their science, research, product development, and marketing teams out to build a better NO supplement." Many supplement manufacturers simply followed MRI's lead and produced their own version of NO2, most of which contained arginine AKG or other forms of arginine.

Other supplement manufacturers soon realized that, as effective as arginine was for boosting NO levels, there was a limit to how much arginine the body can convert to NO. The limiting factor in this conversion is the enzyme nitric-oxide synthase (NOS). NOS is the enzyme that catalyzes the conversion of arginine into NO. Increasing the activity of this enzyme increases the amount of arginine that gets converted into NO, thereby producing greater amounts of NO. Several ingredients have been found to increase the activity of NOS. These include:

Pycnogenol - This trademarked antioxidant flavonoid extracted from the bark of the French maritime pine tree provides antioxidant health benefits in addition to boosting NO production by increasing the activity of NOS.

American Ginseng - Known formally as Panax quinquefolius, this form of ginseng contains active components called ginsenosides, which have been found to increase the activity of NOS.

Gynostemma Pentaphyllum - Also known as Jiaogulan, this herb is often referred to as southern ginseng because it grows mainly in south-central China and has a chemical composition and function similar to Asian ginseng. The active components in Jiaogulan are called gypenosides, which act similarly to the ginsenosides in ginseng to increase activity of NOS.

Histidine - This amino acid combines with beta-alanine to form carnosine, which is critical for muscle strength and endurance. It's also a precursor to histamine, which is involved in the body's immune response. Histamine also increases activity of nitric-oxide synthase.

With the discovery of these "helpers," supplement manufacturers started stacking them to produce much more powerful NO boosters. This helped the category to continue to grow increasingly effective and popular. And sales of NO boosters continued to soar.

In the early days of NO boosters, most products focused simply on boosting NO levels. The early 2000s marked the dawn of a new age. As Andrich says, "This pressure to 'one-up' the last innovation eventually brought us N.O.-Xplode by BSN, which placed NO supplements at the top of their own category - preworkout. N.O.-Xplode was the first NO product to combine stimulants and other performance-enhancing compounds with NO-boosting ingredients."

According to BSN's Brand Development Manager, Eric Hart, "Prior to the introduction of complete pre-training formulas like N.O.-Xplode, consumers had to rely solely on stimulants to get them through an intense workout, loading up on stacks that included caffeine, ephedrine, and aspirin. With this in mind, in 2004, BSN introduced N.O.-Xplode. The category of NO boosters was there and growing, but it still wasn't synonymous with pre-training. Additionally, there were no all-in-one preworkout formulas-ones that supplied NO boosters for pumps, creatine for strength gains, caffeine for energy and electrolytes for hydration. N.O.-Xplode was born out of a need to fulfill all elements necessary to have a growth-stimulating workout: energy, mental focus, work intensity (endurance, strength, and hydration), and pumps."

One way the category as a whole continues to evolve is by moving away from arginine and using other ingredients that raise NO levels, and MHP is one company doing just that. In 2010, MHP launched NO Bomb. Gerard Dente, president of MHP, says, "Arginine and arginine AKG have since been the ingredients of choice and are used in most pre-workout and nitric-oxide supplements today. However, another new interesting ingredient has since arisen, GlycoCarn (glycine proponyl-L-carnitine-GPLC), and MHP is at the forefront with NO Bomb.

The Future of NO

Just as NO boosters have evolved over the past 13 years, they will continue to evolve, becoming even more eff ective than they are now. Although it's impossible to say exactly what discoveries will be made in the world of NO boosting, Andrich and Dente have an inkling. "While the NO booster/pre-workout category has come a long way to improve muscle performance, the products of the future will likely consider adding compounds that reduce muscle-protein breakdown," Andrich says.

"A dual-action NO booster/ pre-workout with added anticatabolic protection will be the next natural progression, since so far the goal has been to increase performance by pulling out all the stops (and maxing out stimulants). But the name of the game is more muscle and less fat, and you can't do that eff ectively by driving only the performance end of the muscle-building equation. In the future, a supplement that allows you to hold on to every ounce of muscle you have been able to build by using a potent NO booster/pre-workout supplement will make the category even more important to strength and power athletes."