Clayton South, SPN (ISSA), is a recognized expert in the bodybuilding / fitness industry with over 150 bodybuilding, fitness and nutrition publications to his credit.

What Is It?
And Where Does It Come From? 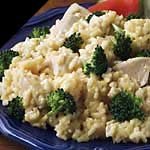 Gamma Oryzanol is a mixture of plant sterols and ferulic acid esters that are derived from barley, corn and rice.

The majority of gamma oryzanol used in nutritional supplements is harvested in Japan.

What Does It Do?
And What Scientific Studies Give Evidence To Support This?

As a potent source of ferulic acid esters and other compounds, gamma oryzanol has been used to treat the symptoms of menopause. Japanese physicians first began using gamma oryzanol as a menopause medicine in the early 1960's. It proved remarkably effective.

Gamma Oryzanol stimulates the release of endorphins - the body's so-called "feel good" hormones. These hormones stimulate the pleasure centers of the brain, and this stimulation results in an elevation of mood. While not as effective as some prescription pharmaceuticals used to treat depression, gamma oryzanol can significantly improve mood.

Gamma Oryzanol has been proven to have very strong antioxidant activity. In fact, one study showed that it was up to ten times stronger than vitamin E for scavenging free radicals from the body and preventing tissue damage that results from free radical action.1

This finding is significant because oxidative stress is a marker of ageing and can lead to various forms of cancer (resulting from DNA damage and damaged cell proliferation). By scavenging for free radicals, gamma oryzanol may slow the ageing process and prevent the onset of cancers.

Hypertension (high blood pressure) is known as "the silent killer" and is correlated with high LDL (low density lipoprotein - the so-called "bad" cholesterol) levels. Increased rates of obesity in industrialized countries are leading to an increase in the diagnosed cases of hypertension and a reduction in quality of life.

Gamma Oryzanol has for years been used as a treatment for high cholesterol levels, and science shows that it may work at reducing blood pressure by increasing HDL (high density lipoprotein - the so-called "good" cholesterol) levels.2

An increase in HDL levels is usually, but not always, correlated with a lowering of LDL levels and a reduction in blood pressure. Researchers believe that gamma oryzanol may reduce LDL levels.3

As a nutritional supplement, gamma oryzanol has become popular among athletes and bodybuilders because it may boost strength, increase muscle gain4, reduce body fat, speed recovery and reduce post-exercise soreness. Elevated testosterone levels are thought to be responsible for these effects.5

Who Needs It?
And What Are Some Symptoms Of Deficiency?

Gamma Oryzanol is not an essential nutrient and no daily requirement (RDA) exists. No symptoms of deficiency exist.

Healthy adults can benefit from supplementing with gamma oryzanol (see above).

How Much Should Be Taken?
And Are There Any Side Effects?

Side effects can include dry mouth, irritability and a reduction of thyroid stimulating hormone (TSH).

Gamma Oryzanol is not known to be contraindicated with any medication or nutritional supplement.

Do not use if you are pregnant or nursing.