The Importance Of Slow And Fast Dietary Proteins

The speed of absorption of dietary amino acids varies according to the type of ingested dietary protein... Learn just how important slow and fast proteins, taken at the appropriate time, can affect your ability to put on lean mass.

This makes up the basis for the glycemic index of not only foods but whole meals since the presence of protein and fat with the carbohydrates usually slows down the absorption over the whole digestive process. Fast and slow carbohydrates have different metabolic effects on the hormones and on various metabolic processes.

Now we also have slow (whey and soy) and fast (casein) dietary proteins.

It's been shown that the postprandial amino acid levels differ a lot depending on the mode of administration of a dietary protein; a single protein meal results in an acute but transient peak of amino acids whereas the same amount of the same protein given in a continuous manner, which mimics a slow absorption, induces a smaller but prolonged increase.

Since amino acids are potent modulators of protein synthesis, breakdown, and oxidation, different patterns of postprandial aminoacidemia (the level of amino acids in the blood) might well result in different postprandial protein kinetics and gain. Therefore, the speed of absorption by the gut of amino acids derived from dietary proteins will have different affects on whole body protein synthesis, breakdown, and oxidation, which in turn control protein deposition.

For example, one study looked at both casein and whey protein absorption and the subsequent metabolic effects.iii In this study two labeled milk proteins, casein (CAS) and whey protein (WP), of different physicochemical properties were ingested as one single meal by healthy adults and postprandial whole body leucine kinetics were assessed.

WP induced a dramatic but short increase of plasma amino acids. CAS induced a prolonged plateau of moderate hyperaminoacidemia, probably because of a slow gastric emptying. Whole body protein breakdown was inhibited by 34% after CAS ingestion but not after WP ingestion. Postprandial protein synthesis was stimulated by 68% with the WP meal and to a lesser extent (+31%) with the CAS meal.

Under the conditions of this study, i.e., a single protein meal with no energy added, two dietary proteins were shown to have different metabolic fates and uses. After WP ingestion, the plasma appearance of dietary amino acids is fast, high, and transient.

This amino acid pattern is associated with an increased protein synthesis and oxidation and no change in protein breakdown. By contrast, the plasma appearance of dietary amino acids after a CAS meal is slower, lower, and prolonged with a different whole body metabolic response: protein synthesis slightly increases, oxidation is moderately stimulated, but protein breakdown is markedly inhibited.

This study demonstrates that dietary amino acid absorption is faster with WP than with CAS. It is very likely that a slower gastric emptying was mostly responsible for the slower appearance of amino acids into the plasma.

Indeed, CAS clots into the stomach whereas WP is rapidly emptied from the stomach into the duodenum. The results or the study demonstrate that amino acids derived from casein are indeed slowly released from the gut and that slow and fast proteins differently modulate postprandial changes of whole body protein synthesis, breakdown, oxidation, and deposition.

In conclusion, the study demonstrated that the speed of amino acid absorption after protein ingestion has a major impact on the postprandial metabolic response to a single protein meal. The slowly absorbed CAS promotes postprandial protein deposition by an inhibition of protein breakdown without excessive increase in amino acid concentration.

By contrast, a fast dietary protein stimulates protein synthesis but also oxidation. This impact of amino acid absorption speed on protein metabolism is true when proteins are given alone, but as for carbohydrate, this might be blunted in more complex meals that could affect gastric emptying (lipids) and/or insulin response (carbohydrate).

In light of the fact that both hyperaminoacidemiaiv,v,vi and resistance exercisevii,viii,ix,x,xi independently stimulate muscle protein synthesis, a recent study (by Wilkinson et al. 2007) looked at how different proteins differ in their ability to support muscle protein accretion.xii

The study investigated the effect of oral ingestion of either fluid nonfat milk or an isonitrogenous and isoenergetic macronutrient-matched soy-protein beverage on whole-body and muscle protein turnover after an acute bout of resistance exercise in trained men.

The authors hypothesized that the ingestion of milk protein would stimulate muscle anabolism to a greater degree than would the ingestion of soy protein, because of the differences in postprandial aminoacidemia (compared whey against casein).

In this study arterial-venous amino acid balance and muscle fractional synthesis rates were measured in young men who consumed fluid milk or a soy-protein beverage in a crossover design after a bout of resistance exercise.

The primary finding of the current study was that intact dietary proteins, as against say portions of intact proteins such as concentrates or isolates of whey, soy or casein, can support an anabolic environment for muscle protein accretion.

Two other studies done to date found that the ingestion of whole proteins after resistance exercise can support positive muscle protein balance.xiii,xiv However this study was the first to show that the source of intact dietary protein (i.e., milk compared with soy) is important for determining the degree of post exercise anabolism.

The study (by Wilkinson et al. 2007) also found a significantly greater uptake of amino acids across the leg and a greater rate of muscle protein synthesis in the 3 h after exercise with the milk-protein consumption as compared to soy-protein ingestion. Thus milk protein promoted a more sustained net positive protein balance after resistance exercise than did soy protein.

Part of the explanation for this lack of increase is that the test meals consumed by participants in this study had 30% of total energy from fat, which would likely have slowed digestion and, thus, the rate appearance of amino acids into general circulation. As well, the dose of protein used (7.5 g indispensable amino acids) did not stimulate amino acid oxidation.

The authors of this study (by Wilkinson et al. 2007) proposed that the digestion rate and, therefore, the ensuing hyperaminoacidemia that differed between the milk and soy groups after exercise is what affected the net uptake of amino acids in the exercised leg.

However, regardless of their conclusions, because there are variations between the proteins, it's still possible that the differences in amino acid composition between the two proteins had some effect on protein accretion. For example, the analysis of the proteins in this study found that the content of methionine in the soy protein (1.4%) was lower than that in milk protein (2.6%). 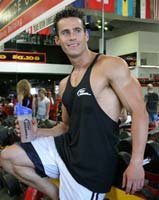 Click To Enlarge.
This Study Suggested That The Digestion Rate
Affects The Uptake Of Amino Acids.

A recent study looking at the effects of protein supplementation on body composition, muscular strength, muscular endurance, and anaerobic capacity during 10 weeks of resistance training.xix

Thirty-six resistance-trained males were split into three groups and followed a 4 days-per-week split body part resistance training program for 10 weeks. Protein supplements were randomly assigned, prior to the beginning of the exercise program.

In this study, the combination of whey and casein protein promoted the greatest increases in fat-free mass after 10 weeks of heavy resistance training.

My original reason for formulating Myosin Protein was to produce an effective night time protein; one that not only decreases muscle catabolism that occurs when we sleep, but also increases protein synthesis and muscle mass, while at the same time burning off body fat.

On the other hand, while it's the best nighttime protein available, the same features that make it such an exceptional nighttime protein also make it the best daytime protein on the market, since unlike all the other proteins out there, this product covers you and your protein needs over the long term instead of just a few hours.

This protein, with its combination of fast and slow proteins and peptides, is specially engineered to provide several anabolic amino acid peak bursts that result in an immediate and several intermediate marked increases in serum amino acids and subsequently protein synthesis.

A long term steady increase in serum amino acid levels that lasts for several hours and has been shown to have marked anticatabolic effects.

As we've seen, although these various proteins are mixed together, the body treats the mix of proteins as if each protein was taken separately. Thus these proteins, even when taken together, maintain their different (fast, intermediate and slow) absorption rates. (Boirie Y, et al 1997).

The above product contains a variety of the highest quality protein powder to make use of the special characteristics of each and thus enhancing their overall effect while at the same time eliminating their relative disadvantages. Because of the gentle processes used to isolate the various proteins, the formula maintains the beneficial immune, hormonal and other effects of the undenatured whey, casein, milk (containing colostrum), egg and soy proteins.

The combination of whey, casein, milk, egg and soy proteins provides an optimal amino acid array that maximizes the anabolic effects of dietary proteins. For example, while whey protein increases protein synthesis better than casein, it is not as good at preventing muscle catabolism.

Also, during low calorie dieting, soy has been shown to be more effective than casein in reducing muscle catabolism. As well, soy isolates, which contain none of the questionable phytoestrogens found in the less expensive soy proteins, can increase both TSH and thyroid hormone levels and thus increase both the metabolic rate and fat oxidation.

Since this protein product was engineered to increase protein synthesis with fast and intermittent spikes of blood amino acids, and to decrease protein/muscle breakdown with a sustained low-level increase in blood amino acids, it's ideal as a nighttime protein, and results in marked anabolic and anticatabolic effects, especially when used in combination with GHboost and TestoBoost (all three make up my NitAbol combo). The use of NitAbol truly allows you to build muscle and lose body fat while you sleep.

The bottom line is that Myosin Protein Complex is the most advanced, synergistic blend of the highest quality proteins, peptides and amino acids on the market today, bar none. It contains an optimized amino acid mix that maximizes protein synthesis and muscle mass, decreases muscle breakdown and increases fat oxidation. As well, this product provides your body with an increased immune response to combat overtraining and maximize the anabolic and fat burning effects of exercise.

Myosin Protein, although a superior night time and day time protein, is also perfect for day time use. For example, for those looking to lose body fat while at the same time maintaining or even increasing body fat, it can be taken within an hour of training and then continued every three to four hours thereafter, which along with keeping carb levels low, will extend the anabolic and fat burning effects of exercise.