The rise of bodybuilding causes comic book heroes to feel a lot like that skinny kid who got sand kicked in his face ... Here’s one hero, who some consider a freak of nature, that took it to heart. Check out how he trains ... and eats!

For years and year's bodybuilders all over the world have aspired to look like the comic book superheroes, with bulging striated muscle and illuminating vascularity.

Many of these athletes have succeeded and produced some outstanding physiques, such as Shawn Ray, Flex Wheeler and Bob Paris, others have produced some of the more freaky muscled physiques but won their fair share of physique contests, such as Markus Ruhl, Jean Pierre Fux, and even Mr. Olympia himself Dorian Yates, who by the way also had a superheroesque alias ... The Shadow.

Even as far back as the days when the legendary Steve Reeves played the role of Hercules on the silver screen; the fascination with superhero style muscles has always had an awe inspiring effect on the general public.

Down through the years as the rise in popularity in the sport of bodybuilding became more and more mainstream. The awe inspired effect was wearing thin as the competitive bodybuilder was becoming bigger, more ripped and more vascular, making some of the comic book heroes feel a lot like that skinny kid who got sand kicked in his face in all those Charles Atlas adverts.

Many of these superheroes now suffering from inferiority complexes because of the IFBB's finest decided it was time to take a note, stand up and be counted, and no longer have sand kicked in their faces.

One of those who took this whole thing to heart was none other than Marvel Comic's very own Bruce Banner (The Hulk's alter ego). His much hyped arrival to the big screen some years back was a bit of a let down.

His computer enhanced physique is what he blames, so to combat his frail ego David would make himself mad and metamorphose into the Hulk and begin his NEW INCREDIBLE BULK WORKOUT, and he had to, otherwise the movie studios would have to cut the Hulk franchise loose.

The program he followed was so effective that the movie people decided they had to rename the latest sequel in the Hulk franchise, from Hulk 2 to The Incredible Hulk, seriously I kid you not.

First and foremost the Hulk would start the day, like any good dedicated bodybuilder with a good hearty breakfast, 100 egg whites to get a good protein buzz and put his body into a positive nitrogen balance, along with 20,000 grams of oatmeal. He would then bounce his way to the local gym where he would begin his weekly workout plan with some lat pulldowns.

Using two warm-up sets and 4 working sets with rep ranges between 6-and-8 with 10,000 pounds for that true mass-building feel. Once warmed up he would then move onto the next exercise, the hardcore bodybuilders favorite, bent over rows, again keeping the reps down to 6's and 8's using upwards of 20 - 25,000 lbs to remain in that mass-building zone.

Then to finish his incredible back workout, he would move onto one-arm rows, where he used his purpose built dumbbells weighing in at 15,000 pounds each.

I heard a rumor from bodybuilding paparazzi Isaac Hinds (who allegedly did a photo shoot during one of these workouts, and we are yet to see the pics - what's the deal with that Isaac?) that written on the dumbbells was "Hulks Weights" just to let Jay Cutler know who exactly was throwing around this type of poundage!

Post workout - to prevent muscle breakdown from excelling past muscle synthesis, Hulk took full advantage of the "window of opportunity" by consuming 5 lbs of his favorite whey protein mixed with 2 gallons of water and 1 lb of creatine and glutamine - he likes them creamy!

Following his muscle-building protein surge, Hulk would then move onto his favorite hibachi steak house where he would have 10 pounds of filet steak, 2 pounds of steamed rice and 3 pounds of steamed broccoli (to maintain his green complexion).

He then returned to his home where he would consume another protein shake, but this time it was a slow release shake with a combination of whey, soy, and casein. Following this he would have his mid-afternoon power nap, all in the aid of increasing recovery to maximize his bodybuilding gains.

Upon waking Hulk would then consume 10 pounds of live chicken breast, 2 pounds steamed rice and a further 3 pounds of steamed broccoli. He made sure to point out and I quote here:

I kind of understood what he was saying because there were a few guys in my school that spoke in a similar fashion, they were on the chess team (we all know that us muscle heads are far more intellectually superior and can easily conjugate sentences with big words like "marmalade" and know what they mean).

Anyway, after finishing his chicken feast, Hulk would prepare for his second workout of the day focusing on a smaller muscle group.

For his resistance training portion of the workout his main focus was on the cardio session where he would perform 45 minutes of intervals, to maximize body fat oxidation.

Post workout - a 5-pound portion of protein was consumed along with the creatine and glutamine, and the day would end with two more chickens and cows before sleeping until the following day where the cycle would be repeated.

Below is an outline of Hulk's mass-building workout, including reps and poundages. But remember that this is "The Incredible Hulk" and the weight used may not be suitable for mere mortal men, unless you have been affected by some kind of gamma ray and you turn into a huge angry green man, and if that is the case more power to ya. I won't make you angry by telling you not to do anything!

Now this was a workout even Tom Platz would have coward away from. 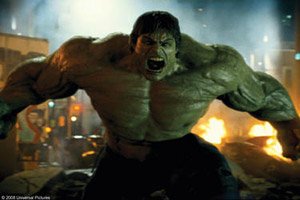 Click To Enlarge.
The Hulk Gets Ready To Do Some Monster Curls.
© 2008 Universal Studios.

He focuses on getting in high amounts of quality protein and carbohydrates with each meal which he consumes every 2 - 3 minutes. He also takes full advantage of supplementation utilizing both pre- and post-workout formula's to increase quality mass while minimizing body fat accumulation. We all know how they are in Hollywood these days and the Hulk is no different. 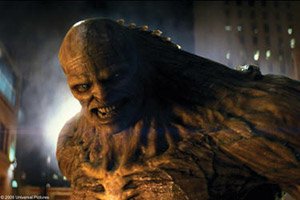 So there you have it, straight from the trenches - Hulk's Bulking workout! Remember, do not try to consume the same amount of food as Hulk, he has a radioactive advantage over us which also allows him to lift more weight machines in the gym during the course of the off-season.

Stay safe in the gym and maybe use some of Hulk's bodybuilding philosophies to help achieve your training goals. We may never be a comic book super hero but we can sure as h#ll look like one!

Click To Enlarge.
Use Some Of Hulk's Bodybuilding Philosophies
To Help Achieve Your Training Goals.
© 2008 Universal Studios.

Get Tickets To The Movie: www.fandango.com