Scientists have discovered this missing link in our food chain, and can see that the rapidly increasing degenerative diseases worldwide may be directly related to the absence of this substance in the human diet. Learn more...

Until recently, most of the world has been kept in the dark about a "miraculous" medical discovery that is so safe, powerful and effective that "doctors" spanning the globe have used it for thousands of years with amazing results.

Called the "missing link" to optimum health and nutrition by leading scientists, medical studies have shown that this "secret extract" has the ability to change one's life for the better.

Scientists have discovered this "missing link" in our food chain, and can see that the rapidly increasing degenerative diseases worldwide may be directly related to the absence of this substance in the human diet.

Now, experts know that more than vitamins and minerals are required for optimal health, and this third nutritional element may be equally important.

This breakthrough discovery is supported by little-known and even secret medical research coming from top institutions around the world... medical schools, hospitals, clinics, and pharmaceutical laboratories.

Most of the world doesn't yet know about this amazing discovery and for some very good reasons: 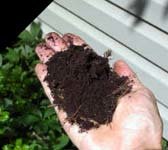 So what, you may be asking yourself, is this "Miracle Substance?" The answer lies in the Earth's very own ancient and rich soil deposits more commonly known as Humus. Humus is that organic portion of soil that remains after millions of years of microbial decomposition of plants and vegetation.

Further decomposition of these ancient remains form our oil and coal deposits. But geologists have found another most unusual strata that are called humic deposits.

They are quite rare and can be found only in certain areas of the world. It is these deposits that are exceedingly rich in our miraculous, little known substance called Humic Acid.

What Is Humic Acid?

Humic acid, by definition, is a fraction of humic substances composed of a long chain molecule, which is high in molecular weight, dark brown in color and soluble in an alkaline solution. Again, little is known about this amazing molecular complex but what is known is that Humic acid, depending on the need for balance in the whatever situation, can behave as both a donor or acceptor of electrons.

What this means in laymen's terms is that it will bind to both positive and negatively charged ions making it the most powerful free-radical scavenger and natural anti-oxidant known. Which makes sense, since Humic Acid has long been used in various ancient cultures as folk remedies for a wide variety of illnesses?

The following are excerpts from Bard, R. Effects of Humic Acid on Animals and Humans, 2002, pages 3-7, a review of current research of the many traditional uses for Humic Acid:

"Humates boaster (sic) the immune system. Dr. Daryl See, M.D., Immunologist of UCLA Medical School suggests that the mechanism is related to the humates ability to complex sugars within the body.

"The abundance of these complex sugars allows the body to manufacture glycoproteins that attach to the killer and T cell acting as a modulator or communication link between the cells. This regulates the immune system cells and prevents either T or Killer cells from becoming out of balance.

"Humates cause the immune system to recognize its own dead cells thereby reducing infection. Baylor Medical School is currently researching humates both topically applied and internally dosed for burn victims to reduce infections.

"Russian scientists are using the same principle for the treatment of radiation sickness. Sodium humate has been found to increase the lifespan of mongrel rats exposed to lethal doses of cobalt radiation8."*

"Humates are effective media additives for the production of antibiotics in the soil 45.

Humic substances have long been known to exhibit anti-viral properties44 in particular rhinoviruses35.

The mechanism whereby humic substances inhibit the cytopathicity (sic) of a number of viruses has been studied in some depth. It is thought that the materials prevent viral replicating by sorbing onto the viral envelope protein and thereby blocking the sorption of viral particles to cell surfaces31.

Humic acids have also been employed as veterinary medicine therapy successfully employing peat mull (extracted humic acid) to prevent the transmission of foot and mouth disease in pigs(33). Humate is a pharmacy that raises non-specific organism resistance. This fact was confirmed by using such models as atoxic anemia, toxic hepatitis, peptic ulcer and hypercholesterolimia15."*

"Fulvic acid in the soil acts as a filter for toxic metals. It will grab a toxic metal and immobilize it which prevents it from migrating or chemically reacting.

"When crops are grown on soils deficient in fulvic acid, toxic metals can be absorbed by the plant and passed into the food chain. Many of our foods present today are grown under conditions of "worn out" soil. As a result, more toxic metals are being ingested. Fulvic acid has the capability of removing these toxic metals from the body." *

"Humates are known to stimulate microbial activity. In soil testing for microbial activity, levels increased 400 to 5000 times with the introduction of humate (300 ppm) into the soil. Humates added to feed rations stimulate the microbial growth and the extent can be quite large depending upon the species, the culture medium, and the environment 45.

"It seems that within the body, humates stimulate the "good" microbes while suppressing the "bad" microbes. Testing of milk during field trials indicated a large increase of microbes within the milk. This is usually an indication to the dairyman of impending mastitis (tit infection). The opposite actually happened.

"Mastitis cases within the milking herd dropped from an average of 3 to 4 cases daily to 4 cases in a month26. Additional confirmation of reduction of mastitis was observed in lactating female goats.

"Three female goats with severe mastitis were administered doses of humate over a two-week period. At the end of 7 days, swelling of the mammary glands had subsided and the goats were back to normal activity allowing the kids to nurse without discomfort." *

These are just a few of the health benefits that Humic Acid has been traditionally known for.

What Should One Look For In A Humic Acid Supplement?

If you are one of the millions of people that would benefit from humic acid supplementation, be sure to look for a high quality extraction that has been specifically manufactured, sterilized, standardized and prepared safe for human consumption. Remember, humic acid comes from sources that are rife with microbes, whether "good" or "bad."

Also, not all humic complexes exhibit maximum binding activity. An extract that guarantees the purity and quality and yields a consistent and predictable product should be your only choice.

* These statements have not been evaluated by the Food and Drug Administration. They are not intended to diagnose, treat, cure, or prevent any disease.