How To Use The Body Opus Diet!

Body Opus was the first real diet for people that weren't overweight. In fact, it is recommended that you not start this diet until you are under 15 percent body fat... Learn more.

Unless you have been hiding under a rock, you should be familiar with Dan Duchaine's Body Opus diet. Dan Duchaine was known as the steroid guru throughout the 1980's until his death in 2000. He was driven to find out the answers to the questions that nobody else could answer. Duchaine applied what he learned to himself and later to other bodybuilders around the country.

Body Opus was the first real diet designed for those people that weren't overweight. In fact, Duchaine recommends that you shouldn't start this diet until you are under 15% body fat for males and no more than 20% if you are a female. These are average by most books, but compared to what is out there these days, I would almost put these body fat numbers in the above average category. Will these percentages mean that you are lean already? No, but a low level of body fat is attainable from these starting points.

Don't worry, if you are above these percentages, just get down to them by using an iso-caloric diet, and then you can start the real Body Opus journey. I know that there are many variations of this diet out there now, but in my opinion, this is where they all started.

Dr. Mauro Di Pasquale has his Anabolic Diet, which is similar in many regards, but not quite as specific. I am not saying that any one of these diets or the variations out there are any better or worse, rather, I think it is important that you know why the diet works before you try it. This way, you will be better able to make adjustments if you hit a plateau.

Many diets that call for caloric restriction do work, initially. However, for every three pounds of fat you will lose, you will also lose one pound of muscle! This is unacceptable to those of us that have worked so hard to put the muscle on in the first place.

Another problem with these diets is that you can only drop your calories for so long before it doesn't work any more. The body is a very smart machine. As Dr. John Berardi says, calorie intake will dictate metabolism.

So, that means that even if you drop your calories all the way down to 1,000 a day, eventually, your metabolism will slow and your fat storing enzymes will be primed and ready to work. Then, you may decide to eat more calories for a few days or go off the diet completely, and what happens is you become fatter than when you started. So, Duchaine wanted to attack these two problematic areas. How could he get his clients to retain muscle while losing body fat and also keep the metabolism running optimally?

Duchaine says that losing 2 1/2 pounds per week is the general consensus out there. Did you ever wonder where this number came from? Well, according to Duchaine, it was from the medical community and their advice to very overweight patients. That doesn't apply to those of us at or below 15% body fat.

Secondly, that number came into the bodybuilding world because back in the 1960's and 1970's, bodybuilders would pick a show date and count backwards. This would allow for an 8 to 12 week steroid cycle. These assisted bodybuilders could lose this amount of weight per week and not sacrifice muscle tissue. However, for the unassisted athlete, it doesn't happen that way.

The Body Opus diet calls for a ratio of 70% fat and 30% protein. At least half of the fat in the Body Opus diet should come from the essential fatty acids, such as those found in fish and flaxseed oil. Volek et al., has found that very low carbohydrate diets resulted in significant fat loss and a concomitant increase in lean body mass, possibly due to increased growth hormone (GH) output.

Di Pasquale reported that when insulin is low, GH is high. Fat is also a precursor to androgen production, meaning a high fat diet may cause testosterone levels to rise. Of course it is literally impossible to get zero carbs in the diet due to trace amounts found in protein sources, but that is okay. Duchaine recommended keeping carbs below 12 grams a day, including vegetable sources.

I believe that Duchaine was wrong when giving his vegetable recommendation. It is okay to have your green, fibrous veggies. These types of vegetables will not raise insulin levels, and because of the fiber contained in them, there are very few impact carbs (carbs minus fiber). I find that the veggies will serve two main purposes. They will allow you to feel fuller after a meal, and they will help you move your bowels. Trust me; this is a big one, unless you want to wind up getting fissures and getting so annoyed with the diet that you give up on it.

Many people, especially those concerned with physique enhancement, get nervous that strength will go down with reduced carbs and that our body will eat away at muscle tissue. However, this is simply not true if the numbers are adhered to. Catabolism of lean body mass is reduced by ketone bodies.

Hormonal changes of a ketogenic diet reduce circulating levels of insulin and increase glucagon, a hormone that is great at freeing up fat from our fat cells. It has been found that once the body adapts to a diet such as Body Opus, two of the byproducts of fatty acid oxidation, namely 3-hydroybutyrate and acetoacetate, produce more kilograms of ATP per 100 grams than glucose does (Manninen, 2004).

Adenosine Triphosphate is the compound that fuels all movement in the human body, including lifting heavy weights to build or maintain muscle. What this is telling us is that the body can actually generate more ATP on a carbohydrate-restricted diet than it does on a normal amount of carbs. If you couple that with glucagon, your body will start to show dramatic changes in composition. There is a snag however, if glucagon is chronically raised, it can become catabolic.

So, what do we do? Well, Body Opus is a cyclic diet, with five days of low-calorie and very low carbohydrates (VLC), followed by two days of high carbohydrates and moderately high calories to cause muscle cell expansion and glycogen super compensation.

During the deprivation period, glucagon is raised, and it is glucagon that allows the human body to convert fatty acids into ketones. Ketones will be the preferred fuel source for the brain on VLC diets. Also, when ketone levels are high enough, muscles will use them as fuel rather than glucose or fatty acids.

Once preferred, ketones cause a reduction in muscle catabolism since the body will not prefer glucose. And, ketones cannot be converted back into fat, meaning they must be excreted if unused. Not so with glucose.

I believe that when we diet down on lower carb diets as opposed to VLC, we actually cause more muscle loss. Think about it, if the body is still in a state of using glucose for energy, even if you are only having one cup of oatmeal per day, then it will turn to the process of gluconeogenesis, turning amino acids into glucose. Yes, that means your muscle will be "burned" for energy.

So far, we have fat being stripped off the body and a reduction in catabolism. Sounds pretty cool, but there is more! At the end of the week, on Friday evening or Saturday morning, depending on your schedule, you are going to increase carbs and calories. Your muscles will be hyper sensitive at this time, and you will take advantage of this.

Glucose stored in your muscles is called glycogen. Ketosis, as will be achieved in the first part of the Body Opus diet, causes glycogen to be temporarily depleted. It is at this time, when we jam the muscles full of calories and carbs that we will get a very big anabolic response.

Duchaine says that this is essential to any fat loss diet, as we will further offset muscle loss and possibly build muscle in the process. The ratio during the re-composition phase should be roughly 65% carbs, 15% protein and 20% fat. 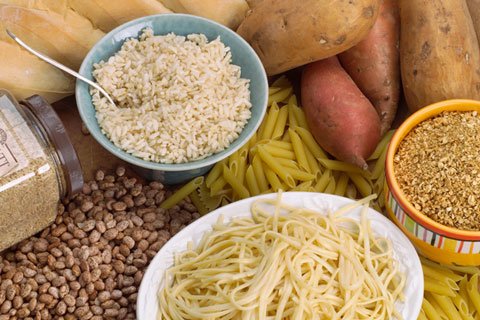 Click To Enlarge.
During The Re-Composition Phase 65%
Of Your Diet Should Be Made Up Of Carbs.

Duchaine calls for fast acting carbs in the first meals after loading begins, then you taper off to more slow acting carbs, and finally start your descent into a state of ketosis on Sunday night. There are many fine details that I did not include in this article, but I thought it would be beneficial to give the basic idea and background for those of you that are thinking of getting ready for a show or leaning up for the summer.

I find that upping the calories to a level of 15-17 cals/pound of bodyweight is a big enough increase. On the flip side, I have found that roughly 11 cals/pound of bodyweight is a great place to achieve optimal fat loss. I would also recommend that if fat loss slows, first lower the calories during the ketogenic part of the diet and keep the loading calories normal. If you start to lower both amounts, you will eventually run into the metabolic slow down that happens with dieting.

Of course, you are an individual and you will need to find what works for your body. My strength levels have stayed the same and even increased on some lifts. If you want to accelerate the fat loss, then add in some high intensity interval training (HIIT).

This type of diet is unique in that it kind of gives you something to look forward to, and it tricks your body. I personally have found that the amount of carbs that Duchaine recommends is simply too high, and I begin to smooth out. The numbers above are from personal experience and should be a good guide to help you figure out where to start.

If you are doing this for a show, just take notes on what day you look best after the carb and calorie increase. I finish mine on a Sunday and have been looking best on Wednesday night.

Kyle is a Certified Strength and Conditioning Specialist through the NSCA and competes as a natural bodybuilder in the NPC. Learn more.