The body runs on a variety of fuels. It can convert certain nutrients into other fuel sources depending on need. Learn which nutrients the body can convert, and how it impacts your goals!

The body is an amazing machine, able to build the materials it needs for growth and repair without batting an eye. It also can fuel itself on a staggering number of substrates from carbs, protein, and fat to the more esoteric, like alcohol and ketone bodies. Burning these fuels when ingested, we understand fairly well, but the human animal also manufactures fuel by converting other substrates depending on need.

Recently, these conversions came into my view because of chatter on the Interwebz about glucose turning into fat, or protein, or even if fat can turn into carbs. This, from what I've surmised, is a poorly understood field, not only in the fitness community but in the research community as well. Researchers still debate the possibilities and pathways in which these conversions take place.

Can the body convert excess protein into fat?

I thought I'd start here because this is the easiest one, and one I've actually seen in a real-life example. No, protein can't be stored as fat. It's almost impossible. A real-world example is John Andersen, a guy I spent a few hours talking with about a month ago. He's a professional wrestler and at one time, was the scariest, most powerful strongman competitor around.

At 6' and 280 pounds, John is a shredded beast and always has been. His physique is that of an action figure chiseled from marble. His diet? Protein shakes, meat, eggs, a few veggies, and nuts. The vast majority of John's calories come from protein.

The chemical side of it isn't as exciting or captivating as seeing John's results, but it's worth mentioning all the same. From a biological standpoint, amino acids are very difficult to turn into fatty acids. Only two of the ketogenic amino acids possess a structure capable of forming a fat, but as you might imagine from their name, they're more likely to be converted into ketones, which the body clears almost completely through irreversible pathways, i.e., once ketones become metabolized, the chemical products cannot be converted back into energy substrates. These aminos are leucine and lysine to a lesser extent. 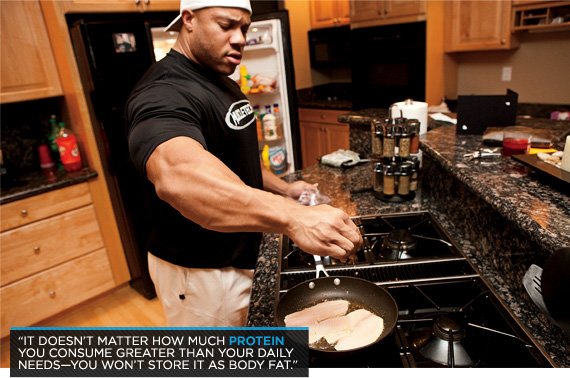 In contrast, the glucogenic aminos (just about all of them except leucine, which is purely ketogenic) could become fatty acids by converting first into glucose through gluconeogenesis. This is an inefficient process. As I'll explain, glucose is also a poor substrate for fatty acid production. There's one amino acid that's worth pointing out as special: glutamine.

Researchers from the University of Oxford found that glutamine can contribute as much as 10% of the storage material in fat cells. Glutamine can be stored as part of the lipid complex, thus contributing to overall body-fat mass. This was discovered through radioactive marking of the glutamine molecules.

The result of excess protein in the diet? It doesn't matter how much protein you consume over your daily needs—you won't store it as body fat unless, possibly, you ingest a sh*t-ton of glutamine. Even then, the mechanism (and full extent of storage) isn't clear, but what is clear is that it requires other raw materials, like carbs.

What about carbs into fat?

This question interests me far more, since many diet experts (including me) claim that carbs make us fat. I'm going to talk primarily about the two monosaccharides of interest: glucose and fructose. Glucose does not convert easily into fatty acids, although both the liver and fat cells will turn glucose directly into fatty acids through a process called de novo lipogenesis.

Even then, research published in the American Journal of Clinical Nutrition found the total amount of ingested glucose converted into stored fatty acids is only 5 percent because the process is energetically expensive (about 1½ grams of glucose need to be burned for every gram converted into fat). Fructose, in contrast, can contribute significantly to de novo lipogenesis when ingested in large quantities. 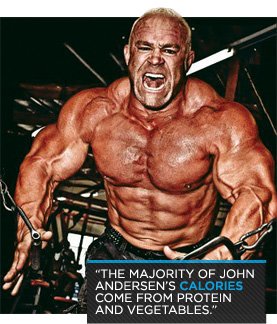 Scientists demonstrated in the medical journal Diabetes that fructose can create unlimited by-products that lead to the accumulation of fat. The body regulates massive feedings with glucose, in contrast, through a rate-limited step that prevents pure glucose from sparking lipogenesis.

This, however, isn't the whole story. Carbs can be stored in fat cells in two ways. One could be through the direct conversion of sugar molecules into fatty acids. As I said earlier, this happens, but at a slow rate. Even at a slow rate, it would contribute a pound or more of pure body fat per year, depending on how much body fat you already possess. Where carbs contribute significantly and efficiently to fat storage is through conversion into glycerol complexes.

Remember, fat cells don't just suck up fatty acids and hold on to them. They need glue to hold them together into triacylglycerol (TAG) molecules, which are the body's predominant form of stored energy. This requires three fatty acid molecules and one glycerol. Glucose (and definitely fructose) convert efficiently into glycerol for the storage of more fat.

That's why when cells are bathed in insulin both lipoprotein lipase (which pulls fatty acids into cells) and GLUT4 (which pulls glucose into cells) increase on the fat cell's surface. To store all those fatty acids, the fat cells need glucose to bind the entire complex into TAG. The same researchers who discovered the strange role of glutamine in fat storage also discovered that between 40 and 70 percent of the stored material in fat cells came from ingested carbs.

Glucose (and carbs in general) is absolutely necessary for only two tasks: excessive glycogen storage, and excessive fat storage.

What about fat to glucose?

I won't bother covering fat conversion to protein, because it doesn't happen and if it does happen in the human body, it's of no biological significance. Fat converting into carbs is a different story. There are so many ways to classify fatty acids: essential and nonessential; saturated, unsaturated; trans- or cis-; short-, medium-, or long-chain; and so on. And I'm going to add one more into the mix, odd-chain and even-chain.

Even-chain fatty acids are those with an even number of carbon molecules on the backbone of the molecule. You'll see them listed as C8:0, C22:5n3, C10:1n9, and so on. Odd-chain fatty acids, as you probably already figured out, have an odd number of carbons. Examples are pentadecanoic acid (C15:0) and heptadecanoic acid (C17:0). Both of these can be used for oxidative processes.

For the ECFAs, it has been stated for decades that the body cannot convert them to glucose, but researchers in PLos Computational Biology recently showed that metabolic pathways exist to allow for a small amount of glucose production from ECFAs. 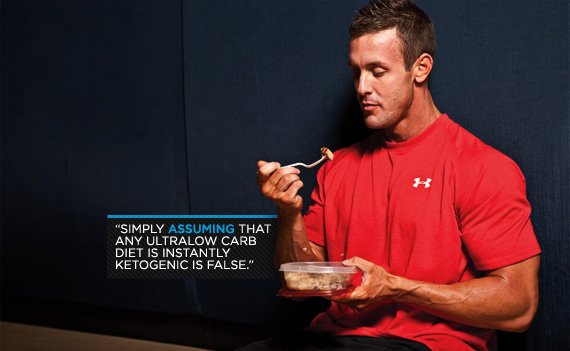 So it is possible, in states of starvation or heavily ketogenic diets (such as most of the week of Carb Nite) that EFCAs could contribute to glucose production. OCFAs, on the other hand, we know convert easily into glucose. This is seen readily in animal and human studies where diets rich in even chains lower blood glucose levels and allow a ketogenic metabolism to take over.

An ultra-low-carb diet that contains rich amounts of oddchain fatty acids, however, allows the body to maintain blood glucose levels at the previous amount as demonstrated by animal and human research. In other words, an ultra-low-carb diet rich in OCFAs is not ketogenic; it's not much different than a carb-based diet- metabolically, that is.

Since animal fats do contain a certain amount of OCFAs (not more than 5%), it's actually a good reason to eat animal sources for the ability of the OCFAs to supply the small amount of glucose needed for the brain while preserving protein retention.

I hope, if nothing else, this demonstrates how naïve it is to use universal qualifiers with macronutrients. Not all carbs act the same in the body; neither do all fats and neither do all proteins (although that's another subject). The type you eat can make a massive difference. For example, simply assuming that any ultra-low-carb diet is instantly ketogenic is false.

Thinking you can't gain fat if you eat only carbs is absolutely false. The type, timing, and combination with other nutrients is what matters, absolutely.