If you have ever had a cup of coffee, a soft drink, a cup of tea, or a piece of chocolate, you have sampled one of the most common and widely used drugs in the world, caffeine.

Everybody takes drugs. That statement may be shocking to many people. And yet, if they have ever had a cup of coffee, a soft drink, a cup of tea, or a piece of chocolate, they have sampled one of the most common and widely used drugs in the world, caffeine.

Is Caffeine A Drug?

Some may object, arguing that caffeine is not a drug. However, medical professionals agree that the term "drug" can accurately be defined as any chemical substance that is capable of altering mood, perception, or thought. Despite its popularity, many health professionals have, in the past, and continue to, raise questions as to whether caffeine is helpful or harmful. Therefore, what are the risks versus the benefits for those who consume foods containing caffeine? 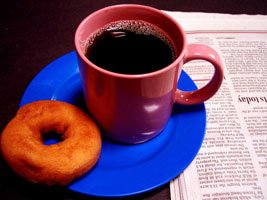 Studies have proven that caffeine has positive effects on the respiratory system. According to the magazine, Marie Claire, caffeine has been shown to help reduce asthma symptoms, "because caffeine is a chemical cousin of the prescription asthma drug theophylline, which widens the airways leading to the lungs" (March 03 p. 261).

Caffeine can also have a very positive effect on the blood vessels of the brain, which, when swollen, can cause painful throbbing. Because caffeine works to constrict these blood vessels, it can reduce or even remove the pain caused by headaches.

"Drinking coffee and other caffeinated beverages might be linked to a reduced risk of type 2 diabetes, according to findings in Ann Intern Med (2004; 140: 1-8)" (p.137), stated the January 10 edition of the Lancet. A study of 126,000 men and women was conducted, and results showed that those who consumed little or no caffeine were, says the Lancet, "more likely to develop type 2 diabetes than those who consumed more caffeinated drinks."

Another advantage of caffeine is its apparent ability to prevent or stop the spreading of skin cancer. Researchers in the United States achieved these results by testing mice with skin tumors. After caffeine was rubbed on the skin of these mice, researchers found that caffeine effectively killed cancer cells without damaging any of the surrounding skin.

The Risks Of Caffeine

It appears as though the risks of caffeine are somewhat limited. Women are the most at risk because the primary dangers of caffeine consumption are associated with the conception and development of unborn children.

The Marie Claire magazine writes, "Women who consume 250 mg of caffeine daily (that's two to three cups of coffee) have been shown to take slightly longer to conceive," and that, "During pregnancy, consuming the caffeine in five or more cups of coffee a day doubles your risk of miscarriage."

Click To Enlarge.
Consuming The Caffeine In Five Or More Cups Of
Coffee A Day Doubles Your Risk Of Miscarriage.

Caffeine also appears to be an addictive substance. USA Today argues that, "Although psychological dependence on caffeine has yet to be widely documented, a physical dependence upon the drug is very evident" (p. 4). Caffeine dependence can be seen if a person consumes as little as 100 mg. a day, and then tries to stop taking in caffeine.

USA Today continues by showing that withdrawal symptoms, "which includes headache, fatigue, inability to concentrate, and even nausea and vomiting" (p. 4), can be experienced by those trying to kick the habit.