When Jen’s uncle passed away, her whole family chose to get fit, but Jen took it to a higher level. She lost 35 pounds and got on stage!

Two years ago I started a journey in fitness. Sadly, it all started with my uncle's death. My uncle was only 65 when he died. He was healthy and active - always had been - and his passing left my entire family in shock.

We gave ourselves 2 1/2 months. That was my catalyst. 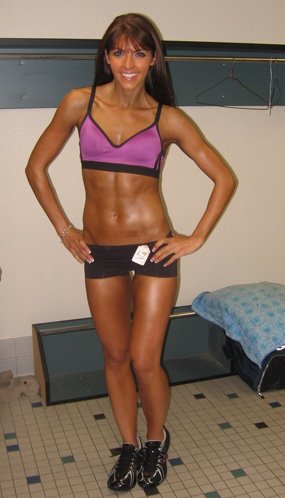 After I decided I needed to make a change I joined Gold's Gym and immediately met my trainer, and now dear friend Megan who helped me lose 15 pounds in those first few months - ultimately enough to win my family's competition.

But it didn't stop there for me. I saw changes - I felt better and I wanted to keep going. Megan was, and is, a figure and sports model competitor, something that I knew nothing about until meeting her.

I had of course seen bodybuilders, but I had no idea how far that community spanned and how diverse the levels of the competitions were.

She saw something in me that led her to believe I could be a part of those competitions and after some discussion and convincing I decided to try my hand at a Bikini Competition.

I trained and dieted hard, and with Megan's amazing help and expertise I competed in my first show in October 2010.

In that show, I competed in both the Bikini Diva and Sports Model divisions and came in 3rd and 1st respectively. Not only did I place well but I loved it!

So that day I decided I would compete again, which I did the following April. For the April show I just competed in Bikini Diva and placed 4th. On that day I weighed in at 125 pounds with 13% body fat and felt the best that I ever had. 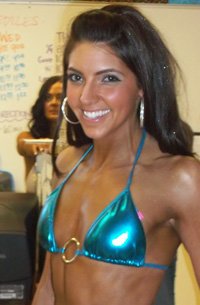 There is so much I learned about myself during this process. When I first stepped into the gym two years ago I was not only unhealthy and overweight but I was unhappy and unsure of who I was, what I wanted, and what I was capable of. Luckily, I'm able to say I don't know that girl anymore.

Through the training and dieting and discipline necessary to compete I have learned that I am a stronger person than I ever knew possible.

My will and strength are tried everyday - not only by the amount on the weights (although that is a challenge too) but by all the little decisions I make, such as not eating the candy in my office candy bowl, not having a glass of wine with dinner, having water instead of a soda and working out after work rather than going to happy hour.

Each of those little decisions becomes a mini victory and each victory becomes fuel for my fire.

Now, that being said, was it easy?! Absolutely not! But I wouldn't change any of it! This is the new me and this is where I am: still training, still eating clean, still improving - constantly pushing myself to see how far I can go. I've already pushed myself further than I ever thought possible and hopefully, I'll keep pushing.

It's not going to be easy but it's definitely worth it! Try not to get caught up in the number on the scale; remember why you started and focus on how you feel.