Life threw several curve balls at Tannis that kept her off balance, unconfident, and overweight. At age 33, she learned to deflect punches and roll with a proud look in a fit body!

Name: Tannis Soderquist
BodySpace: fitnhott
Why I Decided to Transform

I have been overweight all of my life. From an early age, I remember my uncle calling my twin sister and I fat. I was called worthless and no good, fat, and ugly, but I continued to gain weight. I was a stress eater, and the more I got bullied and bugged about my weight the more I ate to make myself feel better. I spent most of my time with animals, books, and drew to get away from the pain.

I always dreamt about being skinny. I thought if I was skinny people would like me and want to be my friend instead of calling me names. I was 175 pounds when I graduated high school and hated the way I looked and who I was. The negativity made me believe I was worthless.

I began yo-yo dieting after high school; eating one meal per day helped me lose a little weight and I started to feel like I could be popular. But it wasn't sustainable, and before long I gained weight again. I went to college in 1999 and started going to the gym with a friend. I had no idea what I was doing, so I lifted a little and did lots of cardio. I got down to 140-145 pounds and was semi-skinny fat with no muscle tone. 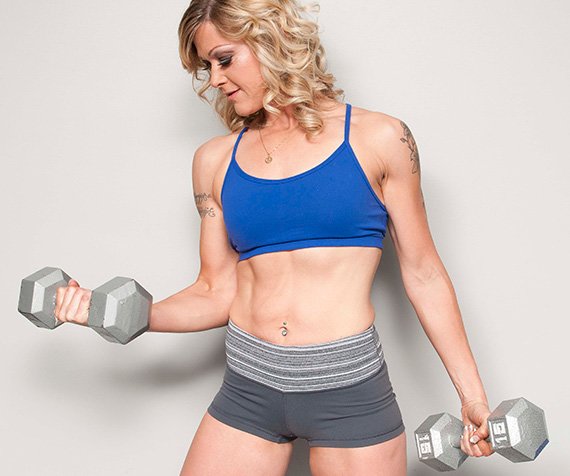 The fall after I graduated college, my dad passed away unexpectedly. I didn't know how to handle his death and the family stress, so I severed ties and started to eat again.

I felt like I didn't deserve happiness and ended up pregnant and married to the first guy I ever went out with. I gained so much weight during my pregnancy that I fell into a deep, ugly, and sad obese state. In October 2001, our daughter was born with a rare kidney disease, ARPKD. She lived for seven days and passed away from the disease. That's when I hit my lowest point mentally and physically. 198 pounds was the last weight I recorded and never stepped on the scale again. I'm sure I was more than 200 pounds after the death of my daughter and the stress and sadness that came with it.

I avoided the camera and hardly went out in public. Four months after her death, I bought a stationary bike and spent three or more hours per day on it (I read entire books while peddling). I stopped eating and used the bike to escape my miserable life.

In 2004, our second daughter was born happy and healthy, but I still felt stress and pain. I tried exercise tapes, but quit after a few days. I ate homemade tapioca for every meal to lose weight.

When my daughter turned two years old, I decided to change and make an example for her.

I lived an hour away from the nearest town in a tiny community that had a post office and a TOPS chapter that I joined. I felt the support of other people who struggled with weight issues. We made our own gym and started working out together for 30 minutes three times per week and later increased to 40 and 60 minutes. 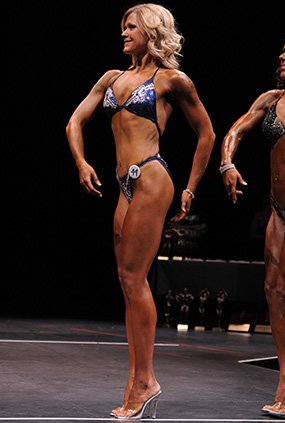 I bought my first issue of Oxygen magazine and started reading about Tosca Reno and her journey and Jamie Eason became my role model.

I read all the fitness information I could. I used home workout tapes with my daughter. It took nine months from the start of TOPS to reach my goal weight of 134 pounds. I had little muscle mass, but I was hooked on fitness. I wanted to help others, so I obtained my fitness theory and group fitness certification.

Before long, I wanted more and obtained my resistance training certification too. I left my abusive marriage and started fresh with my daughter thanks to help from my sister.

I taught group classes, hit the gym more, and found that I enjoyed working one-on-one with people, so I obtained my personal training certification.

My sister, daughter and I moved to Edmonton, Canada, and I started working at Spa Lady full-time as a personal trainer. I met a great friend who encouraged me to train for a figure competition, and in June of 2011, I competed at the ABBA Northerns.

I hit the stage at 114 pounds, placed 10th in my category, and went right into my second competition on October 2011 at the Muscle Beach Fall Classic. I came on stage with more muscle mass at 116 pounds and placed fifth with a provincial qualification. I'm looking to compete again this June and have been training and eating for more lean mass.

Fitness changed me as a person, a mother, and a trainer. I'm the strong, confident, healthy, fit role model to my daughter that I wanted to be.

Coming off of competition season and into the off-season was a challenge, but with the right support system I'm feeling great. Taking down time from the gym is hard too. 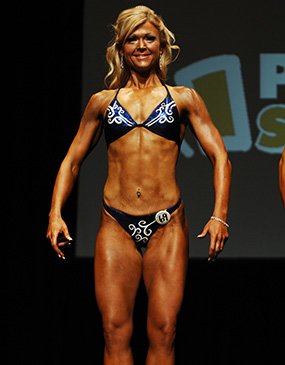 I will obtain my pro card in figure and compete in the Olympia and the Arnold, and continuously be a motivation to others. I also want to build up my online training and nutritional coaching business that my sister and I operate together and be a positive and happy role model to my daughter and fiancé. It's my mission to grace the pages of fitness magazines and garner a sponsorship.

Bodybuilding.com and people on the site are great motivators to help me stay on track. The forums and blogs and the amount of information available is second to none.