When half marathons and steady-state cardio failed to deliver results, Kylie turned to weightlifting and competitions. See how her fitness transition torched unwanted body fat!

I was average-sized growing up despite eating lots of junk food because I played sports. After moving to a new school during my junior year of high school, I put on weight trying to keep up with my new group of guy friends and their 10 p.m. greasy diner habits.

My New Year's resolution in 2005 was to lose weight by visiting the gym for hour-long cardio sessions in addition to my sports practices. I counted calories and it quickly spun into an unhealthy addiction. By the end of my senior year, I was sad and depressed despite being the thinnest I had ever been.

When I reached college, I loosened up but still did daily cardio and was conscious about what I ate and drank. I was the queen of processed diet foods. Sugar-free oatmeal, Lean Cuisines, and light yogurts were my staple food choices. I kept my weight consistent throughout college but never had the lean body I wanted.

After graduating in 2010, I moved from New York to live in Southern California and became a working woman with a desk job who partied too much and went on mid-week dinner dates to meet people in a new city. The calories added up until I hardly recognized myself in the mirror. Through it all, I consciously worked out and tried to eat healthy, but looking back, I did it all wrong.

After meeting my boyfriend, my perception of working out and eating healthy changed. Erik was always on Bodybuilding.com and encouraged me to lift rather than do cardio. He prepped his meals for the week while I visited the snack bar at work. Over time, his words started to sink in. I started searching Bodybuilding.com and printed weightlifting plans to bring to the gym.

One of my bucket list goals was to run a half marathon, which I completed in June 2012. Despite training for months, my weight crept up to its highest level because I didn't understand what I was doing.

In October 2012, my perception of fitness and health changed when I read The Eat Clean Diet by Tosca Reno. I purchased the book years prior but didn't read it until a coworker told me to. I started eating clean and felt amazing after one week. My stomach aches stopped and I had more energy. Though I lost a few pounds, I didn't completely switch to clean eating throughout the holidays. By January 2013, I made another New Year's resolution and wanted it to be permanent.

I threw out processed diet food and started eating whole foods. I started going to the gym in the morning before work. It was a huge change that had an enormous impact because I never had excuses. One of the biggest influences was discovering the supportive fitness community on Instagram. I spent hours looking up fitness people and kept coming across bikini competitors. Within a few weeks, I thought more seriously about my fitness future.

I turned 25 years old in March and felt like I was going through the motions of life. I felt better and started to lift more seriously but couldn't get the idea of bikini competitions out of my mind. For my birthday, I asked for a ticket to the upcoming NPC show. At the show, I felt completely out of place but approached Team Edge, a national bikini team that I discovered through Instagram. I told them I was interested in joining the team and wanted to be ready for a show in October.

Team Edge told me to email photos and I suddenly felt confused and unsure about it. I'm a pretty reserved person by nature and didn't know if the industry was for me. After sleeping on it, I woke the next day motivated and ready for the challenge.

I sent Team Edge coaches Joe Discullo and Ingrid Romero my before photos and they said I could be ready for a show in August if I pushed myself. That seemed crazy, but their confidence made me believe it was possible. 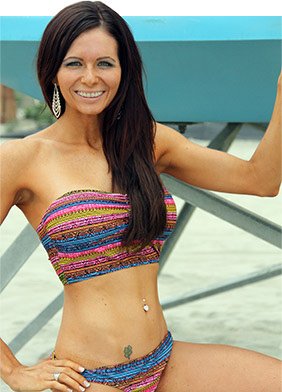 "With clean eating, weight dropped off and I reshaped my body with muscle."

I ordered an online fitness plan from Ashley Horner to got started on a lifting schedule before I officially joined Team Edge. I woke up even earlier to ensure I got to the gym as soon as it opened to finish my workout. It was intense and the hardest I ever worked out. With clean eating, weight dropped off and I reshaped my body with muscle.

I became more consistent and took progress photos, which had a huge impact on my results. Rather than rely on the scale, I stepped off and started taking photos instead. In May, I looked back at comparison photos from February and was shocked at my results. I never felt better or more motivated to keep going. The photos proved that I could be ready by my August show.

Changes didn't come easy. One of the hardest weeks during contest prep was when my parents came to San Diego from New York. I wanted to enjoy the good times with them and was tempted to indulge while showing them my favorite places in the area. With my show only five weeks away, I took special precautions while they were here and packed chicken in my purse to add to salads when we went out to dinner.

When I think of summer, I envision barbecues, concerts, parties, and fun vacations, but I watched those activities from the sidelines this summer. I stayed strong and harvested inspiration from supportive like my boyfriend, coworkers, and Team Edge. I used Instagram and Bodybuilding.com's Strong To The COR Challenge to stay accountable and connect with others who lead a healthy lifestyle. Most importantly, I visualized my goals.

"Set your goals high, write them down, and tell someone about them!"

The diet was the hardest because of the social aspect. My boyfriend and I went through a real lifestyle change as we no longer went out to dinner, ate frozen yogurt, or drank alcohol.

At first, I was nervous about what people would think when I drank water at happy hour or repeatedly declined birthday treats at the office, but once I started seeing results and felt great, it was easy to stick to my plan.

I'm focusing on gaining muscle mass and plan to compete in my second show in March 2014 at the San Diego Championships, which happens to be the first show I watched. I want to keep competing and bettering myself to become a pro. I plan to take my NASM personal training certification exam and can't wait to start training people.

I'm working to grow my fitness blog and website. I love learning and writing about fitness, health, and nutrition, and hope to inspire women who struggle with body image.

A big goal I have is to appear in a fitness magazine like Oxygen or Women's Health and become a health writer on a site like Bodybuilding.com.

Set your goals high, write them down, and tell someone about them! You'd be amazed at what can be accomplished when a person does this. When I set a big goal that seemed far-fetched, I took myself seriously and made it happen.

Writing down goals is important and it's fun to look back after you accomplish them. After you tell someone, you'll work much harder to make it happen.

Bodybuilding.com provided the avenues I needed to learn about dieting, exercise, and supplementation. The articles were vital to my success. I wouldn't be where I am today without Bodybuilding.com.