Kristin's elated about torching 18-percent body fat but even more proud of the strength and muscle she gained. See how she lost 70 pounds and built a hard body!

My journey started in December 2011 when I won a free cruise in a raffle. I decided to use the money I would've spent on the vacation to hire a personal trainer. I was tired of being the "wing girl" for my friends. I was about to turn 30 years old and knew my life had to change.

I joined NYSC in January 2012 and started with a small group training session. It was cheaper than private sessions but still did the trick. I instantly clicked with my trainer, Mikey. He pushed me mentally and physically by competing with me. The first competition was that he would quit smoking if I lost 12 pounds. I ended up losing 11.5 pounds and he kept smoking, but that was the last time I failed.

Six months later, I lost 60 pounds and Mikey knew there was nothing more he could do for me, so he introduced me to the fitness manager, Tabitha Sierra, who became my coach. She saw my potential and believed in me.

Tabitha was a WBFF figure pro. She asked when I planned to compete and I laughed because I thought I would never be ready. Tabitha knew I could and was right. I decided to enter the WBFF Boston Championships on June 29, 2013.

My weight-loss journey has been interesting. In one way it saved my life and obviously made it better, but some people in my life didn't see it that way. I didn't have the greatest supporters. I had doubters, haters, and nonbelievers. My friends didn't understand why I couldn't go out and eat and drink with them anymore. I lost lots of people who I thought were friends and heard lots of negativity. On the plus side, I also had many people who believed in me. Even though my family didn't always understand they were proud of me.

Now my life is completely different. I used to stay up until 3 a.m. doing nothing and my weekends consisted of drinking, partying, and late-night food binges. None of that happens anymore. I'm healthier, happier, and live a much better lifestyle in my 30s than I did in my 20s.

I worked out hard six days per week at the NYSC and did a mix of strength training and cardio. I went from eating three large unhealthy meals to six smaller clean options. I went from energy drinks, coffee, and soda to a gallon of water per day.

I wanted to quit every day when I woke up and my muscles were sore. I wanted to quit when my social life took a hit and my results plateaued. I fought the old me every day. I battled body dysmorphia for a long time and never saw the new me when I looked in the mirror. Nobody understood. They thought I was looking for attention, but in reality I couldn't see it. But quitting wasn't an option. I was determined to win this battle and lived by the quote, "She believed she could, so she did!"

My inspiration came from my mother and sister, my supporters, my trainers, my BrickHouse Bodies teammates, my friends that stuck with me, and from myself. In the end, it didn't matter who did or didn't believe in me. All that really mattered was that I believed in me. Nothing was going to change until I did.

My main problem was me. My mind couldn't keep up with my body. I was dropping weight and changing my body but still saw myself as what I was. I was constantly on the scale making sure I was changing. I realized the stress I put on myself was making me plateau. Eventually, I threw the scale out and just did the work. If you put the work in and fuel your body with the right food, you will change. 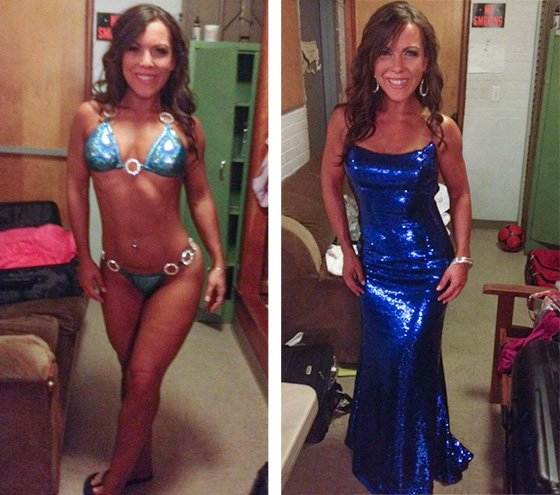 "If you put the work in and fuel your body with the right food, you will change."

I'm training hard to go back to the WBFF Boston Championships as a figure diva. I also plan to become a coach. My goal is to inspire others. If one person looks at my journey and believes they can change, it will be worth it. I want to change people's mindset and make them believe.

I'm on Bodybuilding.com constantly. It's where I learned about supplementation. I love how everything is on one site. I can go to Bodybuilding.com for supplements, workout gear, recipes, and workout routines. If I need motivation I can read stories about others who transformed before me. Bodybuilding.com is the fitness bible. The forum is great because I can find answers to anything.