Collegiate volleyball kept Karen's weight in check, but a transition into corporate America spiked her body fat. Get the tools she used to cut 36 pounds and compete!

When college volleyball ended, I lost goals and reasons to train. After college graduation, I entered corporate America and quickly realized what happens when I sat for eight hours per day and consumed without thought. The scale started to move up and I could no longer indulge in snacks and drink on the weekends.

I quickly went from 155 to 185 pounds in one year. I went to the gym inconsistently and ate cheeseburgers and fries too often. Weekends filled with Colorado Bulldogs turned my butt into a mountainous mass of cellulite.

I got a trainer at the gym and cried on the way home after a butt-kicking session left me completely embarrassed. I had trouble doing activities that used to be easy and felt humiliated. I did a few more sessions and decided that it was too expensive to continue that route, so I embarked on a journey by myself.

I lost five pounds with the trainer and was motivated to search the Internet for ways to succeed on my own. I found Bodybuilding.com's training programs, printed them off, and started following them. I lost a few pounds and became good friends with consistent lifters, Jim Siem and Keith Koecher.

Jim was training for a show and asked if I thought about doing one. I said no because I had always been a tomboy who hung out with guys and didn't feel confident about my feminine qualities. I kept working out, dropped a few more pounds, and took diet ideas from a friend who helped me lose even more weight.

My competition curiosity was rising, so I started looking into the idea and came across Dana Maney. Dana won a few competitions, lived relatively close, and was about my height. I was nervous but reached out to her and asked questions. She took me under her wing, showed me the ropes, and I was hooked. I went on to compete in five shows and showed respectably well.

"I came to realize that fitness isn't a season or a show; it's about being good to yourself and enjoying how you feel and look after a good workout and diet."

I wasn't prepared for the roller coaster of emotion after a show. I put on 12 pounds after the last competition and felt awful. The weight kept adding up and I eventually threw in the towel at 170 pounds. I came to realize that fitness isn't a season or a show; it's about being good to yourself and enjoying how you feel and look after a good workout and diet.

I decided to compete again in 2012 and got back on track. My friend, Tammy Sloan, trained for the full year and lit my fire. I turned to Justin Julson for training knowledge and Tara's Perfectly Prepared Group to gain confidence and go after first place.

During the season, I placed second in Figure F at the NPC Northstar and won the overall and an IFPA pro card at the Natural States Classic in Elk River, Minnesota. I later placed ninth at the Fitness America Competition in Las Vegas, Nevada. I competed in my first pro show in May 2013 at the Mr & Ms Natural Minnesota IFPA Pro North America and placed seventh. I competed as a pro again at the Gaspari Pro Show in October 2013, placed second and qualified for the Yorton Cup where I placed ninth.

I'm currently training with IFBB pro Shelby Starnes and the Perfectly Prepared Team. Justin continues to be a great friend but chose a different career path. While training with Justin, I lost 36 pounds and 10 percent body fat. My goals with Shelby are different. We honed in on judging critiques and did what they asked. Now we're building and getting, bigger, better, and stronger! 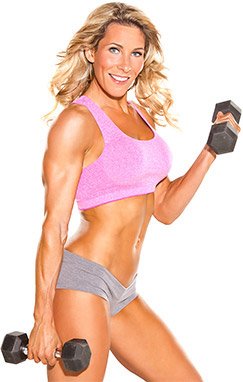 The most challenging aspect was learning to adapt when curve balls were thrown my way. Sometimes things happen that I didn't plan or prepare for and I had to adjust so it didn't throw me off schedule. I learned to have protein powder, oatmeal, and almonds on hand at all times in case something went astray.

My future fitness plans will continue on the IFPA pro circuit this year. I plan to compete in the physique division as an amateur and compete in a WBFF figure show this fall.

Bodybuilding.com helped in every facet of my journey to a healthy life. I started with the workout programs to get going and went on to order supplements. I use multiple recipes from the site for food prep to spice my meals up.