Post-partum depression backed Jessica in a dark corner. See how fitness pulled her into the light and onto the figure stage!

I gained 35 pounds during my second pregnancy, which is average for a pregnant woman, so I wasn't scared about losing the weight. During my pregnancy, I did lots of research on clean eating and wanted a plan I could stick to for the rest of my life. I found lots of great websites like Bodybuilding.com, Pinterest, and other blogs with great clean eating recipes. They were simple, which is great when you're a stay-at-home mom with two kids and a military husband taking college classes. So I started making our meals with clean ingredients and my husband and I noticed changes just by eating clean food.

One month post-partum, I was diagnosed with post-partum depression. I never had a problem with my first child, so I had no clue what was going on with my body and why I was feeling the way I did. I have an amazing husband and a great life, so there was no reason to be depressed, but I was and it hurt to admit it.

The doctor suggested I take medication for depression, even though I hate medications and rarely take them. She gave me a write-up on the medication and started listing the possible side effects: weight gain, weight loss, enhanced symptoms, drowsiness, and more. I told her I'd think about it and she put the prescription in the system so I could go get it from the pharmacy. Instead of getting the prescription, I went home and talked to my husband about my appointment, which was hard because I felt crazy for having these emotions. I was embarrassed. 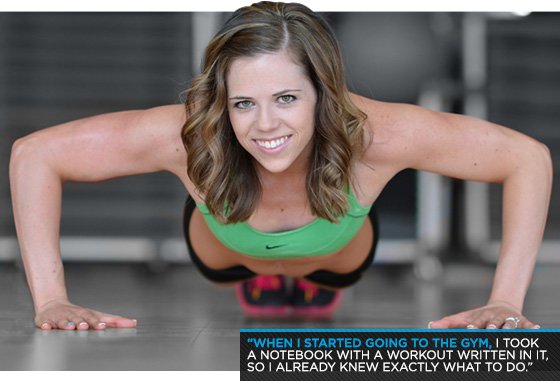 I did more research online and decided to avoid the medication. I researched medication and depression and found articles on how weightlifting helps with depression. Since I was already trying to get back into shape, I decided to start lifting instead of walking on the treadmill. I started going to the gym at night after my husband got home from work and noticed a difference in my attitude, emotions, and figure. It took time, but my depression got better without medication.

When I started to see changes from weightlifting, I challenged myself to look for a bodybuilding show in our area. I met Sandi Griffin, who competes in bodybuilding and is a personal trainer at our gym. She put together a bodybuilding/figure team and helped competitors with posing and other aspects of competing. I went to the first meeting and she discussed everything about competing and the team. I was sold. The first meeting was in January and the first show was in May, so I had four months to prepare.

If I kept it to myself, it would be easy to give up, so I started a Facebook page and told everyone about my goal. After starting the page, I got great feedback from people who were trying to lose weight, compete, and accomplish their fitness goals. They motivated and inspired me, and I did the same for them.

It seemed like forever, but I reached my goal on May 18, 2013, when I entered my first figure competition in Kaiserslautern, Germany, and placed sixth out of 12 in the short figure class. I'm not someone who says I'm proud of myself, but after the show I was proud. I didn't expect to place at my first competition after having a baby eight months prior, so I was excited. It was a long road and I couldn't have done it without the support of my family, friends, and husband.

Now that I reached my goal, I plan to continue eating clean because I feel and look better. I'm debating competing again in August. If I don't, I'll compete again next year.

When I first decided to compete, I knew I had to get my diet on track. I started to track what I ate to make sure my macros were on point. After a few weeks, it became a habit and helped me stay on track with my diet. I also started weight training five nights per week with one day of cardio and one rest day.

I started preparing meals for the week on Sunday which helped with temptations because all I had to do is grab the meal and throw it in a bag if we went out. I found meals that I enjoyed, so I didn't force myself to eat.

When I started going to the gym, I was intimidated, forgot what I needed to do, fumbled around, and left before I finished my workout. I took a notebook with a workout written in it so I already knew exactly what to do at the gym. It helped me remember what I weighed so I could see improvements or mistakes. 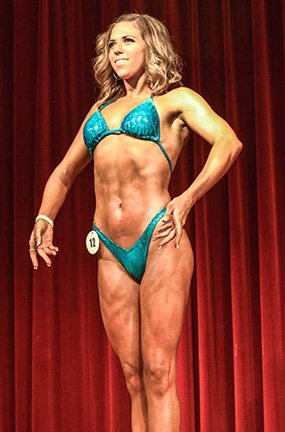 My biggest challenge was the diet. At the beginning, it was okay because I wasn't used to eating as much food as I should have. It was different to eat six meals per day instead of three.

I set an alarm on my phone to remind me to eat. After a month, I didn't need the alarms anymore. I still ate dinner with my family because we ate healthy recipes.

When it got closer to competition and I had to drop my carbs and cut certain foods, it got harder. No more family dinners. If we went out to eat with friends or had people over, I had to take my food or cook something different.

I hung my competition suit in my kitchen to push me away from eating something I wasn't supposed to.

I never thought I would pursue a career in fitness, but now I'm excited to.