Jen's junk food addiction was no match for the intensity she committed to healthy living. Get the formula that helped this Brit cut fat and build muscle!

I wasn't an active teenager. I hated sports and gym class and always hid in the bathroom. I was skinny and thought I didn't need exercise while guzzling down cola. I was very unhealthy. I started smoking and drinking and became a party girl. I stopped eating altogether during my early 20s from severe depression.

The only thing I enjoyed was eating junk food. I never received any support. As time went on, I gained weight without noticing. Then I found out I had Polycystic Ovary Syndrome (PCOS) and Hypothyroidism which contributed to my weight gain.

After numerous failed gym attempts, I told myself I wasn't a gym person. In 2012, I decided enough was enough. I watched a bodybuilding program on television where lots of beautiful women competed on stage. I saw these women in fitness magazines lying around before and always dreamed of looking like them but never thought I could. My attitude towards health and fitness was poor. The day after watching the program, I joined a gym and was determined to get fit.

Now, 18 months later, I will never look back. Fitness and good nutrition became a big part of my life. I couldn't imagine going back to my unhealthy ways from the past. It helped with my depression and illness and I no longer take medication. Fitness and nutrition is the best medicine.

At first, I did full-body workouts on the machines and did cardio after. It was hard and I went home exhausted, but I kept going. One day after my workout, a guy came up to me and said my workouts were weak and I was incredibly offended. Feeling bitter by his comments, I decided to up my game. I didn't want my depression and illnesses to affect me anymore, so I pretended I didn't have them. It was the best thing I could've done. I trained my mind to believe I could do it.

I did lots of research on the internet about weightlifting and fitness. I made new diets and workout plans from the articles on Bodybuilding.com. I saw results quickly and it spurred me on to keep going. A short-term goal was to build up my deadlift. My max at the moment is 298 pounds (135 kg). I feel strong and powerful when I pick up heavy weight.

There was a few times when I thought about quitting. As my confidence grew, I thought about doing a fitness photo shoot. I always dreamed of seeing myself in a photo with a fit, strong, and toned physique. I was determined to make it happen. In September, I achieved this goal and have never been so proud of myself.

My inspiration came from social networking. I follow lots of fitness people on Twitter and created an Instagram account for fitness posts. I documented my fitness journey daily and received lots of encouragement from others in the same situation. Before I knew it, I was inspiring other women with similar health conditions and motivating women to get fit and eat healthy.

Eating clean challenged me the most. Going from eating junk and processed food to healthy, nutritious foods wasn't easy. I had a negative attitude toward food because of my eating disorder, but I trained my mind to look at food differently. Now I look at food as fuel. I told myself that every clean meal was a step closer to my goal.

Having found a new passion for fitness, I want to help other people find theirs. In January 2014, I plan to gain the qualifications to become a fitness coach. I'll also get a diploma in sports nutrition. I hope to become a personal trainer and specialize in extreme weight loss. I will offer online training to anyone who wants to change their life. 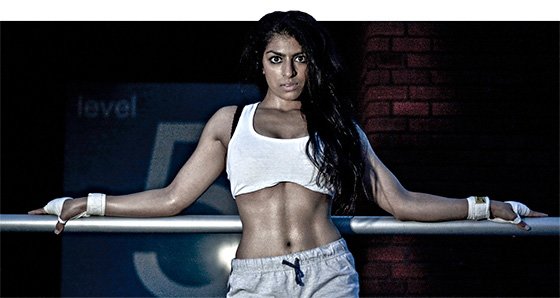 "I hope to become a personal trainer and specialize in extreme weight loss. I will offer online training to anyone who wants to change their life."

I met IFBB bikini pro Michelle Brannan who represented the UK at the 2013 Olympia. She gave a good talk on what it takes to compete and it's something I'm considering.

Reading nutrition and workout articles really helped with my goals. Having everything laid out for me was a real advantage. I read lots of Female Transformations when I was starting. I told myself that I would have a Bodybuilding.com Transformation one day and used that thought to push me.

Photo Credits and Thanks