How Alpha-Lipoic Acid Can Benefit You?

The unique qualities possessed by Alpha-Lipoic Acid, functioning as both a water- and fat-soluble antioxidant make it an intriguing ingredient and a supplement worthy of serious consideration.

What Is Alpha-Lipoic Acid?

If you're a bodybuilder or are into weight training than you have probably heard of Alpha-Lipoic Acid (or ALA), but might not be sure of how beneficial supplementing with it can be.

To give a scientific explanation of what Alpha-Lipoic Acid is, one of the easiest ways to explain it would be that it is an essential co-factor in energy metabolism in organisms from microbes to humans. Simply defined it is a substance (such as a co-enzyme) that must be available in order for another substance (such as an enzyme) to produce a specific result. Additionally, when present in sufficient quantities, Alpha Lipoic Acid acts as an antioxidant. The amount of Alpha Lipoic Acid naturally present in the body may not be adequate to obtain the antioxidant benefits. Increasing the amount of Alpha Lipoic Acid through dietary supplementation can be helpful to perform this vital function.

The combination of these two attributes makes Alpha Lipoic Acid a unique antioxidant supplement. Your body does in fact manufacture Alpha-Lipoic Acid, but supplementing it provides benefits beyond its involvement in carbohydrate metabolism. For starters, Alpha-Lipoic Acid is able to deactivate both fat and water soluble free radicals (build-up of excess minerals underneath the surface of your skin) and thereby protect both lipoproteins and membranes; no other anti-oxidant can do this. To give a more understandable answer, for those who just want to know what Alpha-Lipoic Acid can do for them, it helps to take the toxins out of the body thereby improving overall health.

Many of the benefits of Alpha Lipoic Acid is from its' anti-oxidant properties and the associated ability to fight free radicals and regenerate other anti-oxidants. 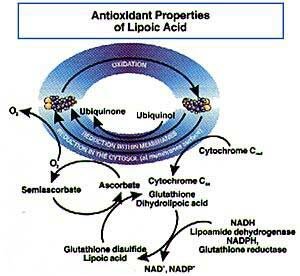 Research in the last decade has strongly implicated oxidative damage within the cells, caused by free radicals, as the cause of many of the degenerative disorders of aging. Included in this group is Alzheimer's disease, Parkinson's, arthritis, cancer, heart disease, diabetes and a host of other conditions. Studies have shown that oxidative damage is seen throughout various portions of the brain cells in Alzheimer's patients.

Anti-oxidants have been shown in numerous studies to halt or reduce oxidative damage in cells and, in many cases, stabilize and even reverse the cell damage. There have been multiple studies in the medical literature indicating that anti-oxidants can have beneficial effects in slowing down and perhaps even reducing the likelihood of developing Alzheimer's disease, Parkinson's, etc.

Alpha Lipoic Acid has benefits for all types of people and particularly those with diabetes or higher than normal blood sugar levels, high cholesterol levels, some vision conditions, (i.e.. macular degeneration) cardiovascular problems such as hardening of the arteries and other conditions associated with the aging process. 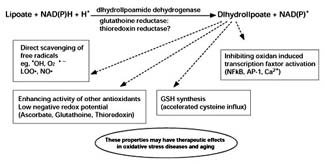 More recent experimental studies have shown that ALA can actually reverse the damage in aging cells of the brain. This was a study published in the prestigious journal Proceedings of the National Academy of science from February of this year. In the study, aging rats were treated with either acetyl-L carnitine or ALA. Both of these nutrients improved performance in memory tasks by lowering oxidative damage and improving mitochondrial function.

How Safe Is Alpha-Lipoic Acid?

Numerous studies have shown that daily intake of 50 mg of Alpha Lipoic Acid produced no specific side effects. Evidence of low toxicity was observed in four different human studies where the daily intake of Alpha Lipoic Acid was between 100 and 600mg for three weeks up to six months. In very high doses given consistently to humans in excess of 500mg per day or more, slight blood glucose lowering effects have been observed. Some reversible allergic skin reactions have also been reported in a few subjects at these high dosages. However, these side effects have only been reported for individual cases.

Are There Any Side Effects?

In clinical studies to date with alpha lipoic acid, there have been no reported serious adverse side effects, even at the high doses used to treat diabetics and patients suffering from neurodegenerative diseases. Among the mild, reversible side effects found in some patients have been allergic skin reactions and possible hypoglycemia in diabetics.

However, according to Dr. Packer, Alpha Lipoic Acid can compete with biotin and interfere with its activity in the body. Therefore, additional biotin should be taken when the daily intake of Alpha Lipoic acid exceeds 100 mgs.

How Much Should Be Taken?

Generally, you should supplement your diet with 200-400 mg per day. Though there has been studies taken using higher doses of ALA, it is recommended that you stick to the suggested dose.

Why Is Alpha-Lipoic Acid So Special?

In addition to the anti-oxidant effects that ALA produces the list below shows why it is such an important supplement. The list of benefits includes:

If Alpha-Lipoic Acid were just another antioxidant, then its value would be far less. After all, there are dozens of ingredients on the market that have powerful antioxidant functions. However, the unique qualities possessed by Alpha-Lipoic Acid, functioning as both a water- and fat-soluble antioxidant make it an intriguing ingredient and a supplement worthy of serious consideration.