This muscle-building herb is a mainstay of testosterone boosters. Learn how it can help support increased testosterone levels during intense training periods.

The Latin name Tribulus terrestris sounds like an earthy Roman emperor. Some people think it rules among muscle-building supplements. Others argue that this 'emperor' has no clothes. Let's see if this is the supplement to give you pecs of a Roman breastplate and cobblestone abs.

Thorn In Your Ride

Tribulus provides native ground cover to many parts of the world. You probably know it by one of its more ominous-sounding nicknames: Puncturevine, Goat-head, Cat's head or Devil's weed. The flowering fruits of this little herb dry out in late spring and harden to form small, spiked seeds. Mountain bikers or hikers with dogs in the Western United States can thank Tribulus for flat tires, the need to buy thorn-resistant tubes, or constantly pulling thorns out of Fido's paws.

Like all herbs, Tribulus contains many active ingredients. However, its saponins - specifically the steroidal saponin protodioscin - is currently believed to be the principal active nutrient derived from Trib. 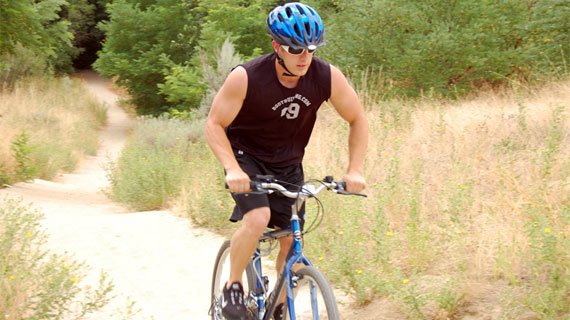 Tribulus has mainly been used as an herbal testosterone booster, or included in formulations to promote increased muscle mass or strength. For example, when researchers from Lithuania recently provided athletes 625 milligrams of a 40%-saponin-containing Tribulus three times per day for 20 days, they reported that circulating testosterone increased significantly during the first 10 days of the experiment. However, it didn't rise further for the remainder of the study.

If Tribulus does affect testosterone levels, it might do so by increasing luteinizing hormone (LH) or follicle-stimulating hormone (FSH). Another explanation to any rise in testosterone could be that it happens as a secondary response to Tribulus' ability to significantly reduce blood glucose.

Tribulus is an herb, but it varies from species to species. Just like how wines produced from the same species of grape but grown in different parts of the world will differ, perhaps significantly, all Tribulus herbs/products can't be assumed to be identical.

In this case, protodioscin concentration - which basically tells you how powerful the Tribulus may be - depends on where in the world it was harvested, and what part of the plant was used. The highest concentrations tend to come from Turkey, Macedonia and Bulgaria. Materials from India, China and Vietnam have reported significantly lower concentrations.

Get The Right Stuff!

If Tribulus raises natural testosterone levels, its effects appear to be dose-specific. In other words, the delivery of active protodioscin seems to be effective only within a tight range. Too little or too much, and it doesn't appear to work. The sweet spot seems to be consuming enough Tribulus so you get between 2.3 and 4.6 milligrams of protodioscin per pound of bodyweight per day.

Look for a Tribulus terrestris extract that's standardized to no less than 6% protodioscin and between 40% and 45% total saponins. Again, ideally, the plant from which the supplement is derived will be sourced from Turkey, Macedonia or Bulgaria.

My theory is that if Tribulus increases circulating testosterone, then it probably does so secondary to promoting blood glucose disposal. I recommend taking Tribulus on an empty stomach with water only or a zero- or very-low-calorie drink. On training days, consume one dose when you wake up in the morning, and another prior to training. On non-training days, consume the second dose mid-day. You could consume Tribulus with meals, but I'm more prone to believe that Tribulus works best when blood glucose is at the low end of your normal range.

Tribulus is commonly stacked with other herbal testosterone supporters, anti-estrogens, cortisol blockers and the like. Personally, I like to keep it simple: Tribulus plus D-Aspartic Acid, Coleus forskohlii, Phosphatidyl Serine and Vitamin D3. If you're 35 or older, add 200 milligrams of DHEA. Sure, there are a ton of other gadgets on the market you could add. Some of them are very cool, and new ones bubble to the surface all the time. But I've never been a fan of the kitchen sink formulations that use too little of too many ingredients.

On Again, Off Again

Some researchers suggested that Tribulus may be what's called an adaptogenic herb. Since adaptogens generally only elicit a significant response while they're working to bring your body back into balance, it may be wise to cycle on and off Tribulus as you would any other adaptogen. For example, you might supplement with Tribulus during periods of extremely intense training or dieting and then cycle-off during recovery phases.

As with any ingredient that might affect blood glucose disposal, you could experience some shakiness or light-headedness if you're extremely sensitive to changes in the amount of glucose present in your blood. Also, if you do experience increased testosterone levels, common side effects are an increase in mental acuity and alertness.

The data on Tribulus is still inconclusive, but remains promising. The current shortcomings may simply reflect a lack of research to dial-in the correct dosing and dosing conditions to optimize the response. Only time will tell.