Glycerine has been considered a revolution in our industry, previously being seen as a non-nutrient additive. Find out why your bar needs glycerine!

Glycerine has been considered a revolution in our industry, previously being seen as a non-nutrient additive. Glycerine is used in the manufacture of some nutritive bars for several unique characteristics including stability, taste, hydration potential, satiety/texture and a slower potential degradation to blood glucose, as compared to an equal dose of carbohydrate.

For the last 3 years, Worldwide Sport Nutrition has led the way pressing for glycerine to be accepted and included in the carbohydrate macro-nutrient family.

Worldwide Sport pioneered the Pure Protein Bar, the best selling nutritive food bar in the business and was the first major company to argue that glycerine was a real, powerful nutrient. Now, the great majority of food bars are formulated with glycerine.

While glycerine is metabolized on the order of a carbohydrate, it does not act completely in the body, physiologically, like a simple carbohydrate or a sugar. It does not elicit the same glycemic response, or have the same effect on insulin secretion or activity as carbohydrates.

Once more, bodybuilders using glycerine bars should feel good on several counts. The FDA now regards glycerine as a valuable result-producing nutrient. Counting glycerine calories as carbohydrate calories does not change the fact that all these bars are still proportionally very low in carbohydrates.

To understand Glycerine's effect upon the Glycemic Index (LGI) and Glycemic Response (LGR) we must fully understand the impact of insulin and blood glucose levels on muscle growth, endurance, performance and fat storage.

Insulin has a direct effect on the metabolism of protein, carbohydrates and fat. Historically, insulin has been more closely associated with "blood sugar" because it does have profound effects on carbohydrate metabolism and its association with diabetes. However, we want to understand as much as possible about insulin's effect on protein metabolism and fat metabolism as well, for the complete benefit of harnessing its anabolic actions and maximizing its effects on muscle synthesis, protein utilization and body fat stores in our bodies.

High glycemic carbohydrates and sugars trigger the release of insulin and activate the negative effects insulin has on muscle growth, endurance, performance and fat storage. Immediately following a high carbohydrate meal, the glucose that is absorbed into the blood stream causes a rapid secretion of insulin (an insulin spike). This in turn causes a rapid uptake, storage and use of glucose by the muscles, adipose tissue (fat) and the liver, as well as other tissues of the body.

After a meal, the fate of glucose is two fold, one to be shuttled into muscle fiber for use as energy and two, insulin channels much of the glucose absorbed from the meal to the liver to be stored in the form of liver glycogen. When the quantity of glucose being transported into the liver exceeds what can be used and/or stored as liver glycogen, insulin promotes the conversion of this excess glucose into fatty acids with the ultimate result of increased fat deposition. Controlling insulin spikes is important to muscle building. It is also vital for fat burning as well as for reducing body-fat storage.

Fat breakdown and the use of fat as an energy source are enhanced in the absence of excessive insulin. In the absence of excess insulin, the enzyme lipase in the fat cells causes stored triglycerides and glycerol to be released into the blood. The free fatty acids then become the main source of fuel to be burned as energy.

So, in the absence of insulin the fat stores are basically burned. We must also consider the importance of free fatty acids and their role in relation to muscle. If the free fatty acid levels are too low, glycogenolysis or muscle breakdown is increased. This is especially crucial during exercise. Thus high insulin can cause muscle to be catabolized. High Insulin has several effects that lead to fat storage in adipose tissue.

Insulin increases the use of glucose by most of the body's tissues. Insulin also promotes fatty acid synthesis. If the amount of carbohydrates ingested exceeds the amount that can be utilized for immediate energy, the excess becomes used for fat synthesis.

So Why Do Bars Need Glycerine? 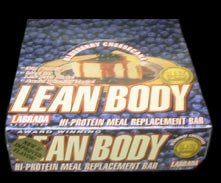 Not all nutrition bars are Low Glycemic, even glycerine bars! Just because a bar has glycerine in it, doesn't make it Low Glycemic or guarantee that it will elicit a Low Glycemic Response. These are more complicated issues.

For a bar to be classified as Low Glycemic, it must undergo specific laboratory analysis and extensive testing to be assigned a number designating where it is on the standard Glycemic Index product and appropriately, found low glycemic.

Conclusion: Glycerine in nutritional bars is a VERY good thing!

Bodybuilding has played a large part in forming my personality. It has given me the discipline that life success demands, and the determination to overcome obstacles.