I am going to go over how to modify Mike Mentzer's controversial 'Heavy Duty' program and mix it with two other controversial programs... The others are 'greasing the groove' and 'Conjugate Approach'. I will describe them here.

Americans are an all or nothing people. Moderation does not appear to be in our vocabulary. We either go all out and eventually burn out or apply no effort and of course accomplish nothing. This phenomenon can be seen in the work place, gym, and probably even in the bedroom (fortunately not mine in regards to the nothing part). Going to extremes is not always bad and there is a place for both.

Sometimes we need to work super hard and other times we are better off doing nothing at all and relaxing. However, when it comes to training, the combination of frequent practice with moderate training loads with infrequent max efforts will serve you very well on your quest to might and power.

Many years ago, a famous bodybuilder named Mike Mentzer realized that the super high volume, high frequency, and high intensity programs that his peers were following was not the best way to go. Unless you had superior genetics and chemical assistance you did not stand a chance on these programs.

After meeting with the innovative and eccentric Arthur Jones, Mike was convinced that brief and frequent high intensity training was the way to go. This entailed doing one set to failure on several exercises three times per week. The program worked very well for Mike and he was back on the road to progress. 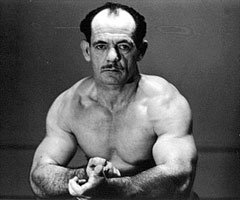 Some time down the road, Mentzer concluded that high intensity training in which you take an exercise to muscle failure had a tremendous stress on the body and could not be done frequently. He started doing infrequent high intensity workouts and started making progress again.

Mike called this new program "Heavy Duty." Basically, Mike advocated doing one set to failure and then taking several days to over a week off. For example, pick a weight that you can do on the bench press and do as many reps as possible. Do the set one time and then wait several days before doing the bench press again. In theory the "Heavy Duty" Program sounds great.

Hit training hard and then rest up before doing another session. However, in practice the program did not work too well for most trainees. Sure, many people had great results the first month that they tried HD (as you will with just about any program). However, after a month or so, the trainee adapts to the stimulus or in the case of HD, lack of stimulus and progress desists.

The trainees that really benefited from HD were trainees that were severely over trained. Mentzer would have trainees take two weeks off from training before starting the HD program which certainly gave them some much needed recovery time. This alone is enough to allow trainees to get back on the road to progress.

Following up with infrequent training allowed the stimulus-addicted trainees a chance to give their CNS some recovery time as well. So far HD sounds great right? Unfortunately it has some flaws that need to be addressed.

One of the main reasons why the HD program did not work well for many trainees is not the fact that it called for training to failure (although that can be problematic), but the fact that the workouts were far too infrequent. Mentzer recommended that trainees take 7-14 days off between each exercise to maximize recovery.

To illustrate further, if you do the military press on November 1, you will wait until up to November 14 before doing it again. Imagine applying this concept to playing the piano or gymnastics. At best you would maintain your skill level. However, most likely your skill level would decline.

The problem with the HD program is that it did not take into account the fact that lifting weights is a skill. Don't agree? Think that doing an exercise such as the military press is as simple as pressing a weight from your chest to the lockout position? Then how come you have not been able to press your bodyweight after ten years of training?

Back in the day two hundred pound standing military presses were common, now they are as rare as women in Los Angeles without breast implants (not that I have a problem with that), but I digress.

Think about a time when you had to take several months off from training. Remember, that first workout back in the gym. Remember how everything just felt off? The main reason why this occurred is not because the muscles got weaker, but because your CNS had not been engaged for a while.

In some countries if you do not have sex for a long time, you are considered a virgin again. Well, to your CNS, if you do not hit a certain exercise for a long time, when you do finally hit it, your CNS is like a virgin again, no pun intended. Fortunately, it does not take too long to get back into synch. Regardless, the best way to get back into synch is to practice the skill of strength training.

The key is to practice the skill of strength training without burning out. As Vladamir Zatsiorsky states in The Science And Practice Of Strength Training...

One major thing that Mike Mentzer was correct about was the fact that maximum effort sessions should be infrequent. Maximum efforts do take a big toll on your central nervous system and cannot be executed frequently. Only average people are at their strength peak daily. Serious strength athletes only peak a few times a year if even that.

What Mentzer was wrong on was that all training should be very infrequent. Training infrequently will make you feel like you have never done the exercise before. Each time you train an exercise you will have trouble getting into the groove.

How Can We Make HD Effective?

For example, do a few sets of the military press in the morning, afternoon, and evening. Avoid training to failure. In fact do not even come close to training to failure. You should feel fresh and strong after each set. Another way to look at it is to take your six-rep max on an exercise and do sets of three several times a day five to six times per week.

Of course, unless you work in a gym or work at home, it will not be easy to get in several sets through out the day. Not a problem. Just do two to three sets of three to five, five times per week and take two days off.

Once a month take a dose of Heavy Duty and go all out on each exercise. Then take five days off and adjust your practice sets accordingly. Focus on compound exercises that will provide the most bang for you buck. Cut out or at least reduce all isolation work.

Here are some sample programs that you can follow:

Louie has his athletes rotate exercises every few weeks. They work up to a max on a given exercise and then rotate it with another drill. For example, work up to a max set on board bench presses, and then switch to floor presses. In addition to being a lot of fun, the conjugate approach is very effective and certainly worth taking advantage of.

Thus after, two months of applying GTG and HD to the same exercises, rotate then out for a while with some other effective selections. 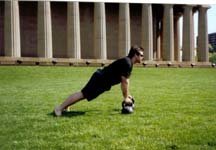 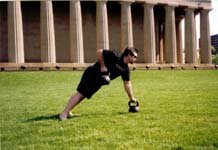 You get the idea. Stick with the new exercises for a month and after you do your monthly max set, incorporate some new drills in.

Enough reading, time to practice the art of strength training often and go all out once a month. Get started today and email me with your results at mahler25@yahoo.com.

Mike Mahler is a strength coach based in Los Angeles, CA. Sign up for tons of free training tips at www.mikemahler.com