Go Veggie Go: Women Making It On A Vegetarian Diet

In a protein crazed world these three women have done just that. These dedicated athletes show us how it is done their way and expel the myths that vegetarianism is all about washed out hippies and lentil stew.

These days most well read sports nutrition literature goes a little something like this: vegetables, fruit, complex carbohydrates and lean sources of protein such as chicken breast, fish and egg whites. I am sure you are familiar with this line of thought? But what happens if you choose to omit one, two or all three of these last foods out? What is there left to eat!?

In a protein crazed world these three women have done just that. They have defied the odds and not only lived, but thrived on a vegetarian diet. These dedicated athletes show us how it is done their way and expel the myths that vegetarianism is all about washed out hippies and lentil stew.

Educated and determined to make a stand in the veggie world, 32 year old Kristin gave up a career in television and media to dedicate her life to fitness and nutrition.

Kristin started off her vegetarian lifestyle as a vegan for several years and is currently living on a pesco-vegetarian diet (which includes a small amount of fish and minimal dairy products.) However in her heart she knows that veganism is the best diet for her and plans to one day make the switch back.

It has been nine years since this figure competitor and personal trainer gave up eating red meat. "I have experimented with all types of vegetarian diets" she mentions "and have learned through this experimentation that nutrition plays an integral role in one's well-being."

Once a sufferer of migraine headaches, her bouts have been a lot less frequent since the dietary change. It was an ex boyfriend (an Iron man tri-athlete and strict vegan) who introduced Kristin to the book 'Diet For A New America' by John Robbins which prompted the transition.

Kristin always knew she wanted to compete but just wasn't sure where to start. "Fitness America was too pageant-y for my blood, fitness shows involved too much gymnastics, and bodybuilding was out of the question. I happened upon the Galaxy event in a magazine and knew right away that this was the competition for me. Miss America meets American Gladiators... excellent!"

Not only dedicated to figure competing last year she also tried her hand at the Brooklyn half marathon and made it through with a time of two hours and thirteen minutes.

Although Kristin feels that her diet supports nearly everything she does, one of the key benefits she has noticed on a vegetarian diet when it comes to training is the fact that because she eats so clean and healthfully preparing for competition is much easier because she remains pretty lean all-year round.

On season, Kristin is fairly regimented with her diet, being sure to eat lots of fresh vegetables, clean complex carbs, vegetarian protein (such as kidney beans and tofu), egg whites and a small amount of tuna. However, "when I'm not getting ready for a show my diet can consist of almost anything" she points out. "I really like experimenting with vegan and Indian cooking so that's pretty common at meal times."

Kristin trains smart to achieve her results working out with weights four times a week, cardio is done for 30-60 minutes five days a week and occasionally she will take a day off. "Lately I've gotten into a lot of plyometric training with a friend who does obstacle course competitions and this has been terrific for lower body development. I also spend a lot of time rock climbing outdoors as well as at a climbing gym which has been terrific for upper body training."

Despite common misperception Kristin finds plenty of energy in her pesco-vegetarian diet to get her successfully through each day "I would like to expel the myth that a vegetarian diet results in no energy and that you will become skinny and gaunt. Like anything else in life, you need to learn how to become vegetarian properly. You can't live on gummy bears and soda and expect to feel great," she says.

Although she does not go around trying to actively convert anyone to vegetarianism she adds "when the benefits are so great from a vegetarian-based diet and the goal ultimately is fitness and health, how could you not give it a chance?"

Full of energy and with a keen zest for life, 28 year old Katie has been a pro surfer since 2004. Katie took the slow road to becoming vegan, gradually eliminating one food group at a time. Now after three years of living successfully on such a diet she finds the biggest challenge, in her words, "is eating enough!" Environmental sustainability, animal rights, and health concerns are just a few of the reasons why Katie chooses to follow a vegan diet. 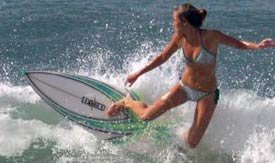 Katie has been surfing since 1996 and under the encouragement of her first teacher (a local woman who had been surfing for 20 years) she entered her first amateur competition and much to her surprise she won. From then on Katie has continued to ride the waves of success.

Because surfing is something Katie does year round it seems she is always on the go. When talking about her training she explains "my schedule changes depending on where I am and what time of year it is."

When she is at home in the winter Katie has to constantly challenge herself to find new ways to stay in shape. This usually involves swimming, running, cycling and yoga. Unfortunately, she says, "surfing is only two - three days a week depending on the conditions." In the summer however Katie is in the water a lot more and alongside her surfing and early morning runs she also finds the time to teach surf lessons up to four hours a day six days a week.

It's on the surfing trips when Katie really gets to indulge in her passion as surfing takes up most of the day. Katie can be in the water for as much as five hours at a time "I break long enough to eat and reapply sunscreen" she mentions enthusiastically.

After adopting a vegan diet Katie lost some excess weight and notes that being lighter has helped her generate more speed in surfing. Katie also thinks that her overall fitness level has improved because of her diet because "it is more nutritionally complete than it was before I was vegan." She feels that her vegan diet is a very positive way to fuel her body.

Although she travels a lot, Katie finds that living on a vegan diet really helps to counteract jetlag. The mental discipline it takes to follow a vegan diet has also taught her to be more focused, which is especially helpful during a competition.

The day for Katie normally starts off with a smoothie and varies from there on depending on whether she is at home or on the road mainly because she often loses the ability to cook for herself when traveling. Katie is not too strict with her diet (obvious vegan guidelines aside) and always tries to incorporate lots of fresh fruit and vegetables. She eats pretty simply when traveling but admits to indulging in veggie takeouts when in the US.

This vegan lifestyle means a lot to Katie and amongst lessons of tolerance and compassion she thinks that that "it is a way to express your desire to make a change in this world by making a change in your own life."

Passion and enthusiasm are the two words that come to mind as I read through Tonya's interview responses. A pro dancer since the age of 15, Tonya believes "we are what we eat and I'd rather be a sexy young coconut than empty puffy pasta - even if it is whole wheat!"

Growing up in a small farming community and being exposed to the 'slaughterhouse rules' profoundly affected Tonya and at the age of eight, "vegetarianism became my default lifestyle" she explains. Many things have changed since that day but Tonya's conviction in the diet has stayed the same.

Now a raw vegan, at the age of 28, Tonya feels the best she ever has in her life. She has an endless store of energy and her once problem skin "simply glows" and as an athlete "my bodyrecovers in half the time it used to from strenuous activity or injury."

Tonya's training schedule is anything but ordinary. "As a professional dancer, it is important to keep the body ready for movements that push your coordination, flexibility and strength in a variety of unpredictable motions."

A variety of exercises are required to keep Tonya in tip top condition and to keep her body "ever-ready." Some such activities include; weight lifting, bikram yoga, walking, cycling and of course burning it up on the dance floor at the local club. "Anyway you look at it though, I train an average of three hours a day five days a week taking off an entire seven days every sixth week or so."

As a Raw Vegan Tonya's diet is based around in season, local, organic and uncooked produce and as a result it varies a lot from day to day, season to season, city to city.

"After 20 years of being vegetarian and ten years vegan, I thought I was healthy. That was until I went raw, it has been three years now and the difference is profound!"

During the off-season (or when injured) Tonya likes to use the time to cleanse as she feels it better assists her body in the healing process. She loves the feeling of personal integrity that the raw food lifestyle brings. This new way of eating is also offering relief from her once medicated bi-polar life.

When asked why she has chosen this lifestyle she replies eagerly "to find out how good life can get!" Tonya excels on her raw vegan lifestyle and would like us to know that this lifestyle is not difficult "I have been traveling for five years now, without a home and a kitchen. I have thrived on this diet in every city in the nation and let me tell you, there is nothing easier or more fun!"