Fuel To Burn: Why Only Fat-Loss Fools Train On An Empty Stomach

Cardio on an empty stomach has long been touted to burn fat. But the downsides outweigh the benefits.

It's a common practice for athletes, bodybuilders, and other fat loss die-hards to wake up early, skip breakfast, and jump right on the treadmill with an eye toward obliterating body fat. This strategy has been employed by many great fitness athletes, and has received credit for helping them getting rid of those pesky extra pounds.

The common rationale for the fasted morning workout is that low glycogen levels cause the body to use fat rather than carbohydrates for fuel. Unfortunately, this flies in the face of basic exercise science and physiology. Let me explain.

The benefits of food consumption—particularly of glucose and protein—far outweigh any perceived benefits from fasting. Having these substances available as fuel will limit protein loss and thus maintain muscle mass, increase performance, and increase fat oxidation post-exercise. For most of us, these are the goals that cause us to work out in the first place.

Normally, the body will use all fuel sources—including carbohydrates, protein, and fat—during exercise. Depending on the intensity and duration of exercise, one will become the primary fuel, but only for a limited time.

When using carbohydrates as the fuel source for a workout, the body will shift toward greater usage of fat post-workout. Alternatively, if the body burns fat during cardio, it will use carbohydrates afterward. High intensity levels of training, such as HIIT training, produce a greater dependence on carbohydrates as fuel during workout. Then, following this workout, those who follow HIIT will continue to burn fat for far longer than they were in the gym.

It's important to remember that this fuel delivery system operates on a continuum—it's not simply one fuel source or the other. Many factors determine which fuel source the body will tap at any given time, and it is better to think of fat-burning goals in a time frame of days rather than minutes. In other words, the fat loss from any one early-morning cardio session isn't going to have a significant effect on body composition or overall fat loss.

So basic physiology casts doubt on the effectiveness of the fasted workout. What's more, specific research hasn't been much more supportive.

In one study at the University of Texas at Austin, moderately trained individuals were divided into two groups. One fasted prior to performing low-intensity cardio, and the other consumed carbohydrates. There was no difference between the groups in the amount of fat oxidation during the exercise until the 80-90-minute mark of exercise, at which point there was slight increase in fat oxidation for the fasted group. In the same study, moderate-intensity cardio produced no difference between the fasted and fed groups. 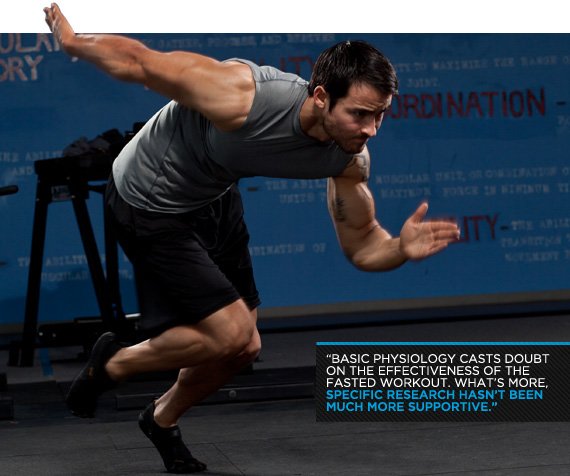 Two other studies took the same idea and applied it to endurance athletes. Again, no differences were found between fasted and fed groups. The fasted groups in these studies showed evidence of fat being liberated from adipose tissue, but that fat was never fully oxidized. This means that it was re-established into fatty tissue on the body after the exercise bout. So the technique failed the primary goal of early-morning fasted cardio.

Eat Up And Still Burn

From an exercise perspective, there are multiple reasons to eat before working out. First and foremost, attempting to engage in high-intensity training on an empty stomach will undermine your performance. Having a pre-training meal primes the body for performance and provides the fuel needed to satisfy the demands of the session. Training intensely on an empty stomach will demand caloric expenditure that the body cannot fully meet, leading to diminished returns.

Another benefit of eating before exercise is the thermogenic effect from the digestion of the food, which multiple studies have shown actually improves fat oxidation. The process of digestion causes the body's temperature to rise, leading to a greater use of nutrients during exercise. The high level of oxygen consumption during intense exercise intensifies this effect. Indeed, it has been shown that greater use of both fat and carbohydrates occurs after consuming glucose before low- and high-intensity training when compared to not consuming glucose before exercise.

If your goal is muscle growth or maintenance, fueling up is doubly important. Going into cardiovascular training hungry puts you at risk of significant loss of protein. When each gram you consume is valuable, fasting isn't your fat-loss friend. 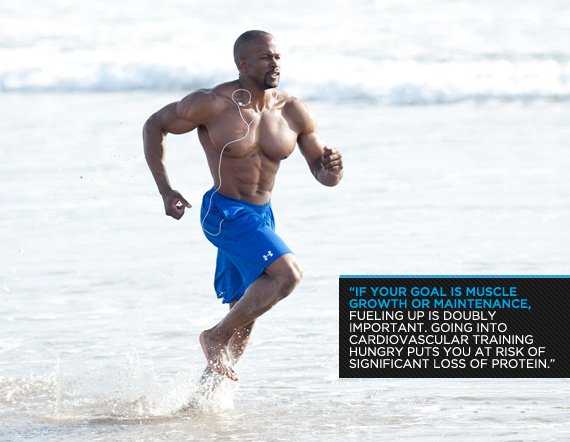 So what's to explain the success many claim with fasted early-morning workouts? Well, the person is working out, and this burns more calories. The same would hold true if you went from training once per day to twice per day, or if you changed from a sedentary lifestyle to regular exercise. As the caloric demand on your body increases, chances are you'll lose weight.

That's a positive development—but training in a fasted state sets you up to lose the muscle you have worked so hard to create. Eat before you leave for the gym for a better workout experience and better results. And did we say you get to eat breakfast?