Kirk Miller is a Physique Elite master trainer under the tutelage of Kris Gethin and Neil Hill. Follow his fitness plan to get lean and build muscle!

Like many young Brits, Kirk Miller first engaged his athletic engine on the pitch.

He was three years old the first time his dad put a ball in front of him. His early experiences with Coventry City helped prepare him for a life in the gym.

He learned so much about training over the years that he couldn't keep it all to himself.

Now, under the tutelage of Kris Gethin and Neil Hill, Kirk has become a Physique Elite master trainer.

He has developed a functional physique to tackle any oncoming attack and overcome all obstacles, and we've got his full fitness plan.

Personal trainers learn by practicing on themselves before training clients. Kirk Miller has used his body as an iron laboratory, and his body has gone ballistic.

This nutrition plan is as straightforward as it gets. Eat protein, fats, and carbs in proper portions; cheat to save your mind; and earn everything in the gym.

When you break yourself down over and over again, six times every week, every month, every year, you need a little help to rebuild. Kirk Miller relies on a smart supplement stack.

Kirk Miller's first love was football, but throughout his school years, he participated in a mixture of athletics like cross country and other endurance sports. In his late teens he was picked up by Coventry City Football Club. 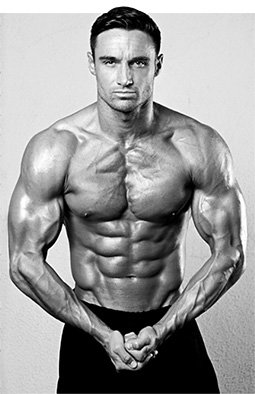 "I thought anything was possible in life. I carry that mentality of positive attitude into everything I do."

"They were in the Premiership then and I had an apprenticeship there, from age 16-20," Miller says. "When I played football, I developed a love for the gym as well. The one thing I picked up from my short football career was winning and doing the best I could."

In 2010, after his football career ended, Miller's life took a dramatic turn after he entered and won the Men's Health Cover Model Competition.

"That changed my life, but it changed my mindset more than anything," Miller says. "It was a switch in my head thing, where I thought anything was possible in life. I truly believe that now and carry that mentality of positive attitude into everything I do."

Kirk put the wheels in motion to become a qualified personal trainer. He was chosen to enter a master training program with Kris Gethin and Neil Hill, two of the world's elite trainers.

The global qualification this powerful duo
created is called Physique Elite. Miller was handpicked to be one of the trainers to be potentially certified in the United Kingdom, to make a difference not just in the UK, but around the globe.

"I see other people in the gym, and I absolutely buzz off seeing people do hard work," Miller says. "I love it, seeing people train hard, pushing themselves to the limit. That gives me a burst, gives me an adrenaline rush. There is nothing better than when you push yourself that hard. The mental endorphin release is incredible. I think that is just as important to me as the physical changes that come about during training."

Q
Bodybuilding.com: Did your experience on the pitch help you understand anything about people's desire to train intensely?

Kirk Miller: My three-year apprenticeship with Coventry City taught me the importance of giving it your all because of the caliber of people I was surrounded by. Seeing these guys always striving to be the best they could be pushed me to always strive to achieve that little bit more.

Watching these guys training week-in, week-out, I always noticed that the ones who put the practice in were the ones who succeeded at that higher level. Hard work really does pay off, regardless of natural talent. 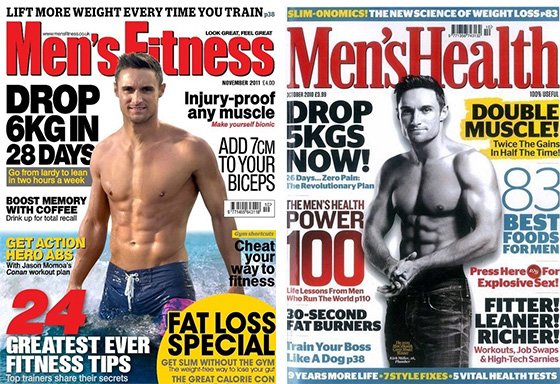 You don't seem to lack motivation, but sometimes your clients probably do. How do you keep them positive and pushing hard?

I keep my clients motivated by setting them short- and long-term goals. This keeps them continuously motivated to achieve some kind of goal on a weekly or fortnightly basis. It could be anything from progressing with a resistance training exercise or increasing cardio fitness by going that little bit farther each week. The feeling of achievement releases mental endorphins to keep you wanting more.

What did you learn about your body, your endurance, and your mental strength from the Royal Marine Challenge?

Training for an unpredictable terrain made me realize just how important functional training is. Not only for the Royal Marine course, but also in everyday life, whether it be getting in and out of your car or participating in a physical sport.

The prep routine I followed developed my mental strength because it was out of my comfort zone compared with the typical bodybuilding split I usually follow. It certainly pushed the boundaries of what I thought I was capable of.

In my opinion, pushing yourself like this is the only way you will ever improve.