Myostatin, The Future Not Yet Here

Myostatin is described as a protein found in the blood that appears (research is still in the early stages) to set a limit on the muscle your body can build.

There is much to be said about myostatin, where to begin is the difficult point. Myostatin is described as a protein found in the blood that appears (research is still in the early stages) to set a limit on the muscle your body can build.

Many companies have jumped on these findings and created products that are suppose to limit myostatin in your body. The results of this would include, but not be limited to, muscle growth never halting, increasing the number of muscle fibers, not just increased size in existing muscle fibers but new fibers altogether, and fat loss while gaining muscle. 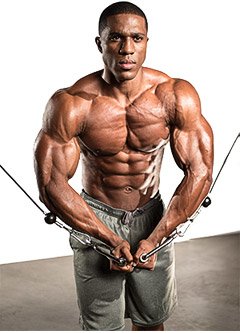 "Genetically gifted bodybuilders have very low levels of this protein in their bodies, which is believed to be the cause of their muscle building gifts"

What proof is there of this? Genetically gifted bodybuilders have very low levels of this protein in their bodies, which is believed to be the cause of their muscle building gifts. Also in experiments where animals were born without myostatin they grew muscle endlessly with little exercise. This research is paving the way for a great product in the future. Unfortunately that time is not yet here.

There is a research project called "The Myostatin Project" which offers much information towards the facts of just how far along we are in this research and it has been described as being in very early stages. The research is being done by Pinnacle nutrition, which is a company I don't trust or support, which surprised me greatly when they were the ones who said there is no proof this product works. They claim they created their own myostatin product due to pressure they received from Biotest when they (Biotest) got a hold of the myostatin information and quickly released an inhibitor.

They (Pinnacle) go on to say that they are "very early in understanding how myostatin controls muscle growth" and they weren't even sure manipulation of the myostatin gene would even affect muscle mass! It was also stated they weren't sure how much of an inhibitor would be required or even how long it would take to see results. They believed it might take time to observe results, as muscle fibers must increase in size. Whether this is true or a marketing scheme to entice people to take their product for long periods of time with no guarantee of any results still remains in the dark.

Will You Be The Human Guinea Pig?

With little research and hardly anything known about myostatin at all, let alone now knowing proper doses or any possible side effects of such a drug I believe it is far too early to be making products containing substances claiming to inhibit myostatin, especially some of these exact companies are the ones claiming they know nothing about the gene they are trying to inhibit! Pinnacle claims the worst that can happen by using its product in such a premature stage is a small loss of a bit of money. I however believe that a gene altering drug in it's infancy stages should not be taken by anyone who is unwilling to be a human guinea pig.

Research seems to be underway, I plan to wait and see where it leads. I love the idea behind a myostatin inhibitor. Imagine destroying your biggest obstacle as a bodybuilder, your gene limitations. It will be an exciting time if/when this gene can be manipulated, I believe we just have to wait a bit longer.

Dean Goudie has been bodybuilding for about two years. Since he started lifting, he has gained over 50 lbs.